The Andhra Pradesh government has come forward to supply onions at a highly subsidised rate of Rs 25 per kilogram, subsidising the rest of the cost. 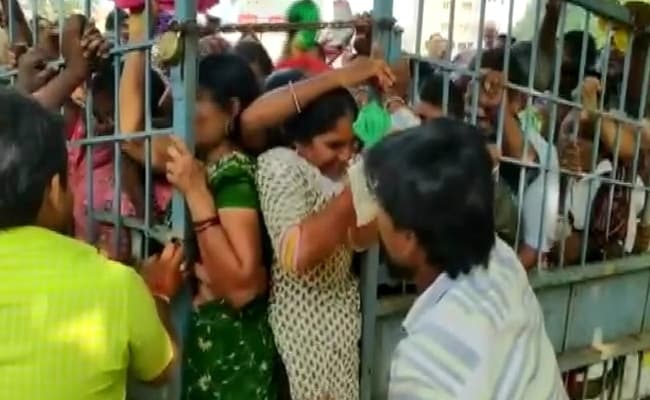 Residents of Cheepurupalli village in Vizianagaram rushed inside the market for subsidised onions.

The rush for subsidised onions being sold at Rs 25 a kilogram led to a near-stampede situation at a farmers' market in Andhra Pradesh's Vizianagaram district on Thursday.

At a time when onions are being sold for over Rs 100 per kg in many parts of the country, the state government has come forward to supply it at a highly subsidised rate of Rs 25 per kilogram, subsidising the rest of the cost.

The only condition, however, is that each family will get only one kilogram of onions.

When residents of Cheepurupalli village in Vizianagaram came to know that onions are being sold at a cheaper price, they rushed to farmers' market on Thursday morning and waited for the authorities to open the gate to the market yard.

When the stocks were brought in after a long wait, chaos ensued as women who had been waiting for a long time, along with men and children, rushed inside and many of them, including the elderly, were pushed to the ground.

According to reports, the situation was brought under control after the police reached the market.

No serious injuries were reported.

Amid the spiraling onion prices across the country, the central government on Tuesday reduced the stock limit for the wholesale and retail traders by 50 per cent. The wholesalers would no longer be able to stock more than 25 tonnes of onions. For retailers, the limit is five tonnes. Onion prices remain high in the range of Rs 75 to Rs 100 per kg across major cities of the country. In Kolkata, the prices neared Rs 150 per kg. Opposition parties have been attacking the government over the issue amid protests in parliament.