Chief Minister N Chandrababu Naidu stated this after conducting an aerial survey of the affected areas. 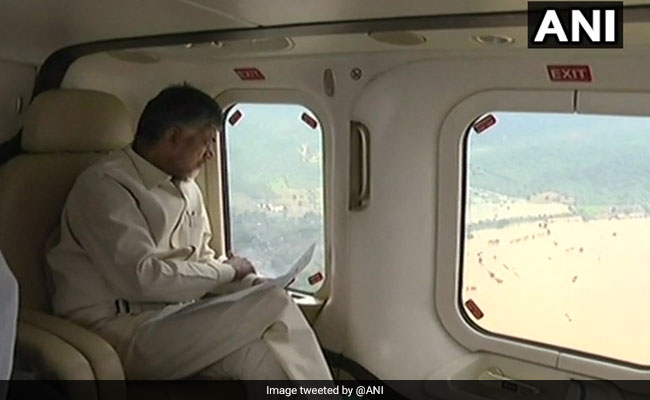 Floods in the river Godavari in East and West Godavari districts in the last one week caused damage to the tune of Rs 600 crore, Andhra Pradesh Chief Minister N Chandrababu Naidu said at Amaravati today.

He announced a compensation of Rs 25,000 per hectare to the crops damaged in the flood.

The chief minister stated this after conducting an aerial survey of the affected areas.

Paddy crop in about 11,000 hectares in the two districts considered the rice bowl of Andhra Pradesh remained submerged, though agriculture department officials see some chance of revival once the water in the fields dries up.

Cotton too suffered extensive damage in about 1,300 hectares, but there is no chance of any revival, the officials said.

Official sources said the state government would submit a report on the flood damages to the Centre, seeking financial assistance, after a complete assessment in the next few days.

The two districts have been ravaged by the floods for the past six days.

The chief minister reviewed the situation with Collectors of the two districts and other officials in Rajamahendravaram airport and later told reporters that steps would be taken to overcome the submergence problem of Erra Kalava (red canal) on a permanent basis.

"This canal caused the major damage in West Godavari district," he pointed out.

Causeways damaged in the flood would be rebuilt while roads in the region would be repaired at a cost of Rs 35 crore, he added.

Meanwhile, the Godavari continued to be in spate with the flood discharge crossing 15.24 lakh cusecs at Sir Arthur Cotton Barrage in Dowaleswaram by this evening.

On the other hand, flood discharge in river Krishna at Prakasam Barrage in Vijayawada fell by half to just about 75,107 cusecs this evening from a high of 1.50 lakh cusecs last evening.

Inflow into the Srisailam reservoir, however, witnessed a sharp increase today with the level almost touching the Full Reservoir Level (FRL).

Copious inflows of 1,83,579 cusecs from Srisailam has resulted in Nagarjuna Sagar slowing inching towards the FRL, with the storage now at 216.88 tmc ft (553.2 feet).

However, about 100 tmc ft more water is required for Nagarjuna Sagar to fill to its capacity of 312 tmc feet.