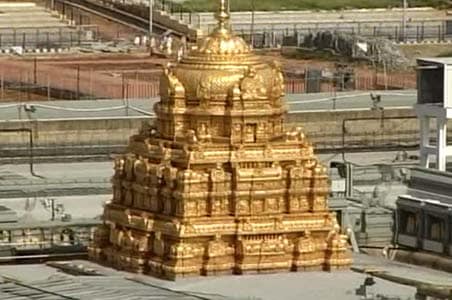 Tirupati: The famous hill shrine of Lord Venkateswara near here netted a whopping Rs 1,700 crore income in 2011 during which 22 million devotees, including a galaxy of VVIPs, offered their worship.

While about Rs 1,100 crore of income came from cash offerings by devotees in the temple hundi and interest on investments including gold deposits with nationalised banks, sale of daily tickets for rituals and darshan fetched more than Rs 200 crore during the year, officials of Tirumala Tirupati Devasthanam (TTD),which manages the temple, told Press Trust of India.

Besides, devotees also offered diamond, gold and silver jewellery worth several crores of rupees to the presiding deity of the cash-rich shrine during the year.

Among the VVIPs who visited the temple during 2011 were the first citizens of India, Sri Lanka and Nepal.

President Pratibha Patil along with husband Devisingh Ramsingh Shekhawat and other family members visited the temple on July 7, on her wedding anniversary.

After her worship, she inaugurated a mega free meal complex constructed by Tirumala Tirupati Devasthanam (TTD), for the benefit of devotees on the hills at a cost of Rs 33 crore.

Sri Lankan President Mahinda Rajapaksa with his wife offered their prayers to Lord Venkateswara on April 2, a day ahead of the ICC World Cup final match between India and the island nation republic.

The first President of Nepal Ram Baran Yadav, along with family members and a team of Nepalese officials, offered prayers at the hill shrine on January 30.

BJP President Nitin Gadkari offered prayers to Lord Venkateswara on the hills on May 14.

Promoted
Listen to the latest songs, only on JioSaavn.com
Ahead of every mission Indian Space Research Organisation Chairman Dr K Radhakrishanan, visited the temple to have blessings of Lord Venkateswara.

Of the about 22 million pilgrims visited the over 2000-year-old temple in 2011, about 10 million devotees including infants, women and old got their heads tonsured as fulfillment of their vow before entering into the shrine.