Long to very long queues were seen in state's Guntur district, with many people not wearing masks and defying the mandatory social distancing norms.

A large number of customers were seen outside the liquor shops in Andhra Pradesh.

A large number of customers were seen outside the liquor shops in Andhra Pradesh despite a 25 per cent increase in prices by the state government.

Long queues were seen in state's Guntur district, with many people not wearing masks and defying the mandatory social distancing norms.

The state government order, on the other hand, allows only five customers at one shop at a time, duly following the social distancing norms.

Similar scenes were witnessed in Chittoor where scores of people were seen pushing and shoving each other in long queues, with a policeman trying to control the situation.

The sale of liquor resumed today in the state after all shops were closed following a lockdown imposed by the central government on March 25.

The state is expecting an additional revenue of Rs 5,000 crore annually if the sales remain the same, Excise Commissioner Vivek Yadav told NDTV. The government was facing a Rs 50 Crore revenue loss per day after closing of the liquor shops.

The long queues were seen despite the government's imposition of a new "prohibition tax" to discourage people from consuming alcoholic beverages.

The prohibition tax could be up to 25 per cent on the existing prices, Special Chief Secretary, Industries and Commerce, Rajat Bhargava, had said on Sunday. 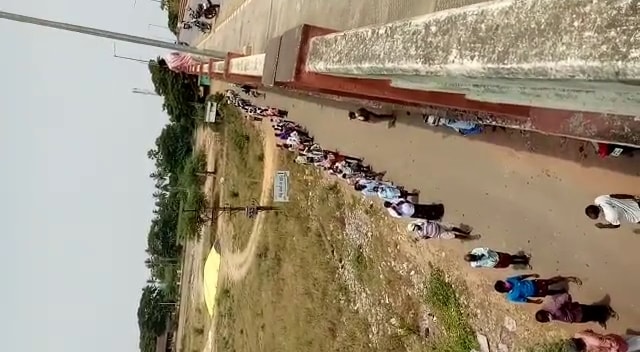 An aerial view of crowds outside a liquor shop in Guntur.

The entire liquor business in Andhra Pradesh is currently under the control of the state government, with the AP State Beverages Corporation operating the retail outlets.

The state has opened all liquor shops between 11 am to 7 pm, except in the COVID-19 containment zones and clusters.

The bars, clubs and AP Tourism Development Corporation outlets have not been given permission to sell liquor.

"While liquor sale is being resumed, the state government's policy is to discourage people from consuming liquor," Mr Bhargava had said.

Chief Minister Jaganmohan Reddy has mooted the idea of prohibition tax in October last year. The Chief Minister had proposed the additional tax with reduction in number of liquor shops by 20 per cent from 4,380 to 3,500.