Massive Fire Breaks Out At Tyre Godown In Ahmedabad, No Casualties

All the residents of the 10-storey building were evacuated by the fire department personnel after the blaze engulfed its ground floor. 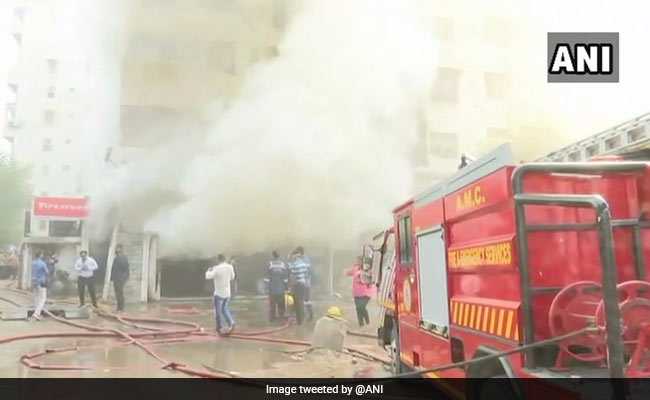 Fire broke out at a tyre showroom and godown in a residential-cum-commercial building.

A massive fire gutted shops located on the ground floor of a multi-storey commercial-cum-residential building whose residents were evacuated safely in Ahmedabad in Gujarat Monday, an official said.

No casualty was reported, he said.

All the residents of the 10-storey building were evacuated by the fire department personnel after the blaze engulfed its ground floor which housed several shops, said additional chief fire officer Rajesh Bhatt.

The fire started from a shop dealing in tyre remolding and sale at around 2 pm, and quickly spread to other shops on the ground floor, he said.

The inferno at 'Sreeji Towers' caused massive fumes which reached the top of the building located in Vastrapur locality, Mr Bhatt said.

"A fire broke out in the commercial establishment located on the ground floor of a ten-storey building. A total of 12 fire tenders were pressed into service.

"The fire turned massive with fumes reaching till the top of the building," he said.

All the residents were safely evacuated by the fire department personnel, he said.

It took several hours to put out the fire, whose cause will be ascertained by a forensic team, Mr Bhatt said.

The place, where the fire broke out, is packed with tyres and has the same entry and exit point. Luckily, the flames were doused without any fatality or injury, he said.