YouTuber Hurled Racist Taunts At Gay Reporter. The Company Did Nothing.

YouTube's policy explicitly forbids hate speech, which it defines as "content promoting violence or hatred" against people or groups based on things such as race, sexuality, nationality, immigration status and other things. 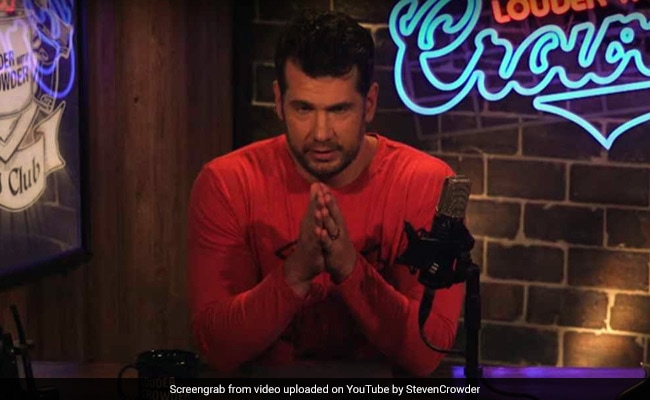 Steven Crowder said he's the victim of forces that seek to silence him.

Carlos Maza, a video producer for the news site Vox, said the harassment began about two years ago.

Steven Crowder, a right-wing commentator and comedian, had begun to call out Maza's sexuality and his race - Maza is gay and Latino - in some of his videos on YouTube.

And last week, Maza said, he finally grew sick of it. He edited a video of all the epithets that Crowder hurled at him over the last couple of years into a video and uploaded it to Twitter.

In an edited video compilation, Crowder calls Maza a "lispy sprite," a "little queer," "Mr. Gay Vox," "Mr. Lispy queer from Vox," "an angry little queer," "gay Mexican," "gay Latino from Vox," and more. Crowder also breaks into a caricatured gay voice at points and appears to pantomime oral sex with his microphone. During one of the segments, Crowder wears a shirt that says "Socialism is for f--s."

The tweet took off, and YouTube said in response that it would investigate Crowder's videos. But the company announced Tuesday night that Crowder's videos didn't violate its policies and that it would leave them on the site. The decision drew a torrent of criticism as concerns grow about YouTube's resolve to moderate its content.

Maza, who is of Cuban descent and has been open about his sexuality online, said he was upset by YouTube's decision, saying he believed the company was allowing itself to be used for racial and sexual harassment.

"It seems to me to be a clear violation of that policy," he said in an interview. "I understand that speech always involves gray areas, but that it's hard to enforce hate speech policies should not distract from the fact that it's sometimes extremely clear-cut. And this seems to be one of those cases."

YouTube's policy explicitly forbids hate speech, which it defines as "content promoting violence or hatred" against people or groups based on things such as race, sexuality, nationality, immigration status and other things.

Using stereotypes that promote hatred is also prohibited. The company also forbids "behavior intended to maliciously harass, threaten, or bully others," including content that "is deliberately posted in order to humiliate someone" or that "makes hurtful and negative personal comments/videos about another person."

But it said Crowder's videos did not violate any of these policies.

"Our teams spent the last few days conducting an in-depth review of the videos flagged to us, and while we found language that was clearly hurtful, the videos as posted don't violate our policies," the company said in a statement posted to social media on Tuesday. "As an open platform, it's crucial for us to allow everyone-from creators to journalists to late-night TV hosts-to express their opinions w/in the scope of our policies. Opinions can be deeply offensive, but if they don't violate our policies, they'll remain on our site."

On Wednesday, the company changed course, despite the findings of its first "in-depth review," saying it decided to suspend Crowder's ability to run ads on and monetize his videos. The company did not say why its determination had changed overnight.

"We came to this decision because a pattern of egregious actions has harmed the broader community and is against our YouTube Partner Program policies," it said on Twitter.

Gizmodo had published an emailed response that Google's press team had sent to reporters earlier in the day that the tech company said was "okay to paraphrase," but Gizmodo published it in full.

On social media, some people took issue with YouTube's rationale, which they said indicated that hateful expressions could be permitted as long as the opinions were transmitted in the appearance of a debate.

Crowder, who did not respond to an immediate request for comment sent to his website, has defended himself in videos on his channel, saying he's the victim of forces that seek to silence him.

"That's friendly ribbing," he said, of the language he used about Maza. "Did I ever offhandedly use the term lispy queer? I really don't remember it, but it sounds like me. Why? Because you speak with a lisp and you refer to yourself as a queer... It's funny, and this is a comedy show."

Crowder said that the criticism of his videos was an example of a powerful media company, Vox, trying to "silence voices that they don't like."

YouTube "appears to be broken in some ways that we can't tolerate," Vox Media said in a statement. "By refusing to take a stand on hate speech, they allow the worst of their communities to hide behind cries of 'free speech,' and 'fake news' all while increasingly targeting people with the most offensive and odious harassment."

But Google's lax enforcement of YouTube has long made it a target of criticism, particularly on the left. The company has regularly been caught flat-footed, taking action only after its content - including a 14-year-old spouting Islamophobia, violent images spliced into children's videos, and white-supremacist and neo-Nazi videos - has been the subject of damning investigations done by media companies a fraction of its size.

That, too, was the case with Maza - the company only responded after he had called it out in a widely shared tweet. And it had only taken action against Crowder after the results of its first review drew such harsh criticism.

Maza told The Washington Post that his company, Vox, first reached out to YouTube last year after he was doxed - someone gave out his cellphone number, a common tactic of online harassers, ahd he was flooded with text messages urging him to debate Crowder - but that the company had ndone nothing in response.

Maza then began to report the videos to YouTube but said he did not receive a response.

"You're just screaming into the ether," he said.

So last week, he said, "something snapped" and he decided to publicly call out the company, despite the unwanted attention it would bring.

"It's my worst nightmare," he said. "Since this has happened I have caught myself being much more aware and self-critical about how I come across on camera."

YouTube spokeswoman Andrea Faville said Crowder has not ever instructed his followers to harass Maza.

The company also announced what it called a pre-planned update to its service on Wednesday, saying it would take more actions against people who spread misinformation and hate speech. The new policies ban videos that say "a group is superior in order to justify discrimination, segregation, or exclusion," and they include others that "glorify Nazi ideology," the company said.

Maza said the company's embrace of LGBT issues - it changed its logo to rainbow colors amid LGBT Pride Month, and routinely spotlights the work that LGBT creators do on the platform - was hypocritical.

"It's dehumanizing, and it's something I thought YouTube would be more protective about because it brands itself as being a queer space," he said. "But you can't have that space if those people have to worry about being humiliated in front of millions of people every time they want to be themselves."

(Except for the headline, this story has not been edited by NDTV staff and is published from a syndicated feed.)
Comments
Carlos MazaYouTube