Yellow Vest Protests: Paris was on lockdown with major monuments and department stores shut and some 8,000 police on the streets following the worst rioting in the capital in decades last weekend. 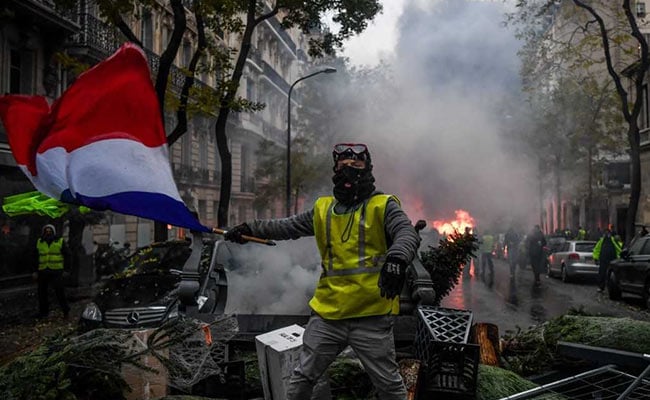 8,000 police on the streets following the worst rioting in Paris in decades last weekend (File)

"At the national level, including Paris, we're at more than 700 detained with participation in the movement at 31,000 nationwide including 8,000 in Paris," he told France 2 television.

Earlier in the day, police fired tear gas and arrested hundreds of people in Paris on Saturday as the French capital went on lockdown for the latest "yellow vest" protests against President Emmanuel Macron.

Shouts of "Macron, resign" mingled with the tear gas near the famous Champs-Elysees avenue, the scene last Saturday of the worst rioting in Paris for decades.

A forklift truck driver who gave his name as Denis said he was planning, like others, to march on Macron's presidential palace in anger against a leader who they say only looks out for the rich.

"I'm here for my son," said the 30-year-old, who had travelled down to Paris from the Normandy port of Caen. "I can't let him live in a country where the poor are exploited." 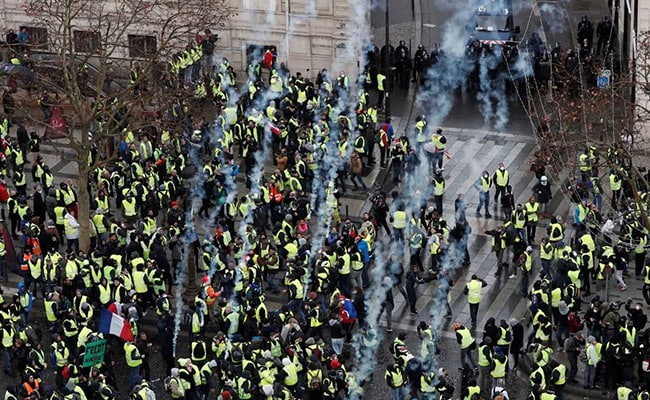 Dozens arrested for carrying masks, hammers, slingshots and rocks that could be used to attack police.

The protests began on November 17 with road blockades against rising fuel prices but have since ballooned into a mass movement against Macron's policies and top-down style of governing.

Coordinated "yellow vest" protests were taking place across the country on Saturday, including on numerous motorways, causing havoc on the national road network.

Prime Minister Edouard Philippe said 481 people had been detained in Paris as police carried out checks on people arriving at train stations and at protest hotspots such as the Champs-Elysees and Bastille monument.

Among them were dozens arrested for carrying masks, hammers, slingshots and rocks that could be used to attack police.

Shops, museums, the Eiffel Tower and many metro stations were closed, while top-flight football matches and concerts have been cancelled.

Last weekend's violence, which saw some 200 cars torched and the Arc de Triomphe vandalised, shook France and plunged Macron's government into its deepest crisis so far.

"These past three weeks have produced a monster that its creators no longer control," Interior Minister Castaner said on Friday, vowing "zero tolerance" towards those aiming to wreak further destruction.

Philippe on Friday evening met a delegation of self-described "moderate" yellow vests who urged people not to join the protests.

A spokesman from the movement, Christophe Chalencon, said Philippe had "listened to us and promised to take our demands to the president".

"Now we await Mr Macron. I hope he will speak to the people of France as a father, with love and respect and that he will take strong decisions," he said.

Philippe said some 89,000 police were being mobilised for protests nationwide, including 8,000 police in Paris, where a dozen armoured vehicles were being deployed for the first time in decades. 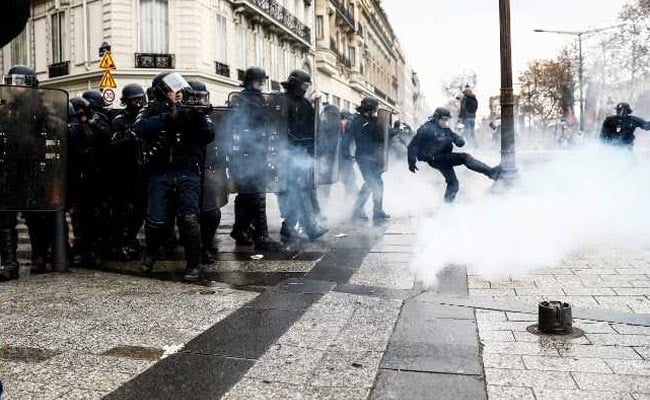 Shops, museums, the Eiffel Tower and many metro stations were closed, while top-flight football matches and concerts have been cancelled

Department stores were also closed due to the risk of looting on what would normally be a busy shopping weekend in the run-up to Christmas.

Foreign governments are watching developments closely in one of the world's most visited cities.

The US embassy issued a warning to Americans in Paris to "keep a low profile and avoid crowds", while Belgium, Portugal and the Czech Republic advised citizens to postpone any planned visits.

In a warning of impending violence, an MP for Macron's party, Benoit Potterie, received a bullet in the post on Friday with the words: "Next time it will be between your eyes."

Macron this week gave in to some of the protesters' demands for measures to help the poor and struggling middle classes, including scrapping a planned increase in fuel taxes and freezing electricity and gas prices in 2019.

But the "yellow vests", some of whom who have become increasingly radicalised, are holding out for more.

Protests at dozens of schools over university reforms, and a call by farmers for demonstrations next week, have added to a sense of general revolt.

The hardline CGT union, hoping to capitalise on the movement, has called for rail and metro strikes next Friday to demand immediate wage and pension increases. 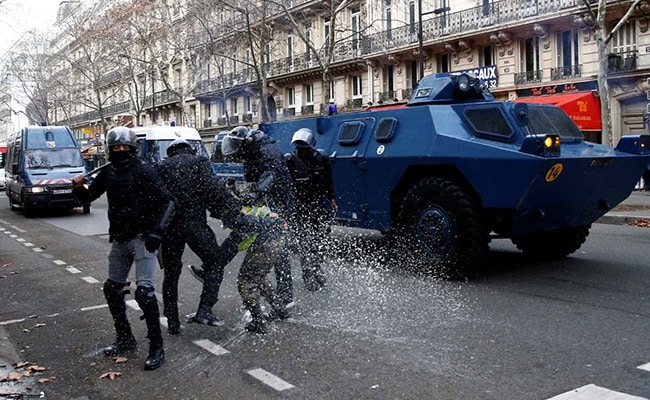 'President Of The Rich'

Macron's decision early in his presidency to slash taxes on France's wealthiest is particularly unpopular with the protesters.

Arguing that such a move was necessary in order to boost investment and create jobs, the former investment banker has so far ruled out re-imposing the "fortune tax".

But the policy, along with hikes on pensioners' taxes, cuts in housing allowances and a string of comments deemed insensitive to ordinary workers, has led critics to label him a "president of the rich".

Macron had previously vowed to stay the course in his bid to shake up the French economy and not be swayed by mass protests that have forced previous presidents to back down.

The climbdown on higher fuel taxes -- which were intended to help France transition to a greener economy -- marked a major departure for the centrist president.

(Except for the headline, this story has not been edited by NDTV staff and is published from a syndicated feed.)
Comments
ParisYellow Vest ProtestsParis Protests