Protests continued, with petrol depots, service stations, and shopping centres among the targets of the "yellow vests" -- so named for the high-visibility road safety jackets they wear. 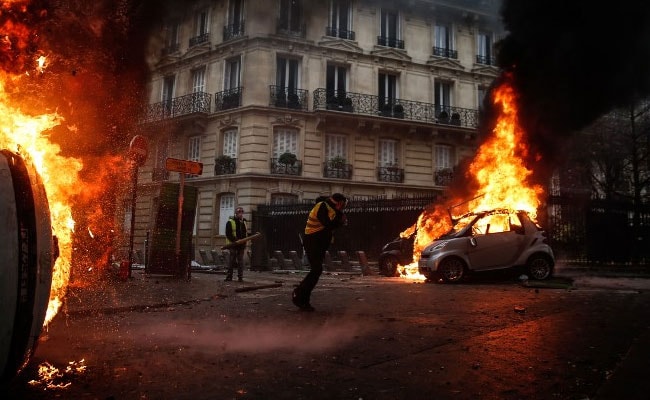 Protesters walk by burning cars during clashes with riot police on the sideline of a protest. (AFP)

The French government, under pressure from weeks of "yellow vest" protests over rising living costs, on Wednesday scrapped all planned fuel tax hikes for 2019 and appealed for calm.

An increase scheduled for January 1, was "scrapped for the year 2019" in its entirety, Environment Minister Francois de Rugy announced on BFM TV, in an about-turn for the government.

The presidency, meanwhile, warned of possible violence during a new round of protests planned for Saturday in Paris and elsewhere in the country.

"We have reasons to fear major violence," a source in the Elysee Palace told AFP amid calls for fresh mobilisation of the "yellow vests" movement already linked to four deaths and hundreds of injuries in often violent demonstrations.

The protests began on November 17 to oppose rising fuel taxes, but have ballooned into a broad challenge to French President Emmanuel Macron's perceived pro-business agenda and complaints that he is out of touch with the struggles of ordinary people.

Demonstrators have blocked roads nationwide, playing havoc with traffic in the busy run-up to Christmas.

Macron and his government appealed for calm Wednesday, and signalled they were ready to make further concessions to avoid more violence. 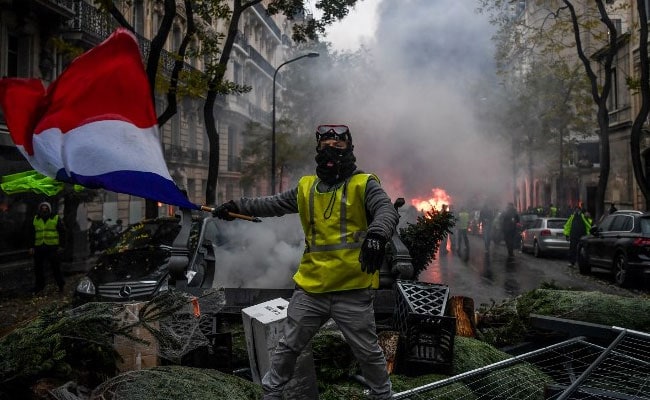 A demonstrator holds a French flag during a protest of Yellow vests. (AFP)

"The moment that we are living through is not about political opposition, it's about the republic," government spokesman Benjamin Griveaux said after a cabinet meeting where he said Macron urged decision-makers to issue "a clear and explicit call to calm."

Prime Minister Edouard Philippe told parliament: "What is at stake is the security of French people and our institutions. I'm calling for responsibility."

However far-right leader Marine Le Pen and hard-left firebrand Jean-Luc Melenchon have been vocal in backing the demonstrators' demands.

Tax cuts for the rich

Protests continued Wednesday, with petrol depots, service stations, and shopping centres among the targets of the "yellow vests" or "gilets jaunes" -- so named for the high-visibility road safety jackets they wear.

Macron, whose approval ratings are down to just 23 percent, is yet to comment publicly since returning to France from a G20 summit in Argentina on Sunday morning.

But his office said he told ministers he would stick to his decision to cut a "fortune tax" on high-earners -- a move which has infuriated many protesters.

The one-year moratorium on fuel tax rises was announced the day after Philippe, in the first major retreat of Macron's presidency, said the January 1 fuel tax rise would be postponed for six months.

On Wednesday, De Rugy said the period was extended to assuage fears that the unpopular increase would simply be reintroduced once the protests stop.

In a battery of announcements targeting low-income families, Philippe also froze increases in regulated electricity and gas prices, and new vehicle norms that would have hit users of old, polluting diesel cars.

Macron had made cutting wealth taxes a key campaign pledge ahead of his election in May 2017, arguing such levies discourage investment and drive away entrepreneurs

But the policy, along with comments deemed insensitive to the working class, has prompted many of the ex-banker's critics to label him a "president of the rich".

The "yellow vests" are largely made up of modest earners from rural and small-town France.

Experts say the government may have reacted too late to the street protests -- a regular feature of French political life which have repeatedly forced previous presidents into U-turns.

"When you leave things to fester too long, it costs more," Jean-Francois Amadieu, a sociologist at Paris 1 University, told AFP.

Nine government ministers were deployed to television and radio studios Wednesday to explain the administration's stance. 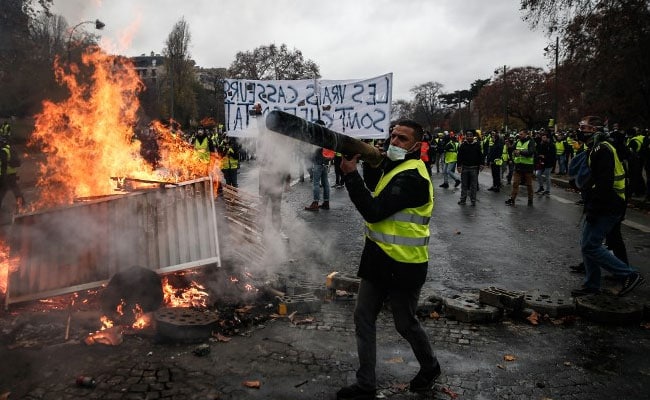 Protesters build a barricade during a protest of Yellow vests against rising oil prices and living cost. (AFP)

Labour Minister Muriel Penicaud warned against creating "chaos" which would "do nothing to resolve the problems" of workers.

Some 72 percent of French people support the "yellow vests" movement -- a figure which has remained stable despite last weekend's violence and the government's climbdown.

In the wake of calls for a large mobilisation on Saturday, Interior Minister Christophe Castaner urged "responsible" protesters not to descend on Paris.

He has nonetheless called in police reinforcements, fearing more violence.

Adding to the image of a country in revolt, the main French farmers' union said Wednesday its members would hold demonstrations every day next week.

Fuel shortages due to blockades remain a problem in areas of Brittany, Normandy, and southeast regions of France.