US Returns Stolen Copy Of Christopher Columbus Letter To Spain

The repatriation of Christopher Columbus' letter follows seven years of sleuthing by US law enforcement agencies after the discovery that it had been replaced by a forgery at the National Library of Catalonia in Barcelona. 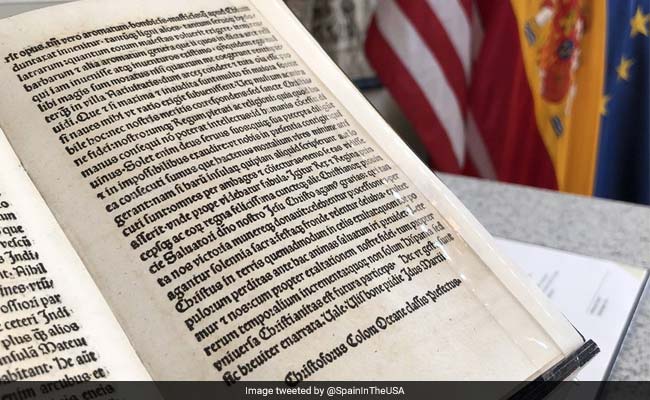 The letter was copied centuries ago from the one Columbus wrote to King and Queen of Spain.

A 500-year-old copy of a letter in which Christopher Columbus describes his voyage to the Americas has been returned to Spain after US authorities tracked down the document, which had been stolen and replaced with a forgery years ago.

The letter, copied centuries ago from the one Columbus wrote to King Ferdinand and Queen Isabella of Spain after his first Atlantic crossing, was given to Spain's Ambassador Pedro Morenes in Washington, law enforcement authorities said on Thursday.

The repatriation of the letter follows seven years of sleuthing by US law enforcement agencies after the discovery that it had been replaced by a forgery at the National Library of Catalonia in Barcelona.

"We are truly honoured to return this historically important document back to Spain - its rightful owner," US Attorney for Delaware David Weiss said in a statement.

Columbus, born in Genoa in modern-day Italy, had written the letter in Spanish after his return to Europe in 1493. Ferdinand and Isabella, who sponsored his voyage, sent the document to Rome to be translated into Latin and manually copied, Assistant US Attorney Jamie McCall said. 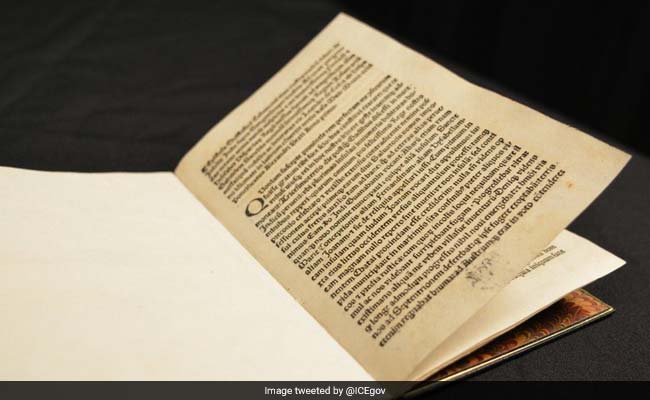 The letter was given to Spain's Ambassador Pedro Morenes in Washington.

"A number of these copies were made and then delivered to various kings and queens in Europe to spread the news of Columbus's discoveries," McCall said by telephone.

A Latin copy of the letter, in which Columbus describes the mountains, fertile fields, gold and indigenous people he encountered in the Caribbean, is the one that was illegally swapped for a forgery at the Barcelona library, McCall said.

Authorities said they discovered the theft after a tip in 2011 to an assistant US attorney in Delaware who had become experienced in the subject.

Because the library had digitised its collection before the theft, US investigators said they and Spanish authorities were able to determine in 2012 that the letter it had was a forgery. The real letter, they said, had been sold in November 2005 by two Italian book dealers for 600,000 euros.

After learning in March 2013 that it had been sold again in 2011 for 900,000 euros, authorities said they made contact with the person who had the letter. They said that person was unaware that it had been stolen.

They said they later concluded "beyond all doubt" that it was the letter taken from the Barcelona library and got it back.

Promoted
Listen to the latest songs, only on JioSaavn.com
The case is still under investigation, McCall said.
© Thomson Reuters 2018