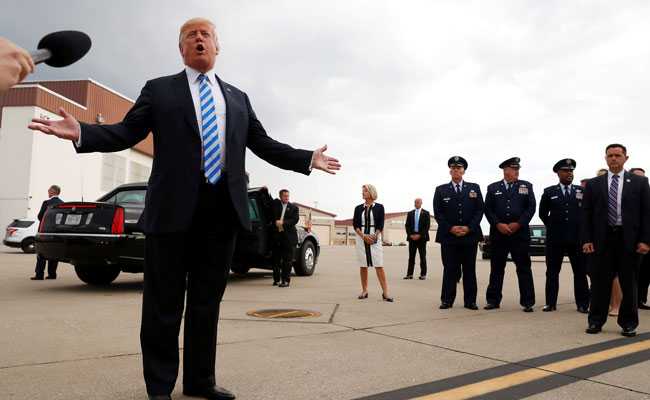 The US official who oversees the federal investigation into Russia's role in the 2016 U.S. election suggested secretly recording President Donald Trump last year and recruiting Cabinet members to invoke a constitutional amendment to remove him from the White House, the New York Times reported on Friday.

Deputy Attorney General Rod Rosenstein made the suggestions in the spring of 2017 after Trump fired FBI Director James Comey, the newspaper said, citing its sources as people who were briefed on the events themselves or on memos written by FBI officials including Andrew McCabe, who became acting director when Comey was dismissed.

The proposals did not come to fruition, the Times said. The Washington Post also reported the discussions, citing memos written by McCabe.

McCabe has no knowledge of how the memos were made available, said his lawyer Michael Bromwich.

The White House did not immediately react to the reports, and Trump did not respond to shouted questions from reporters about whether he would fire Rosenstein as he arrived in Springfield, Missouri, for a rally.

Later he alluded to his quarrels with personnel at the Justice Department, telling a packed rally for Republican U.S. Senate candidate Josh Hawley, "Just look at what is being exposed in our Justice Department."

"We have great people in the Department of Justice. ... But you've got some real bad ones. You've seen what's happened at the FBI. They're all gone," he said. "But there's a lingering stench and we're going to get rid of that, too."

A Justice Department spokeswoman provided a statement from a person who would not be identified and was present when Rosenstein proposed wearing a wire to record Trump, the Times said. The person said Rosenstein made the remark sarcastically.

Rosenstein initiated discussions about the U.S. Constitution's 25th Amendment, the Times and Post reported. The amendment deals with presidential succession and disability and outlines how the Cabinet can decide whether a president can no longer do his job.

The Times said Rosenstein told Justice Department and FBI officials the secret recordings could be used to expose the chaos of the administration after revelations that Trump asked Comey to pledge loyalty to him and also divulged classified information to Russians in the Oval Office.

Rosenstein has been a frequent punching bag for Trump supporters for appointing Special Counsel Robert Mueller in May 2017 to take over a federal probe of suspected Russian meddling in the U.S. election and potential coordination between Moscow and the Trump campaign.

The FBI's Comey led the investigation until he was dismissed.

The president, who regularly characterizes the probe as a "witch hunt," has denied any collusion with Moscow, while Russia has denied interfering in the election.

Chuck Schumer, the top Democrat in the U.S. Senate, said in a statement the newspaper report should not be used as a pretext to fire Rosenstein to install "an official who will allow the president to interfere with the special counsel's investigation."

After Rosenstein wrote a memo critical of Comey's handling of Democratic presidential candidate Hillary Clinton's email investigation, Trump used it as a basis for firing Comey. Rosenstein had told people he was caught off guard and felt he had been used, according to the Times.

Rosenstein told McCabe, who was also later fired by Trump, that he might be able to persuade Attorney General Jeff Sessions and John Kelly, the former homeland security secretary and current White House chief of staff, to invoke the 25th Amendment, the Times said. Sessions in March 2017 recused himself from the Russia matter, citing his service on the Trump campaign.

Donald TrumpRussia Role In US Election