US Man Charged With Painting Swastikas On Cemetery Headstones

Some 200 graves were defaced with swastikas drawn with black spray paint between Friday night and early Saturday morning at the Sunset Hills Cemetery. 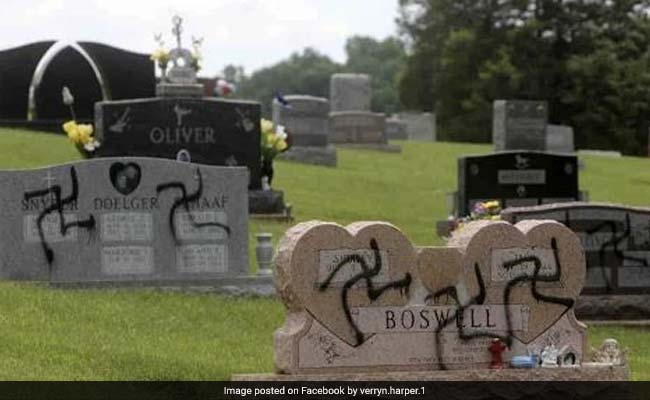 Chicago, United States: A man in the US state of Illinois was charged Tuesday with hate crimes and other criminal offenses after swastikas were found spray-painted on hundreds of headstones in a cemetery.

Some 200 graves were defaced with swastikas drawn with black spray paint between Friday night and early Saturday morning at the Sunset Hills Cemetery in Glen Carbon, a small community near the city of St Louis.

The vandalism occurred as the country was entering the Memorial Day holiday weekend, which commemorates fallen American veterans. About 1,300 veterans are buried at the nondenominational cemetery.

McLean was charged with a host of criminal offenses, including four hate crimes charges for the cemetery vandalism and additional vandalism on homes in a nearby community, police said.

No motive was given for his actions.

"We haven't seen anything of this magnitude in the 30 years that I've been here," cemetery groundskeeper Mark Johnson told local TV station KMOV.

Volunteers and cleanup crews restored the cemetery prior to a Memorial Day ceremony Monday, and planted American flags to honor the service members buried there.

(This story has not been edited by NDTV staff and is auto-generated from a syndicated feed.)
Comments
swastikaswastika on headstoneswastika on cemetery headstone