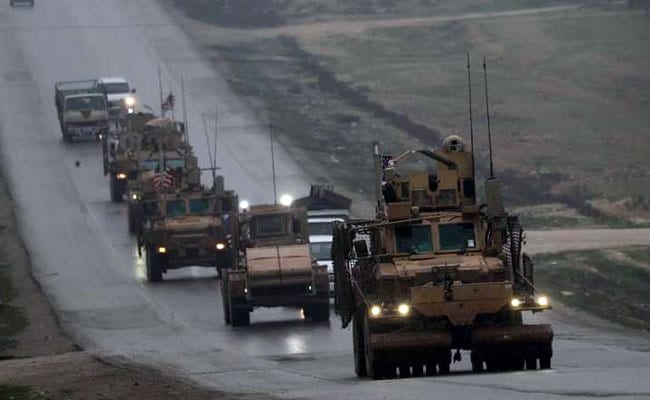 A convoy of US military vehicles rides in Syria's northern city of Manbij. (AFP)

The US-led coalition in Syria has begun withdrawing its troops, a spokesman said Friday, less than a month after US President Donald Trump made his shock announcement.

The force which has battled the ISIS group since 2014 started scaling down but it remained unclear how long the drawdown process would last.

"CJTF-OIR has begun the process of our deliberate withdrawal from Syria," spokesman Colonel Sean Ryan told AFP in a statement, referring to the US-led anti-ISIS force.

"Out of concern for operational security, we will not discuss specific timelines, locations or troops movements," he said.

The Syrian Observatory for Human Rights reported that the coalition had started scaling down its presence at Rmeilan airfield in the Hasakeh province in northeastern Syria.

"On Thursday, some American forces withdrew from the Rmeilan military base," Rami Abdel Rahman, the head of the Britain-based monitoring organisation, said.

"This is the first such pullout of American forces since the US president's announcement" of a military withdrawal from Syria last month, he said.

The US-led coalition has several other bases across northeastern Syria, as well as in neighbouring Iraq, where Trump has said his forces would remain.

A US defence official in Washington had earlier confirmed to AFP that equipment was being removed from Syria.

The US-led coalition, which also includes countries such as France and Britain, was formed in mid-2014 to counter the expansion of the ISIS group after it proclaimed its self-styled "caliphate".

Trump claimed last month that the ISIS had been defeated and that US troops could therefore come home.

Fighter jets and special forces have played a key role in efforts to claw back the territory lost to ISIS.

A Kurdish-led group, the Syrian Democratic Forces, is currently flushing out the very last pockets of land controlled by the ISIS in the Euphrates River Valley.

The beginning of the drawdown coincided with a visit to the Middle East by US Secretary of State Mike Pompeo, who insisted in Cairo Thursday that the withdrawal would go ahead despite widespread criticism.

Earlier this week, US National Security Advisor John Bolton laid out conditions for the pullout, including the defeat of the ISIS in Syria and guarantees for the safety of Washington's Kurdish allies in the campaign, who have been threatened with an imminent offensive by Turkey.

Bolton's comments were widely seen as backtracking on Trump's announcement, including by Turkey which described them as "unacceptable".

The battle against die-hard ISIS in remote areas along the Iraqi-Syrian border and the hunt for ISIS supremo Abu Bakr al-Baghdadi, the world's most wanted man, could last indefinitely however.

And the Kurdish militia which has spearheaded the ground battle against the ISIS group is left exposed to a Turkish offensive by the US withdrawal.

The People's Protection Units (YPG), a Syrian offshoot of the PKK group which has waged an insurgency against the Turkish state since 1984, has already started cosying up to Damascus and its Russian sponsor.

Turkey considers the YPG a terrorist announcement and has repeatedly threatened to move into Syria to create a buffer zone along the border.

Critics of Trump's decision, including within his own Republican camp, have said that a precipitous withdrawal would shatter US policy in Syria and allow ISIS to rebuild.

They have also argued that it would further allow Damascus ally Iran to extend its influence across Syria and potentially threaten Israel.

Since his surprise announcement last month, Trump has stressed any withdrawal would be coordinated, gradual and "prudent".

But observers have stressed that the announcement of the withdrawal was having the same impact in reshuffling the cards of the conflict as the withdrawal itself.

"The damage is done. On the ground, the announcement of the pullout is as if they were already gone," said Fabrice Balanche, a geographer and Syria expert.

(Except for the headline, this story has not been edited by NDTV staff and is published from a syndicated feed.)
Comments
ISISUS led coalitionSyria