"Go Back To Mexico, Rapists," She Ranted At Him. She Was Being Filmed

It's very likely that his mother had blown some pine needles into the next-door yard, Guzman said. That can happen on big jobs like this one - where her clients wanted the entire property spick-and-span so they could rent it on Airbnb. But the lady wasn't screaming about pine needles. 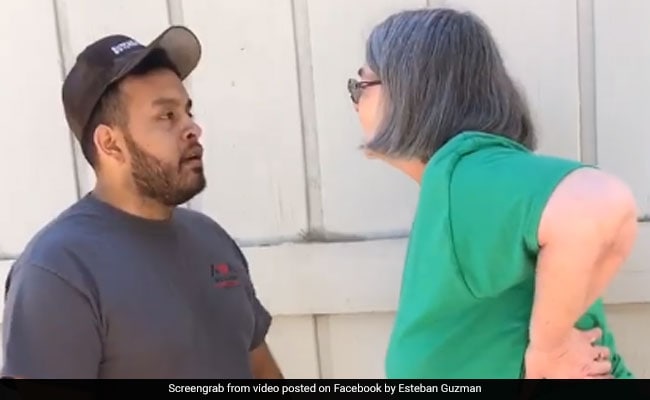 As Esteban Guzman recalled it, his mother had just finished cleaning the inside of a client's house and strapped on a leaf blower when the woman across the street started screaming.

It's very likely that his mother had blown some pine needles into the next-door yard, Guzman told The Washington Post. That can happen on big jobs like this one - where her clients wanted the entire property spick-and-span so they could rent it on Airbnb.

But the lady wasn't screaming about pine needles.

In fact, Guzman said, she didn't even live next door.

Guzman stopped loading pine needles into the family dump truck and listened to the woman's ranting over the drone of his mother's leaf blower.

He considered his options.

It had been a long week already, he said, but then, all his weeks were long. Guzman worked five weekdays as a systems administrator outside Los Angeles, he said, then commuted every weekend to Lake Arrowhead to help with the family cleaning, landscaping and construction business around the mountainous area.

The pair had hours still to go on this particular job Saturday morning in nearby Running Springs, and streetside racism was nothing Guzman hadn't put up with before. Arguing with the woman would risk a scene and make the day even longer.

But the thing was, Guzman said: "Nobody yells at my mom like that."

His mother actually is from Mexico, he said. She is still a Mexican citizen, 27 years after giving birth to him in southern California.

He declined to give her name but said she had spent the past three decades in the United States, raising him and his brother as a single parent, cleaning other people's properties so that he could go to college - California State Polytechnic University at Pomona, class of 2017, he said.

And now, in 2018, a woman Guzman had never seen before was telling his mother to go back to Mexico - over the issue of pine needles.

"A lot of things were going through my head," he recalled. "Don't hit this lady. Use your words."

At the back of his mind were stories he had read about President Donald Trump's "zero tolerance" immigrant policies.

"People undocumented are stopped and deported immediately," Guzman said. "I didn't want my mom to be one of those cases."

So he walked across the yard, he said, and told the woman that he was a U.S. citizen, and asked her what her problem was.

He used his words.

But by the time Guzman's mother hit record on her phone, the other woman was using her middle finger.

She held it about two inches from Guzman's face, her other hand on her hip. Guzman stared straight at her from beneath the brim of his hat.

The woman took a step back. "Because you're Mexican," she said.

"Because we're Mexicans?" he asked.

The words triggered instantly in Guzman's memory. "She's quoting the president right now!" he said he thought to himself.

And in fact, Trump had used the same words in some of his most infamous speeches - declaring that Mexico sends rapists, that "animals" sneak across the U.S. border.

"How many people have I raped?" Guzman asked the woman, tapping his T-shirt.

"Drug dealers," she continued, in another echo of Trump.

"How many drugs have I dealt?" he asked. But he never got a logical answer.

"Even the president of the United States says you're a rapist," the woman said.

Guzman's mother lowered the camera for a moment to turn off the leaf blower. When she raised it again, her son was asking: "Do you believe everything you see on the news? Can't you tell we're working hard right here?"

At that, the woman seemed to remember her initial injury. "I see what you're doing," she told Guzman. "You're also blowing it in everybody's yard."

In Spanish, Guzman's mother tried to intercede. "Tell her that we're finished," she said, as if the leaf blower's silence might end the ugliness.

Instead, the woman who had been yelling snapped her head toward the camera and said something in mock Spanish, something like "blub, blub, blub."

And then she brought a finger back out, this time waggling it in Guzman's face.

That was enough. Guzman's mother turned the camera off. He recounted the rest of the incident to The Post.

"She wanted me to pick up more pine needles on that side," Guzman said. "She doesn't even live there!"

Still, he said, he tried to make peace. "I told her if we made a mistake, we can fix it. If we wronged you in any way, we're more than glad to apologize. . . . But there's no need for you to say racist things. We're civilized people."

With that, Guzman said, the woman whose name he never learned walked back across the street and let them finish the day's work, for which he and his mother would earn about $650 between them.

Their clients had been inside during the encounter, he said, and hadn't even noticed.

When he and his mother got back to Lake Arrowhead that afternoon, Guzman said, they talked about the video.

"She said, 'This isn't right,' " Guzman recalled. "Everyone needs to see the racist people."

So he put it up on Facebook, and now a small fraction of everyone has seen it.

The video spread from Guzman's page to liberal activist sites, then a 17-year-old's Twitter feed, where it was viewed more than 5 million times. By the time it reached the Root, the unnamed woman had been dubbed "Darth Becky."

By Monday evening, Guzman had changed out of his yard clothes into a dress shirt and tie and told his family story to CNN.

He said he had given at least half a dozen interviews by the time he spoke to The Post on Tuesday morning - which he did from his car, on the way to his office job and another long day.

The Washington Post's Azhar AlFadl Miranda and Antonio Olivo contributed to this report.