United Airlines gave away a 2-year-old's seat after making a mistake while processing his boarding pass. 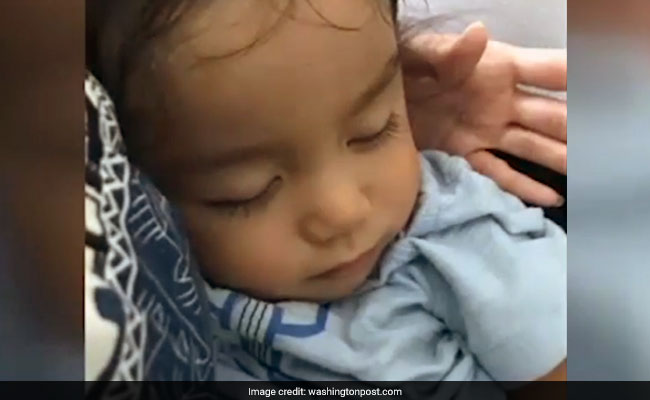 United Airlines has apologized to a passenger who was forced to give up her 2-year-old son's seat and hold the child on a flight - until her leg and arm went numb.

Shirley Yamauchi, a middle school teacher from Hawaii, was bound for a teacher's conference in Boston last week, she told Hawaii News Now. Her traveling companion was 27-month-old Taizo, whose ticket she said cost as much as hers - nearly $1,000.

So did the layover.

But as Yamauchi and her son sat waiting for takeoff to Boston, a man walked up with the same seat number as Taizo, the mother told ABC affiliate KITV.

"I told him, I bought both of these seats," she told the station. "The flight attendant came by, shrugs and says, 'flight's full.'"

A United spokesman told The Washington Post that Taizo's boarding pass had been improperly scanned and that because the toddler wasn't logged in to the system, his seat was released to a standby passenger.

The airline said it is trying to compensate the family for its mistake.

But at the time, Yamauchi said, she had only bad options.

"I was told if we refund you anything right now, we're going to have to cancel the rest of your flight arrangements to Hawaii," she told KITV.

She told Hawaii News Now that she considered protesting, but was scared to make a scene. "I started remembering all those incidents with United on the news. The violence. Teeth being knocked out," she said.

In April, a passenger named David Dao refused to give up his seat on a United flight. He was dragged, battered and bloody, down the plane aisle by police - an incident that scandalized the airline for weeks, until it settled the passenger's lawsuit.

Dao's experience was among the worst in a long string of passenger horror stories on multiple airlines.

In the last few months alone, a pilot's rant before takeoff caused her passengers to flee the plane; a man in a wheelchair was forced to crawl up a staircase using his hands; and a beloved giant rabbit apparently died in midair.

"I didn't want those things to happen to me," Yamauchi told Hawaii News Now, referring to Dao's dragging.

So the man with a standby ticket sat down in Taizo's seat, and the child crammed in with his mom.

That was against the safety advice of the Federal Aviation Administration, which strongly urges a separate seat for children; but Yamauchi said she had no better options.

"He's 25 pounds; he's half my height," she told Hawaii News Now. She sent the station pictures of her son wedged in various positions on her lap, a container of milk balanced on the arm rest above him, somehow managing to sleep.

Meanwhile, Yamauchi said, her arm was smashed between the plane wall and her son for most of the three-and-a-half hour flight to Boston.

"At the every end, he was standing up between my knees," she told KITV.

A United spokesman told The Post that the airline would compensate Yamauchi "as a goodwill gesture" and will work with employees to avoid a repeat of the mistake.

"We deeply apologize to Ms. Yamauchi and her son for this experience," the spokesman wrote in a statement, although he did not answer questions about why the child was allowed to fly without a seat, and whether it was safe.

(Except for the headline, this story has not been edited by NDTV staff and is published from a syndicated feed.)
Comments
United AirlinesToddler seat given away