Haiti's recent surge in kidnappings throws into sharp relief the increased domination of gangs over the country, something law enforcement agencies are unable to contain. 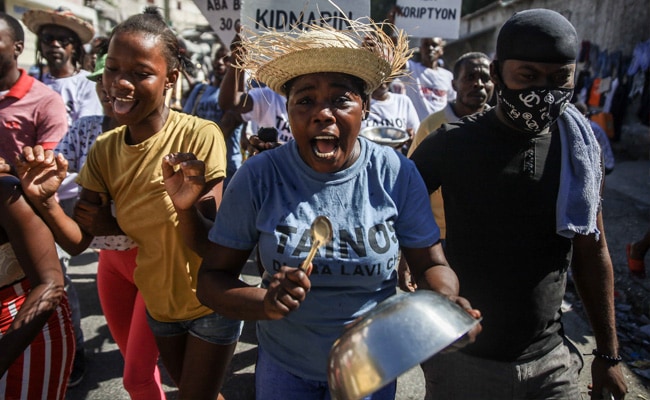 Two of the 17 North Americans who were kidnapped by a Haitian gang in mid-October have been freed, the church that they were affiliated with said Sunday, reporting that they were "in good spirits."

"Only limited information can be provided, but we are able to report that the two hostages who were released are safe, in good spirits, and being cared for," said US-based Christian Aid Ministries in a statement on its website.

The missionaries and family members -- a group of 16 Americans and one Canadian -- were abducted October 16 while returning from an orphanage in an area east of the capital Port-au-Prince controlled by one of Haiti's most powerful crime gangs.

Christian Aid Ministries, which is based in the state of Ohio, has said the hostages are 12 adults aged 18 to 48, and five children ranging in age from eight months to 15 years.

"We cannot provide or confirm the names of those released, the reasons for their release, where they are from, or their current location," the church said, asking those with knowledge of the details to keep the sensitive information private.

"While we rejoice at this release, our hearts are with the fifteen people who are still being held," it added.

The gang "400 Mawozo" was behind the kidnapping and had demanded a ransom of one million dollars per head, sources had told AFP. No details on the matter were provided by the church on Sunday.

FBI agents, Haitian authorities and the anti-kidnapping unit of the national police have been negotiating for more than a month with the kidnappers.

Since December 2020, Haitian police have sought the gang's leader, Wilson Joseph, for crimes including assassination, kidnapping, vehicle theft and hijacking of cargo trucks.

Haiti's recent surge in kidnappings throws into sharp relief the increased domination of gangs over the country, something law enforcement agencies are unable to contain.

Gangs have seized effective control of much of Port-au-Prince which has been under an intensifying political crisis, particularly with the assassination of President Jovenel Moise in July.

The United States has advised Americans not to travel to Haiti, in particular due to kidnappings they say regularly target American citizens.

Last week, both the United States and Canada additionally recommended that their nationals living in the country leave.

More than 800 people have been kidnapped for ransom since January in Haiti, according to the Center for Analysis and Research in Human Rights (CARDH).

In April, 10 people including two French clerics were kidnapped and held for 20 days by 400 Mawozo in the same region.