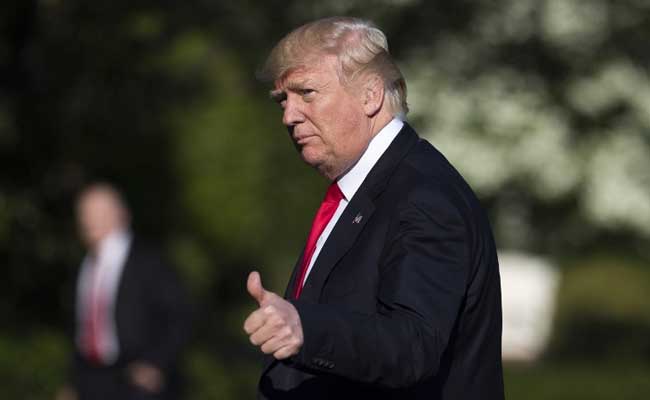 Trump wants to unite Islam, Judaism and Christianity, will visit Saudi Arabia, Israel and the Vatican

Washington: President Donald Trump, on his first trip abroad, will travel later this month to Saudi Arabia, Israel and the Vatican in an effort to unite Islam, Judaism and Christianity in the common cause of fighting "intolerance" and radical extremism, White House officials said Thursday.

The nine-day trip, during which officials said Trump will meet with Pope Francis, will end with previously announced meetings with NATO leaders in Brussels and the Group of Seven world economic powers in Sicily.

In a Rose Garden ceremony to sign an executive order easing tax rules against religious organizations' participation in politics, Trump said that "tolerance is the cornerstone of peace."

His trip, he said, "will begin with a truly historic gathering in Saudi Arabia with leaders from all across the Muslim world," where "we will begin to construct a new foundation of cooperation and support with our Muslim allies to combat extremism, terrorism and violence."

In an apparent reference to his willingness to deal with authoritarian governments without pressuring them on human rights, Trump said, "Our task is not to dictate to others how to live but to build a coalition of friends and partners who share the goal of fighting terrorism and bringing safety, opportunity and stability to the Middle East."

Trump is getting a later start going abroad than his most recent predecessors, who made earlier foreign trips. His decision to make the Middle East his first destination also represents a sharp break from recent tradition. Since Ronald Reagan visited Mexico during his transition and Canada as his first foreign stop in office, each successive president has chosen one of those two countries as the kickoff for international travel.

He has also committed to attending the Group of 20 summit in July in Hamburg - where the Kremlin has said Russian President Vladimir Putin expects to meet with him - and three security and economic summits in Vietnam and the Philippines in November. He has also suggested he will pay reciprocal visits to the United Kingdom and Japan, whose leaders visited the White House during Trump's first month in office.

Three senior administration officials who briefed reporters on the maiden trip, scheduled to begin May 19, said the administration has detected an eagerness among foreign leaders to follow the lead of the new administration, which they described as far more engaged with the world than its predecessor.

Another official described "a lot of excitement in terms of a desire to engage" with Trump. "People are very psyched to work with the president," this official said.

Critics have charged Trump with ignoring American values and traditional alliances and being too transactional in his dealings with other countries, with some foreign officials expressing frustration with his public comments and tweets. While some have described him as respectful and intent on listening during private interactions, others have said they were discouraged by his apparent lack of knowledge about issues under discussion.

The senior officials appeared acutely conscious of criticism of Trump as erratic and ill-schooled on foreign affairs but equally confident that his administration would ultimately reap rewards. Emphasizing that weeks of work by the White House, the National Security Council staff and other security agencies preceded Thursday's announcement, they described a strategy in which Trump sets long-range goals and objectives - such as Israeli-Palestinian peace, or the defeat of the Islamic State and global terrorism in general - finds willing partners to address them under U.S. leadership, and maintains flexibility on how to achieve them.

While he has said he believes the United States can help Israel and the Palestinians solve their problems, for instance, Trump has not said how he would approach that situation differently from the many administrations that have previously tried and failed.

"Whether he can or can't" achieve what others could not, "it's our job to try," one official said. "The president has created hopefully an environment where people want to solve problems, instead of saying this can't happen."

In the peace process and the fight against the Islamic State, Trump is depending heavily on Saudi Arabia - the country granted his first presidential visit. Often exasperated with what they saw as President Barack Obama's dithering on Syria and soft treatment of Iran, the Saudis have enthusiastically reached out to Trump, including a visit here by Deputy Crown Prince Mohammed bin Salman in March.

Trump "wants to restore the American role in the world . . . destroy terrorism . . . push back on Iran. And so do we," Saudi Foreign Minister Adel al-Jubeir said in a meeting with reporters Thursday in Washington. Trump's visit will be historic "by every measure," Jubeir said, noting that Saudi Arabia is the indispensable partner for Trump's regional goals, in addition to being a key U.S. investor and trading partner.

Jubeir said there will be three separate summits with Trump in Riyadh, the Saudi capital - with King Salman, with the Gulf Cooperation Council of Persian Gulf countries and with a broadened group including other Arab and Muslim countries that he declined to name. Administration officials said they foresaw a number of agreements to be announced after the meetings, where discussions are expected to include a new military coalition among friendly Sunni Muslim states.

But the Saudis' main shared interest with the administration is their joint antipathy toward Iran, Riyadh's main rival for regional influence. Jubeir noted that the administration has increased its support for Saudi Arabia's war against Iranian-backed Houthi rebels in Yemen and said it has agreed to resume shipments of precision-guided munitions to the kingdom, suspended by Obama because of concerns over widespread civilian casualties in the Saudi air campaign in Yemen.

In Israel, local media said that Trump wants to deliver his main speech at the ancient desert fortress of Masada. In addition to Israeli Prime Minister Benjamin Netanyahu and other officials, Trump also plans to meet again with Palestinian Authority President Mahmoud Abbas, who visited him Wednesday at the White House. That meeting may take place in Bethlehem on the West Bank, a short distance from Jerusalem.

In Rome, the meeting with Francis on May 24 follows barbs traded between the pontiff and Trump during the presidential campaign. Without naming Trump, Francis criticized restrictive immigration policies and said that plans to build a wall on the U.S.-Mexico border were "not Christian." Trump responded that it was "disgraceful" for a religious person to question someone's faith.

The second-to-last stop on the trip will be a day-long meeting with NATO leaders in Brussels. NATO's next summit is not scheduled until next year in Istanbul, but the May 25 meeting was specially scheduled to enable other NATO leaders to meet with Trump. The trip will end with Trump's return to Italy for the G7 summit on May 26 and 27.

Promoted
Listen to the latest songs, only on JioSaavn.com
(The Washington Post's David Nakamura contributed to this report)


(This story has not been edited by NDTV staff and is auto-generated from a syndicated feed.)
Comments
Donald TrumpDonald Trump First Overseas VisitTrump Israel VisitTrump Saudi Arabia VisitTrump Vatican Visit