'Too fat to fly' Frenchman lands in Britain 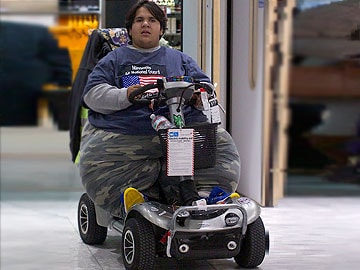 Kevin Chenais, who was deemed too fat to fly, exits Heathrow Airport upon arrival on a plane from New York to London

London: A young Frenchman who was stranded in the United States because he was deemed too heavy to fly finally took a plane to Britain on Monday, one step closer to going home.

Kevin Chenais, who has a hormone imbalance and weighs 230 kilograms (500 pounds), arrived at London's Heathrow airport with his parents early Monday after Virgin agreed to fly him back from New York.

Chenais, 22, had been in the United States since May 2012 for treatment. He tried to fly home with British Airways last month but the airline said he was too heavy.

The family subsequently tried to sail across the Atlantic, but the Queen Mary cruise ship also refused to have him onboard.

"The flight was really hard," he told AFP in French as he sat on a mobility scooter at the airport, wearing a t-shirt emblazoned with a large US flag.

"I didn't stop crying for the whole flight."

But he praised Virgin for flying him out from New York's JFK airport and paying for the economy-class flight.

"That was very kind of them," he said.

The family were met at Heathrow by French consular staff who are trying to arrange the final leg to France by Eurostar or Air France.

Chenais, who requires regular oxygen and round-the-clock care, expressed his anger at British Airways and the Queen Mary for refusing to take him home.

"We were all set to take the boat, then they turned us back without even seeing me, without even trying," he said.

"So I'm really angry -- doubly angry because British Airways refused to take me."

He told AFP he would like to stay in Britain for a while before heading home.

Kevin's father Rene said his son had been left feeling "empty" when British Airways refused to let him onboard.

The same airline had flown him to the US in the first place, he pointed out.

"They took him out there, but they wouldn't take him back," he said.

"This is a case of discrimination."

The journey was tiring for Kevin and the Virgin plane was not specially adapted for his needs, his father added.

Promoted
Listen to the latest songs, only on JioSaavn.com
"Kevin has always been kind of alone in life," he told AFP.