Tiffany Trump, 27, who is the only child of the president and his second wife Marla Maples, graduated from Georgetown University's law school last spring while Boulos, 23, is heir to a multibillion dollar Nigerian conglomerate. 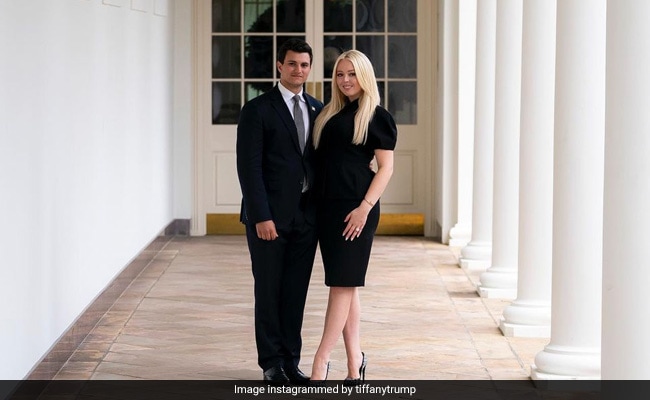 Tiffany Trump announced that she is engaged to boyfriend Michael Boulos.

Tiffany Trump, the youngest daughter of President Donald Trump, announced Tuesday - her father's last full day in the White House - that she is engaged to boyfriend Michael Boulos.

"It has been an honor to celebrate many milestones, historic occasions and create memories with my family here at the White House, none more special than my engagement to my amazing fiance; Michael! Feeling blessed and excited for the next chapter!" the first daughter posted on Instagram alongside an image of the couple standing in the White House colonnade.

Boulos shared the same photo to his own Instagram account, with the caption: "Got engaged to the love of my life! Looking forward to our next chapter together." He also commented on his fiancee's post, writing, "Love you honey."

Tiffany Trump, 27, who is the only child of the president and his second wife Marla Maples, graduated from Georgetown University's law school last spring while Boulos, 23, is heir to a multibillion dollar Nigerian conglomerate. After growing up in Lagos, he attended college in London, the city where the pair were first photographed together in January 2018.

Tiffany Trump and Boulos have flown under the radar in comparison to the president's older children whom he shares with ex-wife Ivana Trump: Don Jr., 43; Ivanka, 39; and Eric, 37. (Her youngest sibling, Barron, 14, is her father's only child with first lady Melania Trump.) But Boulos has been pictured at several Trump events over the last couple years, including the president's February State of the Union address last year. His own family has also spent Thanksgiving with hers at Mar-a-Largo.

Tiffany Trump reappeared in the political spotlight to campaign for her father's re-election over the summer, where she appealed to young voters in a speech at the Republican National Convention. She also headlined events in Michigan, Minnesota, Florida and North Carolina in the months leading up to the vote.

In October, Trump made headlines at a "Trump Pride" event in Tampa where she hit out at the media and the "fabricated lies" surrounding her father's presidency. Early in her speech, Trump said that "prior to politics, he supported gays, lesbians, the L-G-B-Q-I-I-A-plus community," fumbling the letters for groups covered under the widely accepted initi-alism. Her comments, which included a claim that President Trump will find a cure for AIDS in the next 10 years, sparked ridicule on social media. LGBTQ organization GLAAD also responded by tweeting a reminder about their Trump Accountability Project, which "catalogues the anti-LGBTQ statements and actions" - of which they documented more than 150 - by his administration.