Two knives were left on the school desk of 12-year-old Prince Hisahito, the only young male heir to the throne. 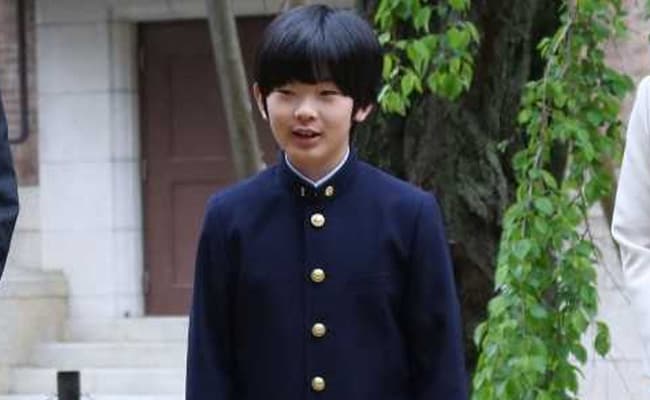 Before Prince Hisahito's birth, Japan's royal family had no male heirs at all. (AFP Photo)

Two kitchen knives have been found on the school desk of a young Japanese prince who one day stands to inherit the Chrysanthemum Throne, heightening security fears and underlining the vulnerability of a royal family short on male heirs.

The knives, whose blades had been painted pink, were bound to a two-foot-long bar that straddled the school desk of 12-year-old Prince Hisahito and a neighboring desk on Friday.

Hisahito is the only young male heir to the throne, and the incident came just days before his uncle, Crown Prince Naruhito, stands to become Japan's new emperor.

Surveillance video from the school showed a man in a blue workman's uniform, wearing a helmet and a pair of gloves, entering the school shortly before the knives were found at noon on Friday. A man with a similar description was also spotted by cameras at the nearest subway station in Tokyo's Bunkyo ward.

NHK, Japan's national broadcaster, said a man in his 50s was arrested Monday in the city of Hiratsuka southwest of Tokyo.

"It is not clear whether there is any ideological motive behind the incident," a police officer was quoted by the Sankei newspaper as saying. "Yet, it is eerie given what the suspect did to the knives."

On Wednesday, Naruhito will take over as emperor from his popular father Akihito, who is abdicating for health reasons under the weight of official duties.

Women cannot inherit the throne in Japan. Naruhito, 59, has a daughter but no son, leaving his 53-year-old younger brother Prince Akishino next in line, followed by his only son, Hisahito. There are no other male heirs.

"Prince Hisahito is someone who will become the emperor in the future. Moreover, there is just one heir among the younger generation," tweeted imperial expert Tsuneyasu Takeda.

"The future of Japan entirely rests upon his small shoulders," Takeda wrote. "Are the police and the school aware of that? This time, the incident did not go further than the knives being placed. Yet, had the culprit intended, he/she could have killed or wounded him. That makes me shudder with fear."

Local media reported that the school had received a mysterious call before the incident criticizing Hisahito's attendance there.

The young prince started at the middle school in Bunkyo only this month, and the culprit would have been able to identify where he sits because children have their names on their desks. Children were in a different classroom when the knives were placed, local media reported.

It is not unusual for workmen to enter schools to perform maintenance and construction work, but they are usually required to show identification at the entrance to the compound. Sankei reported that the suspicious man identified himself as being there for construction work, but it was not clear if his name was recorded by guards.

Before Hisahito's birth, Japan's royal family had no male heirs at all, forcing the government to consider a change in the law to allow women to inherit the throne. But after he was born, the pressure for change dissipated under staunch opposition from ultra-conservatives.

Still, a 2017 poll by Mainichi newspaper found that two-thirds of Japanese people favor changing the law, and the government has said it will reopen the debate after Naruhito ascends the throne.

The knife incident only underlines the vulnerability of the line of succession under the current system.

"The Imperial House is facing extinction," said Ken Ruoff, director of the Center for Japanese Studies at Portland State University. "The whole system is a ticking time bomb. Sooner or later they just won't have a boy, and they almost didn't this generation."