'This Is For Allah', London Attackers On Stabbing Spree Said: Eyewitnesses

Seven people have died in a terror incident that took place last night in the heart of London. 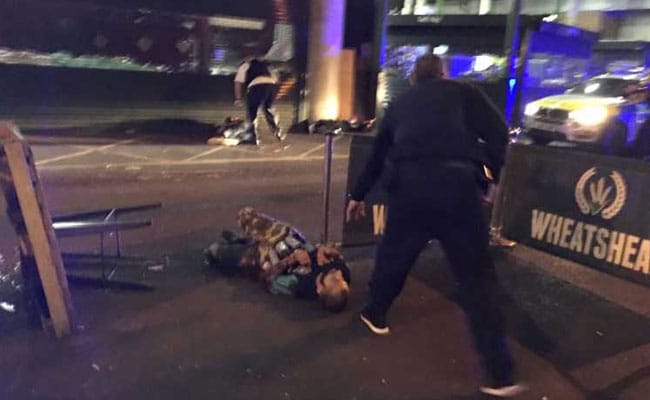 The assailants who mowed down people on London Bridge attacked people with knives. (AFP)

London: Three assailants smashed a van into pedestrians on London Bridge before attacking revellers in a popular nightlife hub with knives, leaving seven dead in the third deadly terror attack in Britain since March.

"It has now been confirmed sadly that seven members of the public have died," in addition to the three suspects, London police chief Cressida Dick said.

An Australian and four French nationals were among the 48 people rushed to hospital after the attack.

May's Conservatives and the main opposition Labour party suspended national campaign events for the day, joined by other parties, although local campaigning will continue.

Security was already a major feature of the campaign, after 22 people were killed in the Manchester concert bombing on May 22, claimed by the ISIS.

As they attacked revellers around London Bridge, the attackers wore what looked like suicide vests which turned out to be "hoaxes", police said earlier.

"They were stabbing everyone. They were running up and going 'This is for Allah'," a man called Gerard told the BBC, adding that he had seen the three assailants stabbing a girl as she cried for help.

Another witness called Eric told the BBC he had seen three men come out of a white van after hitting pedestrians and thought they were going to help.

Instead they "started kicking them, punching them and took out knives. It was a rampage really," he said, adding that he too heard a shout of: "This is for Allah".

The attack came only minutes after the end of the Champions League final between Real Madrid and Juventus, in an area teeming with bars where many fans were watching the football on television.

Britain was already on high alert following the attack on a concert by US pop star Ariana Grande in Manchester, northwest England.

The national threat level was briefly raised to its highest level, and troops deployed at key public sites.

May chaired an emergency cabinet meeting on Sunday morning. Overnight, she said: "Our thoughts are with those who caught up in these dreadful events."

London's Labour Mayor Sadiq Khan described the incident as "deliberate and cowardly", adding: "There is no justification whatsoever for such barbaric acts."

Asked if the election would still go ahead, he told the BBC: "One of the things the terrorists hate is democracy... I'm looking forward to voting on Thursday."

It is the latest in a string of attacks to hit Europe, including in Paris, Berlin and Saint Petersburg.

France said four of its citizens were injured in the attack, one seriously, and President Emmanuel Macron said his nation was "more than ever at Britain's side".

German Chancellor Angela Merkel said: "Today we are united across borders in horror and mourning, but also in determination."

US President Donald Trump offered his help, tweeting "WE ARE WITH YOU. GOD BLESS!" -- and highlighting his thwarted ban on travellers from six mainly Muslim countries.

Grande, who is due to headline a star-studded concert in Manchester late Sunday for the victims of the May 22 attack, tweeted: "Praying for London."

Australian Prime Minister Malcolm Turnbull, who confirmed one Australian was in hospital, said: "This attack is yet another cruel example of the new reality with which we live."

Witnesses described the van speeding into several pedestrians on London Bridge and then the knife-wielding men sprinting towards bars packed with revellers enjoying a Saturday night out.

Several people said they were ordered to stay inside pubs and restaurants by police and eventually had to come out with their hands on their heads.

Italian photographer Gabriele Sciotto, who was watching the football at the Wheatsheaf pub in Borough Market, said he saw three men shot just outside the pub.

In a picture he took, a man wearing combat trousers, with a shaved head and what looked like a belt with canisters attached to it could be seen on the ground with two more bodies behind him.

"In two or five seconds, they shot all the three men down," Sciotto told the BBC.

The attack had harrowing echoes of the one on London's Westminster Bridge in March, when British Muslim convert Khalid Masood rammed his car into pedestrians before crashing into the barriers surrounding parliament.

He stabbed a police officer to death before being shot dead by a ministerial bodyguard. Police said they may never know his motivation.

"There was a van that crashed into the fences on London Bridge. And then there was a man with a knife, he was running. He came down the stairs and went to the bar," Dee, 26, who was visibly in shock and declined to give her last name, told AFP.

Promoted
Listen to the latest songs, only on JioSaavn.com
Alex Shellum at the Mudlark pub near the scene of the attack said a woman had come into the bar "bleeding heavily from the neck".

"It appeared that her throat had been cut," he told the BBC.