Kaitlin Bennett said she chose to pose with the rifle for her graduation photos Sunday because it made for a stronger symbol. 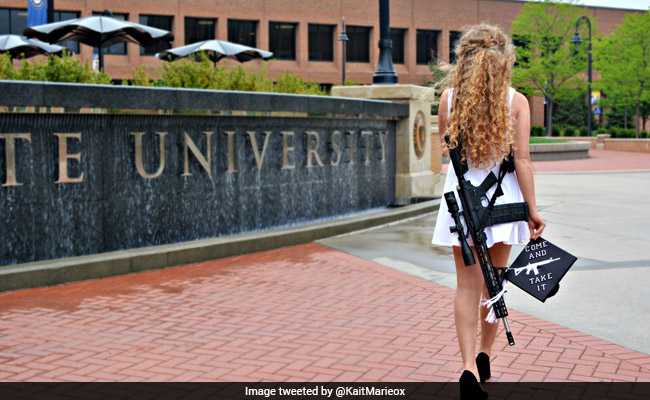 Bennett, who was raised by a Republican family knew her photo would provoke backlash.

If Kaitlin Bennett had been allowed to carry a gun at Kent State University as a student, she wouldn't have carried an AR-10 rifle. She would have carried her handgun instead.

But the 22-year-old said she chose to pose with the rifle for her graduation photos Sunday because it made for a stronger symbol: That, as a non-student, she could at last arm herself on the northeast Ohio campus. To Bennett, the photo was the culmination of her years as a conservative student activist, during which she advocated for students to be able to carry concealed weapons on the same campus where, almost 50 years ago, the Ohio National Guard opened fire into a crowd of unarmed students protesting the Vietnam War, killing four and wounding nine.

"I believe that if the government has it, we should have it. Machine guns - any weaponry," Bennett told The Post Tuesday afternoon, shortly after her graduation photo went viral, garnering more than 3,200 retweets and 1,000 comments on Twitter.

"To make sure the government can't go against the citizens," she said. "We should be able to protect ourselves against a tyrannical government."

Bennett, who was raised by a Republican family in Zanesville, Ohio, knew her photo would provoke backlash. She'd found herself at the center of controversy on campus plenty of times before. Just three weeks ago, she co-organized an open-carry demonstration that invited nearby residents to bring their firearms to the university. (Kent State University bans students, staff and faculty from carrying "deadly weapons," according to its website. State law allows graduates and visitors to openly carry weapons on campus, but only outdoors, according to a university spokesman.)

But Bennett never imagined the photo would spread so rapidly across the country. In the photo, Bennett is wearing a white dress and wedge heels. Her brother's AR-10 rifle, equipped with a scope, is slung over her shoulder. In her hand is her black graduation cap, marked with the cutout rifle and the words "COME AND TAKE IT." The historic slogan dates back to the Revolutionary War and the Texas Revolution against Mexico, she said, when Texan rebels fashioned a flag with the phrase over the image of a cannon as a sign of their defiance.

She was with her family and her boyfriend Sunday, the day after she graduated, when the photo was taken, she said. A campus officer was with the group as well, as Bennett had notified the university of her intent to photograph with the rifle.

The caption on the photo read, "Now that I graduated from @KentState, I can finally arm myself on campus. I should have been able to do so as a student- especially since 4 unarmed students were shot and killed by the government on this campus. #CampusCarryNow."

The photo was met with criticism. One Twitter user commented, "If person of color was walking around campus with a gun the whole damn police station would come and shoot them in a second #WhitePrivilege." Another wrote, "You have no reason to have that anywhere near an institution like @KentState and I firmly believe that by having photos like this taken where you're slapping their rules in the face you're the worst kind of gun advocate."

Aliah Kimbro, a 19-year-old Kent State sophomore, told Refinery 29 that it was hard for her to support Bennett as a black woman, knowing her own gun rights "aren't safe anywhere." 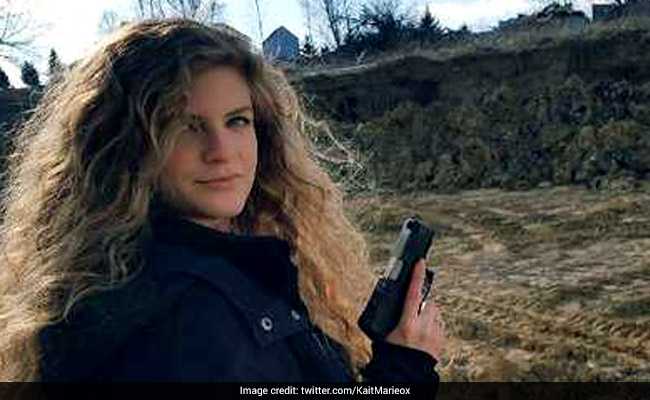 Kaitlin's photo was met with a lot of criticism, with people saying that black person could not have done that.

"To see that tweet, 'Come and take it,' as if lives weren't taken on that campus due to gun violence, just shocked me," Kimbro told Refinery 29. "Kent became an open-carry campus in the last year and there were many protests from that, the incident of May 4 not forgotten."

Since posting the photo, Bennett said she has also received death threats.

"I'm not nervous, because everyone knows that I'm armed," she said. "I don't know why they would threaten an armed person."

Kaitlin Marie tweeted "Thanks to all who have sent me death threats for taking a picture. You're the biggest advocates for gun rights. You proved exactly why people carry."

As president of the university's chapter of the libertarian media outlet Liberty Hangout, she's used to being attacked, said Bennett, who was also formerly president of the Kent State chapter of Turning Point USA, a conservative organization. She said conservative students on campus have in the past been assaulted and said that in April someone swung at one of Liberty Hangout's cameramen, breaking his equipment.

Kent State University was recently ranked the safest college campus with more than 10,000 students in Ohio and the 25th safest in the country by the National Council for Home Safety and Security. A university spokesman, Eric Mansfield, said in a statement that the university has a full-time, certified police force of more than 30 sworn officers who protect the campus. The officers are visible, well-trained and on duty 24/7 to protect students, staff and faculty.

Bennett called the university out on Twitter for touting their safety ranking, and wrote that her cameraman had been assaulted "for supporting the 2nd amendment."

"The presence of a firearm would have deterred this assault," she wrote.

Bennett isn't the first student this graduation season whose graduation photo with a gun has gone viral. In April, Brenna Spencer of the University of Tennessee, Chattanooga, posted a photo where she wore a "Trump for Women" T-shirt with a handgun in the waistband of her jeans while standing outside a Tennessee museum. She told ABC News that she wanted the photo to "show who I am as a person."

Bennett, who graduated Saturday with a bachelor's in biology, plans to pursue a job in the field. But she also plans to stay in Kent, Ohio, and continue her activism on campus and her involvement with Liberty Hangout.

She said many people have attacked her for suggesting students should carry rifles on campus. But that's not what she intended to do, she said. While she plans to buy an AR-style rifle for herself in the near future, she would use it primarily to practice target shooting in her family's expansive back yard, because the rifles are "super fun, and easier to shoot."

"On campus I would never carry an AR-10 for self-defense," she said. "There's so many people who aren't getting it - it's just a photo shoot."

Promoted
Listen to the latest songs, only on JioSaavn.com
Kaitlin Marie tweeted "I have no apologies for my graduation photos. As a woman, I refuse to be a victim & the second amendment ensures that I don't have to be."

(Except for the headline, this story has not been edited by NDTV staff and is published from a syndicated feed.)
Comments
kent university studentGuns on Campus