Princess Ubolratana, 67, the older sister of Vajiralongkorn, was announced as a candidate in the upcoming elections for the Thai Raksa Chart party 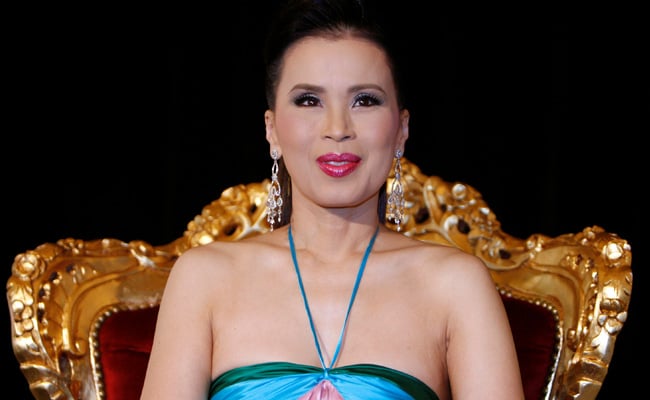 Ubolratana, 67, the older sister of Vajiralongkorn, was announced hours earlier as a candidate in the upcoming elections for the Thai Raksa Chart party, which is steered by the divisive Shinawatra political clan.

Her shock entrance into frontline Thai politics was a first by a member of the powerful royal family and promised to reshape the political landscape of the country.

But a late-night statement from the palace left no doubt over the King's displeasure at the move.

"The king and royal family exist in a status above politics," said the statement, published in the Royal Gazette and given blanket television coverage.

The statement did not criticise Ubolratana, instead praising her public work.

But it appeared aimed at those behind her sudden stride into politics.

"To bring a senior royal family member into the political system in any way is against royal traditions and the nation's culture... which is highly inappropriate." While the monarchy, which is vastly wealthy and protected from criticism by a harsh royal defamation law, has been seen as above the political fray, royals have intervened in moments of political crisis.

In a day of high drama, junta chief Prayut Chan-O-Cha also declared his candidacy for premier, running for the pro-military Phalang Pracharat party, moments after the princess's announcement.

Election authorities have a week to review which candidates put up by each party are allowed to run for premier after the March 24 poll.

Ubolratana's candidacy had electrified the build-up to the election, which has long seemed poised to return the ruling junta and its proxies to power.

Her involvement gave a royal sheen to the political machine of Thaksin Shinawatra, the self-exiled billionaire whose parties have won every election since 2001.

The princess, who gave up her royal titles to marry a foreigner, took to Instagram earlier Friday to say she was allowed to run under the constitution as a "commoner" had "allowed Thai Raksa Chart Party to use" her name.

The party falls under the tutelage of Thaksin, who stands at the heart of Thailand's bitter political schism -- loathed by the army and Bangkok elite, yet adored by the rural poor for health, welfare and education schemes.

The announcement appeared set to thrust him back onto the centre stage of Thailand's political drama.

He was toppled in a 2006 coup, while his sister Yingluck was booted from power in a 2014 military takeover and forced into exile to avoid a jail term.

The King's intervention has cast Thaksin's future role in politics into doubt.

Ubolratana, a colourful, public-facing royal in contrast to her more restrained brother King Maha Vajiralongkorn, relinquished her royal titles after marrying the American Peter Jensen in 1972.

But the couple divorced and she moved back to Thailand where she is still considered part of the royal family.

In Thailand, she experienced tragedy, losing her autistic son Poom to the 2004 Asian tsunami.

Known to the public for lead roles in Thai films, onstage singing performances, a vibrant fashion sense and a sizeable Instagram following, Ubolratana is the first-born child of the late King Bhumibol Adulyadej.

The stride into politics by a royal left Thais scrambling to work out what it may mean for the nation's tattered democracy.

"This is quite unprecedented and nobody is prepared for this," Professor Anusorn Unno of Thammasat University told AFP.

"I don''t think it''s the victory for the people, I think this is part of the adaptation of the ruling elite in terms of changing the landscape of politics." Since ascending the throne in 2016, King Maha Vajiralongkorn has reorganised palace affairs.

The vastly wealthy Crown Property Bureau is now under his personal stewardship, he has appointed several new privy counsellors and established a highly trained personal guard.

Crucially he has appointed a new army chief from a different faction of the military to the ruling junta.

His coronation will be held in May.