About 3,000 people have completed the courses in groups of 500 since March 2018, an official said, describing the programme as "strictly voluntary". 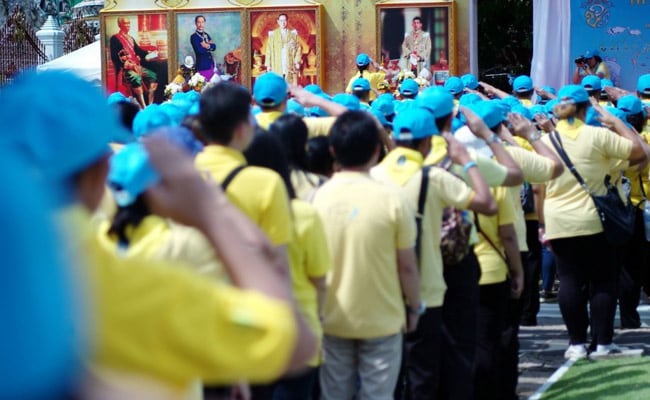 Thousands of civil servants, police and teachers are being sent to a military camp in Thailand for intensive training in community service and loyalty to the monarchy, according to the Royal Palace and interviews with trainees and organisers.

The programme, established last year, highlights the way in which King Maha Vajiralongkorn, 67, is asserting his will on Thai government and society to a greater extent than any sovereign since the end of absolute monarchy in 1932, some experts say.

Seven programme graduates who participated in the "Volunteer Spirit 904" training told Reuters they woke at 5 a.m. for light group exercise, then lined up to practise military-style salutes before classes on the history of Thai kings and training for community service.

At the end of the training programme, which lasts from 15 days to six weeks, they are declared "Karatchakan Suan Pra-ong", or "Officials in His Majesty's Service" and tasked with promoting the monarchy, and their efforts are tracked through messaging apps, the graduates said.

The 904 courses are coordinated by the permanent secretary of the Prime Minister's Office, Theerapat Prayurasiddhi. The palace directed all questions to his office.

"The king has the royal policy to create unity among the people," Theerapat said. "Then everything will lead to the people's happiness and a secure nation."

About 3,000 people have completed the courses in groups of 500 since March 2018, he said, describing the programme as "strictly voluntary".

The goal of the 904 programme - named after the king's security call sign - is to create a corps of influential people to "develop and defend the country and create people who are loyal to the monarchy," the Royal Palace website said.

Reverence for the monarchy has long been part of traditional Thai culture, but King Vajiralongkorn, a career military officer, is formalising and organising public devotion in a way that hasn't been seen since the end of absolute monarchy, said Joshua Kurlantzick of the U.S.-based Council on Foreign Relations.

"It builds on the past, but it's much, much clearer with this king and much more assertive," Kurlantzick said.

Few details have been made public about the programme, which is linked to the palace-sponsored "Volunteer Spirit" community service corps of nearly 6 million volunteers.

The training is run by officials linked to the palace and military officers, according to the seven graduates, a lecturer and an organiser who spoke to Reuters.

"THERE MUST BE DISCIPLINE"

Live-in courses are held at the Bangkok headquarters of the First Infantry Regiment, which was recently transferred to the king's personal command.

"There must be discipline and there must be rules," said Sumet Tantivejkul, 80, who teaches the courses about King Bhumibol Adulyadej, the king's widely revered father.

"Participants live together, eat together, sleep together ... Old people stay with young people so the young learn from the experience of the old and the old can also learn about the young," Sumet said.

Graduates of the programme said that along with training for community service, one main focus of lessons is the monarchy as an ultimate solution to Thailand's problems at a time of political division which broadly pits military-royalist conservatives against supporters of populist parties.

In the past 15 years, street protests led by conservatives have led to the eventual removal of four populist prime ministers by court rulings or military action.

Tensions have spilled into violent protests by both camps in recent years and two military coups - in 2006 and 2014. An election in March did not heal divisions.

The most recent coup leader, Prayuth Chan-ocha remained, prime minister despite allegations of cheating from opposition parties, who were in turn branded as disloyal to the monarchy by Prayuth's pro-military party. No Thai party says it opposes the monarchy.

Sinchai Chaojaroenrat, an independent scholar who has written books on Thai culture and religions, describes the 904 programme as part of a "strategy in merging the monarchy with every government agency."

Thailand has been a constitutional monarchy since a 1932 coup, but the king has never been a mere figurehead. To some Thais, he is an infallible demigod.

Following the seven-decade reign of his father, Vajiralongkorn has asserted his personal authority in several ways, according to analysts observing his public actions.

In July 2017, the military-appointed legislative assembly amended a 1936 law to give the king full control of the Crown Property Bureau, which manages the crown's holdings estimated to be worth more than $30 billion.

They previously had been managed by the Finance Ministry.

Such changes have met little open criticism in a country where insulting the king can mean 15 years in jail.

Since they were first established, the 904 courses have been expanded from palace officials, soldiers, police and civil servants to include university lecturers and students.

Among those proud to be part of the programme is Phunyawee Suwanleela, 38, who recently helped lead royal volunteers in cleaning up Bangkok's iconic Temple of Dawn - after first saluting a portrait of the king.

"We are trained to spread the word to make others more conscious, so they will love the country like we do," said Phunyawee, who works in Thailand's version of the FBI.

Graduates are divided into groups of 30 and they use instant messaging chat groups to share their progress in spreading the message, said civil servant Nattaporn Rathasilapin, 34.

"Our group were given a target of 8,900 people to reach out to over several months," Nattaporn said.

But one man in his 40s from outside Bangkok, who spoke on condition of anonymity for fear of repercussions, said that despite being a strong royalist he found certain aspects of the programme too manipulative.

Specifically, he complained that he was now expected to spread the message to school children and to prove that they had been affected.

"There must be at least some photos that show our audience teared up with gratitude," he said. "We have to find someone who cried."

Theerapat confirmed that the 904 graduates are encouraged to give public talks to share their knowledge.

"On the training activities, each group has to take photos to report on what they have done," he said. "But there is no specific goal to make people cry. Whoever may be inspired to tears, that is up to them."