On Jan. 6, 2017, Dean was at the Fort Lauderdale-Hollywood International Airport when a gunman opened fire, killing five people. She hid behind a luggage cart and was shielded by a stranger, according to WPTV. 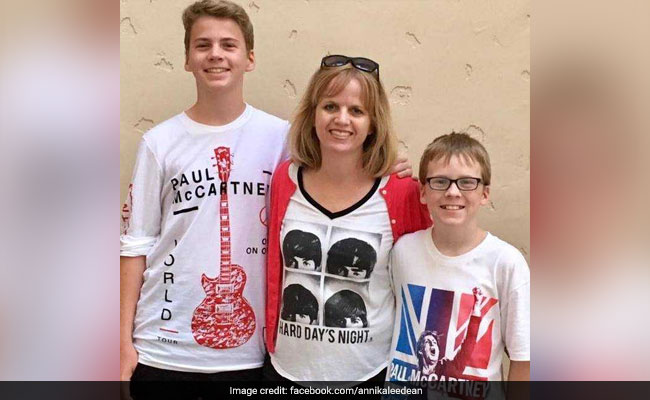 Annika Dean survived last year's mass shooting at the Fort Lauderdale-Hollywood airport by hiding behind a luggage cart. Her 14-year-old son, Austin, survived this week's shooting at a Parkland, Florida, high school by hiding in a classroom.

"I am in disbelief; I really am," Dean said in an interview with WPTV in West Palm Beach.

At about 2:40 p.m. Wednesday, a gunman went on a rampage, killing 17 people at Marjory Stoneman Douglas High School.

Austin texted his mother from his hiding place in a classroom.

He typed, "Mom, there's a school shooting drill going on. It's really scary, they got a gun and fired it . . . IT'S NOT A DRILL," she said in the interview.

"As soon as I realized that it was an actual shooting, my heart just sank," Dean, an art teacher, said.

In his texts, Austin told her people had been running and screaming, but he was, thankfully, safe. "He said, 'But just in case, I love you,' " she told WPTV.

"I was grateful for every text he was sending me," she said in the interview. "It's different when it's your kid. And I wasn't with him. He was on his own."

Austin, a freshman, was tucked with 30 other students in a JROTC classroom, WPTV reported.

Dean said two of her closest friends were not as lucky as she was. One had a daughter who was killed at the school, and another has a child who was wounded. She said she knows both of the teens. "I'm their Sunday school teacher," she said.

She told WPTV she, unbelievably, was able to relate to her son's fear as he hid in the classroom.

"I definitely had a sense of what he was feeling and what he was going through," she said.

On Jan. 6, 2017, Dean was at the Fort Lauderdale-Hollywood International Airport when a gunman opened fire, killing five people. She hid behind a luggage cart and was shielded by a stranger, according to WPTV.

"As soon as I heard the gunfire, I knew it was gunfire," she told the station at the time.

Now, she said she feels grateful she is alive and her son is alive. Somehow, they both escaped physically unharmed.