The drills were presided over by Taiwan President Tsai Ing-wen and watched by the visiting king of eSwatini. 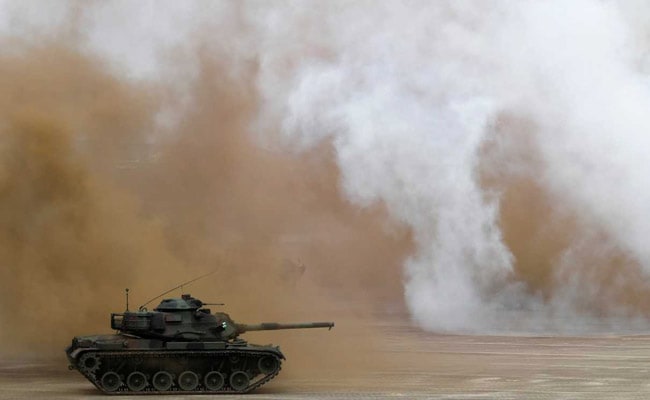 The exercise was a simulation of an invasion of the island by China's Army. (Reuters)

Taichung, Taiwan: Taiwan simulated repelling an invading force on Thursday and used civilian-operated drones for the first time as part of annual military drills on the self-ruled island amid escalating tensions with China.

The drills were presided over by Taiwan President Tsai Ing-wen and watched by the visiting king of eSwatini, the African kingdom formerly known as Swaziland at the centre of a diplomatic tug-of-war between Taiwan and China.

China claims self-ruled Taiwan as its sacred territory, under its "one China" policy, and Beijing has never renounced the use of force to bring what it sees as a wayward province under its control.

China's air force has conducted a series of military manoeuvres near the island in recent months that Taipei has denounced as intimidation.

"Our armed forces' combat effectiveness is the guarantee of our national security. It is the flourishing basis of society, and it is the back-up force for our values of democracy and freedom," Tsai said at the Han Kuang drills in the central Taiwanese city of Taichung.

"So long as our armed forces are around, Taiwan will surely be around," she added.

More than 4,000 personnel and over 1,500 pieces of equipment were deployed in the annual exercise, with drones flying overhead to provide battlefield surveillance and construction workers practising repairs to an airbase runway.

China has called on eSwatini to sever relations with Taiwan before early September, when Beijing will host a summit of African leaders.

"In the process of the drills taking place, our armed forces' displayed their fighting capacity and our ally nation was able to observe," said Taiwan Defence Ministry spokesman Chen Chung-chi.

"This is one way we hope to deepen our dialogue on both sides," he added.

Taiwan has said it has received assurances from eSwatini that ties are secure.

In a move certain to rile Beijing, Chen said Taiwan was eager to take part in a U.S.-hosted naval drill. The Pentagon last month withdrew an invitation to China in response to what it sees as Beijing's militarisation of islands in the South China Sea.

The Rim of the Pacific exercise, known as RIMPAC, is billed as the world's largest international maritime exercise, held every two years in Hawaii in June and July.

Tension between Taiwan and its big neighbour has increased in recent months, with China suspicious Tsai's administration wants to push for the island's formal independence.

Tsai has said she wants to maintain the status quo, but will protect Taiwan's security and not be bullied by Beijing.

Taiwan is equipped with mostly U.S.-made weaponry and wants Washington to sell it more advanced equipment, including new fighter jets.

Military experts say the balance of power between Taiwan and China has shifted in favour of China, which could probably overwhelm the island unless U.S. forces came quickly to its aid.
© Thomson Reuters 2018

(Except for the headline, this story has not been edited by NDTV staff and is published from a syndicated feed.)
Comments
China-taiwan RelationsTsai Ing-wenMilitary exercise