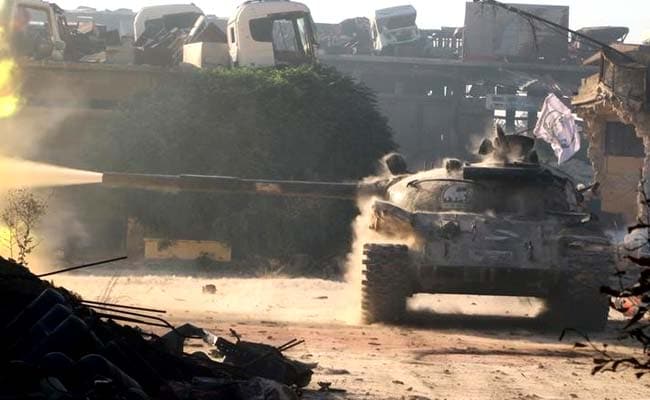 The Assad regime has repeatedly denied that it has used chemical weapons in Syria.

United Nations, United States: A UN investigation has established that President Bashar al-Assad's forces carried out at least two chemical attacks in Syria and that ISIS terrorits used mustard gas as a weapon, according to a report seen by AFP on Wednesday.

The panel was able to identify the perpetrators of three chemical attacks carried out in 2014 and 2015, but was unable to draw any conclusions in the other six cases that it has been investigating over the past year.

The report from the Joint Investigative Mechanism (JIM) found that the Syrian regime dropped chemical weapons on two villages in northwestern Idlib province: Talmenes on April 21, 2014 and Sarmin on March 16, 2015.

In both instances, Syrian air force helicopters dropped "a device" on houses that was followed by the "release of a toxic substance", which in the case of Sarmin matched "the characteristics of chlorine".

The panel found that the ISIS "was the only entity with the ability, capability, motive and the means to use sulphur mustard" in an attack on the town of Marea in northern Aleppo province on August 21, 2015.

The Assad regime has repeatedly denied that it has used chemical weapons in Syria, but the report said that in the three cases it had "sufficient information to reach a conclusion on the actors involved."

Calls For Action Against Syria

The JIM was set up by the Security Council a year ago to investigate the use of chemical weapons and for the first time to determine who is responsible for the attacks.

Most of the cases investigated pointed to the alleged use of chlorine gas in barrel bombs dropped from helicopters.

The United States, Britain and France had long maintained that only the regime has helicopters, but Russia, Damascus' ally, insisted that there was no concrete proof that Assad's forces carried out the attacks.

"When it comes to proliferation, the use of chemical weapons, of such weapons of mass destruction, we cannot afford to be weak. The council will have to act," he said.

Based on the findings, the Security Council could decide to impose sanctions on Syria or ask the International Criminal Court to take up the matter as a war crime.

But many diplomats say Russia would be unlikely to back such a move, despite the JIM's strong findings of chemical weapons use in the three cases.

Syria agreed to get rid of its chemical stockpile and to refrain from making any use of chemical weapons when it joined the Chemical Weapons Convention in 2013, under pressure from Russia.

The findings prompted immediate calls for the perpetrators to face justice.

The JIM report "points to the Syrian government's and ISIS' responsibility for the sickening, illegal use of chemical weapons in Syria," said Louis Charbonneau, Human Rights Watch's UN director.

"The UN Security Council should now ensure that those responsible for these attacks are brought to justice in a court of law. Without accountability, the cycle of abuses in Syria by all parties to the conflict -- whether by chemical or conventional weapons -- will continue unabated."
Comments
Bashar al-AssadISISSyrian Civil WarJoint Investigative MechanismUnited NationsChemical Attacks In SyriaMustard Gas