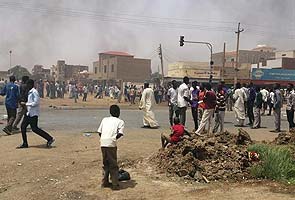 Khartoum, Sudan: Seven hundred people have been arrested during a week of the worst unrest in central Sudan in years, the government said on Monday, as protests continued against President Omar Hassan al-Bashir.

One week after the start of demonstrations against subsidy cuts, police once again used teargas on protesters, this time women students at the Ahfad university in Khartoum's twin-city of Omdurman who chanted "We don't want Bashir", witnesses said.

Another protest by 300 people that took place in Khartoum's Burri district went peacefully, a witness said. "The people want to overthrow the regime," the crowd shouted. The march was much smaller than protests in the past few days in the area.

At a news conference called by the government to put forth its side of the week's events, Interior Minister Ibrahim Mahmoud Hamad said 34 people had died, far fewer than the up-to-150 estimated by Sudanese human rights activists and some diplomats.

Hamad said police had not used live ammunition against protesters who, he said, had attacked more than 40 petrol stations, 13 buses, and many private cars and government buildings.

"This has nothing to do with protests," Hamad said and added that there were indications that rebels from Sudan's borderlands were involved in the violence.

He dismissed photographs of shooting victims circulating on the Internet as fakes. "Most pictures on social media are actually from Egypt," he said.

In a tense exchange, journalists challenged Hamad, one of the most powerful ministers in Bashir's cabinet. "Why do you keep lying?" one reporter asked him. "It's known the people are killed by NCP (Bashir's National Congress Party) militia."

Information Minister Ahmed Belal Osman accused al-Arabiya of trying to bring an "Arab Spring" to Sudan by misreporting the protests. Several local newspapers have also been closed because of their coverage of the unrest, he said, adding that they would be allowed to resume work at some point later.

The government of Bashir, who seized power in a 1989 coup, has resisted calls to repeal the subsidy cuts that pushed up gasoline prices by almost double overnight.

On Saturday, a group of Islamists and members of Bashir's National Congress Party urged the president to reverse the austerity measures.

Britain's Africa Minister Mark Simmonds urged Sudan "to cease the use of live ammunition immediately," according to a statement.

The cuts have been driven by a financial crunch since the secession of oil-producing South Sudan in 2011, which deprived Khartoum of three-quarters of the crude output it relied on for state revenues and foreign currency needed to import food.

Promoted
Listen to the latest songs, only on JioSaavn.com
The protests are much larger than demonstrations last year against corruption, inflation and earlier fuel subsidy cuts. But they are tiny compared to the masses who turned out to oust rulers in Egypt and Tunisia.

Bashir has stayed in power despite rebellions, U.S. trade sanctions, an economic crisis, an attempted coup last year and an indictment from the International Criminal Court on charges of masterminding war crimes in the western region of Darfur.
© Thomson Reuters 2013