Efforts to contain the fire, which broke out in rural Yolo County, have been complicated by rough terrain. Hundreds of residents have evacuated. 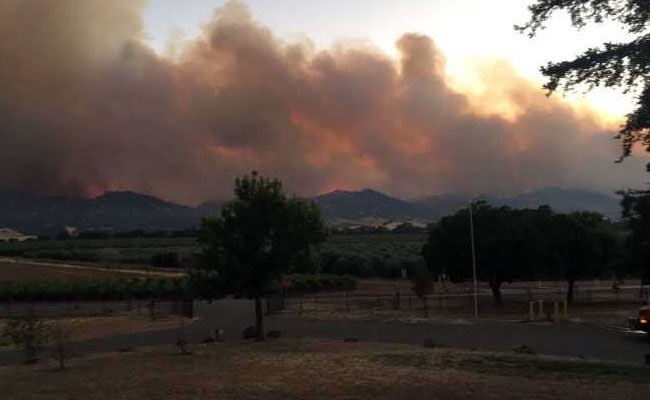 The County Fire was 15 percent contained with more than 2,600 fire personnel battling the flames.

Wind gusts of up to 25 miles (40 km) per hour may hamper firefighters battling a wildfire in Northern California on Wednesday, the National Weather Service said.

Efforts to contain the fire, which broke out on Saturday afternoon in rural Yolo County, west of Sacramento, have been complicated by rough terrain. Hundreds of residents have evacuated.

The United States is in the midst of an unusually active fire season, with the risk significantly above normal for many western states, according to federal forecasters.

The County Fire was 15 percent contained with more than 2,600 fire personnel battling the flames, the California Fire authority said.

"Their efforts have been hampered on the northern end of the fire by steep, inaccessible terrain," the agency said in an advisory.

Temperatures will be in the mid 80s Fahrenheit, the National Weather Service said.

The blaze threatened about 980 structures, a local NBC affiliate reported, as authorities issued evacuation orders and advisories to hundreds of residents.

The smoke reached about 75 miles south to San Francisco, leaving a film of ash on cars and windows. No casualties have been reported.

Wildfires have burned through nearly 2.5 million acres in the United States from Jan. 1 through Monday, well above an average of about 2.3 million for the same period over the last 10 years, according to the National Interagency Fire Center.

In Colorado, firefighters face hot temperatures, low humidity and gusty winds on Wednesday as they battle eight major blazes which have torched over 140,000 acres in the drought-stricken state.

The largest wildfire, the Spring Fire, was 85,000 acres in southern Colorado. It has destroyed more than 100 homes, forced the evacuations of several small communities and closed a key mountain-pass road. The wildfire was just 5 percent contained.

Danish national Jesper Joergensen, 52, is suspected of starting the fire and is being held on first-degree arson charges. He is in the country illegally and may face deportation, police said.

(This story has not been edited by NDTV staff and is auto-generated from a syndicated feed.)
Comments
Northern California wildfirewildfire in CaliforniaWildfire in Yolo County