Strollers out, mom and dad in 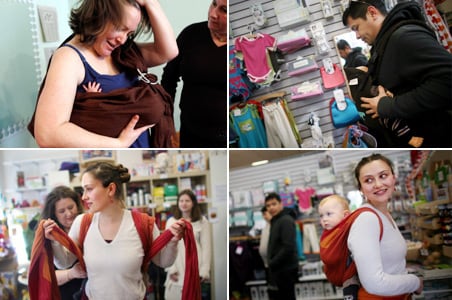 New York: For most people, the 2009 movie "Away We Go," directed by Sam Mendes, has all but faded from memory, a wry little comedy that didn't gain much traction at the box office and was all but ignored during the past awards season.

But for some people - well, some parents at least - one scene in that movie continues to echo at playgrounds, coffee shops and on city sidewalks. The characters Burt and Verona, played by John Krasinski and Maya Rudolph, arrive at the home of a friend and mother of young children, played by Maggie Gyllenhaal, and proudly present her with something she does not own: a stroller.

The result is not the warm "Thank you" they expect.

"I love my babies," she exhorts before banishing the stroller from her house and flying into a rage. "Why would I want to push them away from me?"

And that's exactly the question some parents are asking themselves these days. For them, the last decade's coveted Bugaboo or Maclaren stroller has been largely supplanted by baby carriers - chic wraps, minimalist pouches and soft structured packs.

Hardly new, wraps and other types of baby carriers are traditional in many parts of the world, and Western versions have been used in North America and Europe for decades. But lately, "wearing" one's baby has taken on a certain cachet, with celebrities like Brad Pitt and Keri Russell pictured in star-gazing magazines and blogs with their babies strapped to their bodies. Upscale versions of the traditional baby carrier are sold in stores from SoHo to Santa Monica, Calif.

On a breezy afternoon last week, a steady stream of women cruised through Metro Minis, an airy boutique on Park Avenue in Manhattan, which opened in 2007 and has since become the city's hub for young mothers who collect baby carriers the way some women collect handbags.

A tall, lithe woman from Hell's Kitchen in West Midtown hoisted her 11-month-old daughter on her back in an Asian-style mei tai she had chosen from a drawer of samples, while another woman in sleek jeans gazed at herself in a full-length mirror, her baby snug against her chest in a soft black canvas carrier that matched her jacket. A young mother from Queens adjusted her snoozing newborn in a fuzzy fleece pouch as other mothers perused the store's approximately 60 models of baby carriers, ranging from a $40 cotton wrap to a $540 sling, hand dyed and loomed from lustrous wild silk. At one point, Natasha Ossinova, a 33-year-old obstetrics nurse, sailed in with her 13-month-old son, Vasily, cinched to her back with a five-yard stretch of woven fabric in shades of burnt orange and burgundy.

"At first it was like, 'Am I trying to be an indigenous tribal woman?' " Ossinova said, noting that she had four other carriers at home. "But I got over that hump, and I'm quite passionate about it now."

In recent years, the number of carriers has expanded from a handful of styles to scores. "In 2004, there were barely any carriers," said Bianca Fehn, an owner of Metro Minis. "You had to find these work-at-home moms who made them and go on a waiting list for weeks or even months to get a carrier." Before opening the store, she started an Internet community called Slings in the City that held regular baby carrier demonstrations around town. The demonstrations are now offered at Metro Minis four times a month, and are usually crowded.

In 2009 at the ABC Kids Expo in Las Vegas, there were at least 30 companies promoting designer baby carriers, many of them created within the last five years. And between 2006 and 2008, overall sales of industry-certified carriers rose

43 percent to $21.5 million, according to the Juvenile Products Manufacturers Association. The ERGObaby, a soft carrier structured like a backpack that was introduced in 2003, has seen sales rise 200 percent since 2007, according to Karin Buck, a company spokeswoman. The Moby Wrap, a length of stretchy cotton that attaches babies to their caregivers with a series of origami-like tucks and twists, has doubled in sales almost every year since it was introduced in 2003, said Marisa Frantz, a company spokeswoman, and it is poised to debut this month in retail locations of Babies "R" Us.

But as carriers have grown more popular, their safety has been questioned, with particular alarm about bag-style slings, which have contributed to the suffocation deaths of several infants. On Tuesday, Inez M. Tenenbaum, the head of the Consumer Product Safety Commission, announced a forthcoming warning about slings, saying that "we know now the hazard scenarios for very small babies" carried in them. Many specialty stores, like Metro Minis, do not sell bag-style slings whose safety has been challenged, and instructs buyers to position babies in any sling upright and tight against the caregiver.

While most people using baby carriers extol the convenience of having their hands free to steer a toddler, dial a cell phone or maneuver through a grocery store, some see it as an integral part of their parenting philosophy, which holds that babies should be worn on the body to foster a strong attachment to their parents.

Dr. William Sears, a pediatrician and parenting expert, coined the term "babywearing" in 1985 when he and his wife, Martha, sewed a sling from some old material to carry their infant son. He has championed the practice ever since, citing it as helping make babies smarter, calmer, more attentive, less colicky and more likely to develop healthy sleep habits than their counterparts in strollers.

Other experts dismiss any suggestion that strollers may be psychologically detrimental.

"Close physical contact is important for babies," said Byron Egeland, a psychologist at the Institute of Child Development at the University of Minnesota, who has studied and written extensively about infant attachment. "But I would quickly add that a parent using a stroller is not going to make or break whether their child is securely or anxiously attached."

Still, a certain strain of conscientious parent has become devoted to baby carriers lest Junior suffer detachment prompted by a stroller. Indeed, in some precincts of the baby-wearing faithful, parents boast of rarely using a stroller or not even owning one. Some scoff outright at strollers, as on the holistic-oriented Web site Mothering.com, where readers have identified themselves as "anti-stroller" and labeled the device an "isolation pod."

Among most new parents, however, feelings about baby carriers are less inflamed.

At a meeting of new mothers last week at boing!, a baby shop in the Park Slope neighborhood of Brooklyn, a dozen women with newborns gathered to confer about nipple shields, nap patterns and swaddling techniques. Their talk eventually veered toward baby carriers, which most of them had in addition to a stroller, and were acclimating to using.

Claire Moore, 33, nuzzled her 7-week-old daughter, Zoe, while explaining that her carrier had been picked by her husband, Adrian. Walking their dog most mornings in nearby Prospect Park, he had spent months during her pregnancy trying to figure out the most practical, comfortable carrier for them both by surveying the park's many fathers with babies tethered to their chests. Eventually, Moore said, he settled on the ERGObaby; they bought one in cranberry.

Promoted
Listen to the latest songs, only on JioSaavn.com
"He'd been keeping an eye out and knew that was the one," she said. "All the dads are wearing it."