The work was an image of a girl in mourning painted on one of the emergency doors of the Parisian venue, where ISIS gunmen massacred 90 people. 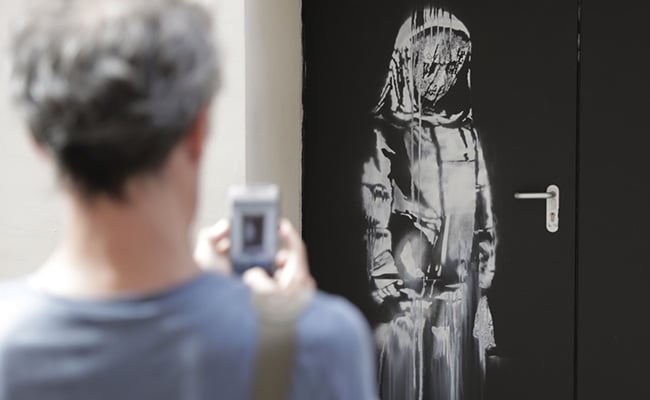 Italian police said Wednesday they had retrieved a work by famed street artist Banksy commemorating the victims of the November 2015 Paris terror attacks stolen from the Bataclan concert hall.

The work was an image of a girl in mourning painted on one of the emergency doors of the Parisian venue, where ISIS gunmen massacred 90 people. It had been cut out and taken in 2019.

"We have recovered the door stolen in the Bataclan with a Banksy work portraying a sad young girl," a senior Italian police officer from Teramo, in Italy's central east Abruzzo region, told AFP. The raid was conducted with French police, he added.

The work was found in an abandoned farmhouse in Abruzzo, according to l'Aquila prosecutor Michele Renzo, who said further details would be provided on Thursday.

Works by Banksy, known for their distinctive style, irreverent humour and thought-provoking themes, have been found on walls, buildings and bridges from the West Bank to post-Hurricane Katrina New Orleans.

At auction, they have sold for more than $1 million.

The portion of the Bataclan door is not the only Banksy to have been stolen from Paris.

In 2018, the artist "blitzed" the French capital with murals during a whirlwind trip, which he said was to mark the 50th anniversary of the Paris student uprising of 1968.

After he appeared to authenticate eight of the Paris works on his Instagram account, it did not take long for thieves to strike.

Works stolen included a mural of a businessman in a suit offering a dog a bone, having just sawed the animal's leg off.

Another was an image of a masked rat wielding a box cutter, which disappeared from outside the Pompidou Centre.

Banksy took on the rat as his avatar, a symbol of the vilified and downtrodden, in homage to Paris street artist Blek le Rat. Blek started out in 1968 when a general strike by students and workers brought France to a halt.

Some of the stolen works have since been recovered and fans have covered some of his Paris street art with Plexiglass to protect them.

But one mural of a migrant girl was defaced with blue spray paint shortly after news of its discovery spread on social media.

Banksy is believed to have started out as a graffiti artist in London, although he has kept his identity a secret.

The most dramatic of his Paris 2018 creations was a pastiche of Jacques-Louis David's "Napoleon Crossing the Alps", with Bonaparte wrapped in a red niqab. It appeared on a wall in an ethnically mixed district of northern Paris.