The brothers strategically split up to get training in different esteemed kitchens around the world, published books on cooking and presented a popular TV show. 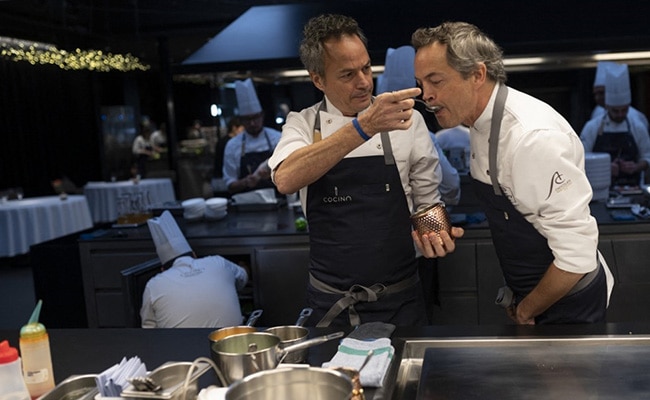 The chef brothers credit their grandmother for their passion for cooking.

When they were just eight years old, Spanish twins Sergio and Javier Torres set a goal: they wanted to become chefs who were among the top in their field. To achieve this, they strategically split up to get training in different esteemed kitchens around the world, published books on cooking and presented a popular TV show.

Over four decades after they surprised their family by saying they wanted to be chefs, Sergio and Javier's Barcelona restaurant, Cocina Hermanos Torres, was awarded a third Michelin star last month.

"We developed a plan, that I think is a perfect plan," a smiling Javier, 51, said at the restaurant, one of only 13 in Spain and Portugal with the top three-star ranking from the prestigious French guide.

"When we started to go out of Barcelona we thought that Sergio would take one path, I would take another, and we would never coincide until we were ready," he added.

The journey took the twins -- who grew up in a working-class Barcelona neighbourhood -- to different elite restaurants in Spain, Switzerland, and France.

Before moving to Paris where he worked with top French chef Alain Ducasse, Sergio spent two years at the award-winning Le Jardin des Sens in Montpellier which is also run by twins -- Jacques and Laurent Pourcel.

"We were separated but every month we met up in a restaurant, ate well, spent the little money we had, and developed the next steps of our strategy," said Sergio as sat beside his brother.

Each brother specialised in different areas -- one learned to cook meat and vegetables, the other fish and bread, he added.

Both siblings credit their grandmother for their passion for cooking.

She was part of a wave of people who moved from the southern region of Andalusia to the more industrialised Catalonia in the northeast in search of a better life following Spain's devastating 1936-39 civil war.

"Our grandmother looked after us, and since she was in the kitchen all day we literally grew up in a kitchen," said Sergio.

After earning two Michelin stars with their previous project "Dos Cielos" and becoming familiar faces thanks to their participation in a cooking show, they decided to open Cocina Hermanos Torres in 2018.

The twins visited some 200 possible locations before settling on an industrial building near Barcelona's iconic Camp Nou football stadium.

They invested nearly three million euros to convert it into the restaurant, which seats a maximum of 50 people on tables with no wall separating them from the three workstations where staff prepare meals.

"We wanted to reflect what we experienced in our childhood, which was a kitchen and a table, and everyone around the table," said Javier.

The tasting menu costs 255 euros ($265), with another 160 euros if it is paired with wine, a stiff price in a country where the monthly minimum wage is around 1,000 euros.

Praised for its creative and playful cuisine, among the dishes served is cured squid with poultry broth and an onion soup with Parmesan cheese and truffles.

"You will experience flavours that you have never experienced before because you will discover a cuisine where you will like what you don't like," said Sergio.

On a recent visit at noon, 50 staff members -- many of them young -- are busy at work finalising details before customers arrive.

"It seems like today a chef is like a 'superstar'. It's a very difficult road, very difficult, with long hours and it's very hard to make it, it takes tremendous perseverance," said Sergio.

"You have to risk it, go for broke, and give it your all because if you don't, you are not living," he added with a smile.