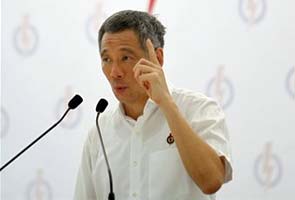 Singapore: The Prime Minister is admitting mistakes and even apologising. It's a sign that the party that has dominated Singapore and told the island state what's best for a half-century could be facing its strongest electoral challenge.

The People's Action Party (PAP), with the son of Singapore founding father Lee Kwan Yew at the helm, is still expected to overwhelmingly win Saturday's parliamentary election and remain in power for at least the next decade.

But more seats are being contested than ever before, by a new crop of well-educated Opposition candidates. A gradual opening of traditional media alongside unfettered Internet debate has meant an increasingly substantial discussion of campaign issues, such as immigration and housing costs.

"The Opposition in the past was not able to recruit because there was a very strong climate of fear for a very long time," said Gillian Koh, a senior research fellow at Singapore's Institute of Policy Studies. "The situation today is very different. We've seen a liberalisation of the political space."

Dozens of PAP posters even have been defaced - nearly unheard of in this Southeast Asian country, where vandalism can get you a caning, the Colonial-era punishment famously meted out to American teenager Michael Fay in 1994.

"I'm not against the PAP," 35-year-old restaurant manager Francis Loh said at a Workers Party rally last weekend. "I just want more opposition in Parliament and someone to speak for the poor people."

The PAP has had to evolve as Singaporeans traveled and studied abroad more and became better educated. Gone are the days from the 1960s to 1980s when the elder Lee would imprison suspected communists without trial for years, and when he told the state-owned Straits Times in 1987, "We decide what is right. Never mind what the people think."

In recent speeches, Prime Minister Lee Hsien Loong - Lee Kwan Yew's son - has warned voters to avoid Opposition candidates, reminding them that the government favours pro-PAP districts with funding for improvements to the public housing where about 80 percent of Singaporeans live.

But he also has admitted several mistakes, including failing to build enough public housing overall and not expanding the transportation network to accommodate a surge in foreign workers.

"We're sorry we didn't get it exactly right, but I hope you'll understand and bear with us," he said. "We made mistakes, we have slip-ups. We must apologize, acknowledge, put it right."

In power for 52 years, the PAP controlled all but two of the last Parliament's 84 seats. The Opposition never has held more than four. This year, opposition parties are contesting 82 of 87 seats.

The bedrock of the PAP's support is its delivery of jobs and education, its reputation for an efficient, corruption-free bureaucracy and a history of savvy policy choices - such as embracing English as a common language - that helped boost gross domestic product per capita to $43,867 last year from $428 in 1960.

The economy, based on manufacturing, shipping, finance and tourism, expanded a record 14.5 percent last year. Rights groups condemn Singapore's use of the death penalty for drug couriers. Speech about race and religion is severely restricted and defamation lawsuits by PAP leaders have bankrupted opposition figures and deterred criticism of the government.

But Singapore is hardly a pariah. It's a staunch ally of the US, has close ties to China's leadership and has helped facilitate regional integration.

"Singapore's great virtue is that they have been able to skirt this fine line between democracy and autocracy, having the mechanics of democracy without the substance, but it's worked," said Benjamin Reilly, a political scientist at Australian National University.

Rich people love the place and trust the PAP. Singapore has the world's highest percentage of millionaires - households with at least $1 million in liquid assets - at 11.4 percent of the country's 5 million population, according to Boston Consulting Group.

"When I consider investing in Singapore, I don't have to worry about political instability, something that I can't say about some other countries," said Ravi Thakran, managing partner of a $650 million private equity fund of luxury goods maker LVMH.

The central figure in the PAP and modern Singapore life has been Lee Kuan Yew, a Cambridge-trained lawyer who was prime minister from 1959 to 1990 - during limited self-rule under the British, through a two-year federation with Malaysia that ended in 1965, and then during independence.

At 87, Lee is still an influential Cabinet minister. Famed for his blunt rhetoric, Lee took part in the nine-day official campaign that ended Thursday, warning Singaporeans that only the PAP can ensure prosperity.

The PAP traditionally attracted Singapore's best and brightest, such as Michelle Lee, 35, who attended the most prestigious high school, graduated with honors from London School of Economics and worked at financial houses and the central bank.

But she's running for the Opposition Singapore Democratic Party.

"Before I went to university, I was very pro-PAP," said Lee, now a high school teacher. "But my eyes were opened. I would not be able to live with myself if I joined the PAP."

Newspapers and television, which are closely controlled by the government, have begun airing a few dissenting views.

Reilly said the government could afford even more liberalisation. "I think if they did that the PAP would win anyway. They have performance legitimacy," he said.

The government's most important policy decision since the last election in 2006 was to allow a surge of foreign workers. About 150,000 foreign workers entered Singapore per year from 2007 to 2009, and they now make up about one-third of the island's 3 million work force. Singaporeans complain that the foreigners have depressed wages, boosted housing prices and clogged public transportation - and opposition leaders are tapping into that unease.

"The problem started with the crazy number of foreigners they brought in the last few years," said Chua Beng Huat, a sociologist at National University of Singapore. "They were looking for growth at all costs. The quality of life for Singaporeans has actually declined, especially for the middle class and lower."

The government cut back the number of workers allowed in to 80,000 last year, but stuck to its argument that foreigners are essential to expand the economy.

Speculation about Singapore after the elder Lee dies has increased since he suffered an abnormal heart rhythm in 2008. Some observers predict investor confidence could suffer or that the PAP could split into factions.

Promoted
Listen to the latest songs, only on JioSaavn.com
"When he dies, I don't think Singapore will go down because he built a good foundation," said Lilian Tan, a 50-year-old flower shop owner. "In my heart, I respect Lee Kuan Yew a lot. I don't know about the opposition, I only know about the PAP. As long as they do a good job, we only need the PAP."