Sikh Pack Free Meals For Over 30,000 In Self-Isolation In New York 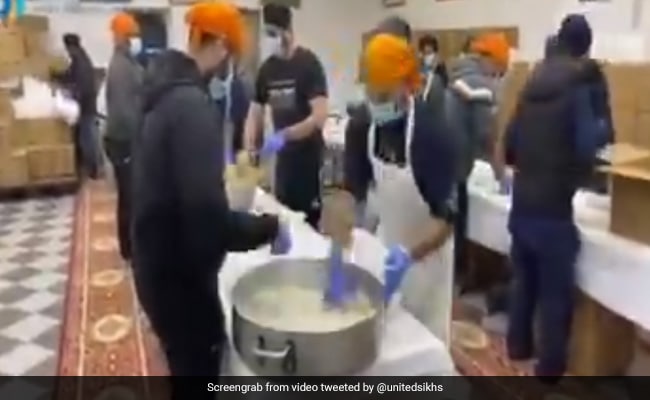 Several Sikh volunteers of the US are ready with an infrastructure to help agencies across the country.

The Sikh Center of New York prepared and packaged more than 30,000 home-cooked meals for Americans in coronavirus self-isolation.

The Sikh community was approached by New York's Mayor office for food packages that were handed out to several distributing federal agencies in the area. Monday morning onwards the agencies will further distribute and deliver free food to COVID-19 affected people in New York City, one of the worst affected cities in the US by a coronavirus.

Strict food hygiene practices were observed while the food was prepared such as maintaining social distancing and using face masks and gloves.

Himat Singh, coordinator of the American Gurudwara Prabhandak Committee (east coast) told ANI: "The ''Sewa'' or service provided by the Sikh volunteers is a vegetarian meal comprising of dry fruits, rice, and lentils."

"The meals were prepared on Sunday and were packaged and loaded for delivery. The distribution starts on Monday in the morning, by local authorities. Volunteers who prepared and packaged the meal had a medical check and have been approved by physicians and health authorities," Himat Singh added.

The distributing agencies will provide the food packages to the elderly or people having trouble getting food at the supermarket, specially-abled, homeless and single parents who are looking after their kids and can't go out, he further added.

Food items that have been previously donated to the Gurudwara are being used for this initiative and even the Gurudwara funds are being used. United Sikhs, an NGO based across the United States, also made an appeal to people from all walks of life to donate generously.

99 per cent of the people using the meals are Americans, the only Indians are those coming from overseas or students who are isolating for 14 days.

Several Sikh volunteers from the East, West Coast, and the Mid West of the United States are ready with an infrastructure to help agencies across the country. They are geared with free food, shelter at Gurudwara''s and even delivering essentials and medicines for the homeless and needy.

"Once we heard people were having a problem with food when they go shopping, they can't find food in the shopping centre, then we started reaching out to people in our personal capacity in the Bay Area (San Francisco)," Dr Pritpal Singh, coordinator of the American Gurudwara Prabhandak Committee (west coast) told ANI.

He also said that they have seen firsthand it was mostly the elderly who needed their service and it's most vulnerable people who are worried about the virus.

The Sikh volunteers applauded the efforts of the federal agencies who have been working round the clock to combat the crisis and also appealed to follow the advisories sent out by the city, state and federal agencies.

Jathedar Harpreet Singh, Sri Akal Takht Sahib and the spiritual leader of the Sikh community told ANI that he appeals to the Sikh community and there is a need to spring into action as the pandemic crisis deepened in the world in the past few weeks.

"We have requested gurudwaras across the country and the world to especially reach out to the stranded Indian students and provide them meals and shelter, which will give relief to many worried parents back in India," Jathedar Harpreet Singh said.