She Lost Her Father To Suicide. She Hopes A Billboard Can Help Save Others

She also bought a full-page advertisement in a local newspaper that will display her original message this fall, she said. 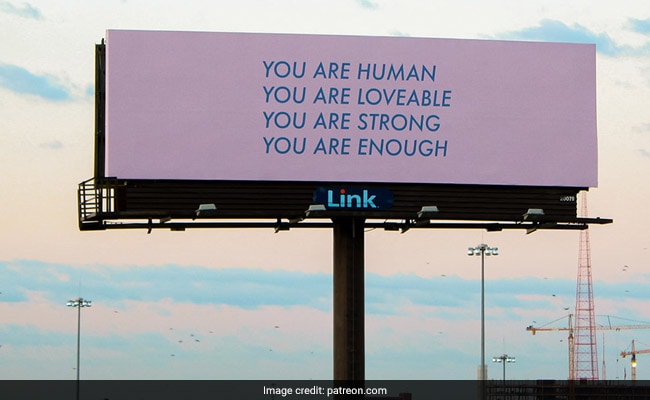 The "affirmation billboard" went up July 22 and will remain until mid-August.

Her father's suicide interrupted all the normal 17-year-old things. The night it happened, Nicole Leth had been worried about who would be her homecoming date, what grade she would get in Algebra 2 and whether her high school would win its football game.

Then, in an instant, her worries shifted to how she would go on without her best friend and protector.

Losing her dad, Richard, in October 2010 was "heart-shattering," Leth, who is from Kansas City, Missouri, said Wednesday in an email. But it also gave her a sense of purpose: to use every word she wrote and piece of art she created to try to save others.

That attempt to change someone else's path now takes an unlikely form: a pink billboard on U.S. Highway 71 in Kansas City with the message: "YOU ARE HUMAN. YOU ARE LOVEABLE. YOU ARE STRONG. YOU ARE ENOUGH."

"I had been noticing a lot of people hurting in the world, anxiety at an all time high and compassion at an all-time low," said Leth, 26. "I felt powerless in the face of it. But then I remembered 17-year-old Nicole bravely vowing to get down in the mud and fight to make beauty in the face of hardship."

The "affirmation billboard" went up July 22 and will remain until mid-August, Leth said. She said she saved money from her job as a yoga teacher for a few months to pay for the display, which cost her $1,200.

Leth doesn't want this billboard to be her last. She hopes to raise money to lease a billboard somewhere in her city each month for the next year, especially in higher-traffic areas. Leth has set up a fundraising page to defray the costs.

She's already brainstorming messages she might put on her next billboards: "Your heartbreaks don't define you. You define you." "You are bigger than the things that make you feel small." And "I believe in you. Will you believe in you?"

Leth also bought a full-page advertisement in a local newspaper that will display her original message this fall, she said.

Leth's advocacy comes at a crucial time. More than 47,000 Americans died by suicide in 2017, according to the American Foundation for Suicide Prevention. The national suicide rate has been rising over the past decade, making suicide the nation's 10th leading cause of death.

Since her father's death nine years ago, Leth said she has realized that although she can't single-handedly keep someone from ending their own life, she can try to help empower them to save themselves.

"I'm fighting for a ripple effect of good to bring softness to things that feel unbearable sometimes," Leth said.

A photo of Leth's billboard was shared on Facebook more than 3,600 times in the three days after it was posted. Hundreds of comments expressed gratitude.

"Thank you for doing this. I lost my son 3 months ago," one commenter wrote. "They can't hear these affirming words enough or in too many places."

"I lost my father to suicide 18 years ago when I was 19 years old," another person commented. "I love what you are doing and I can't thank you enough."

The idea for the billboard had been in the works for years while Leth studied how art can affect healing, she said. She learned that asking for help was often one of the hardest parts of the process, and she started writing affirmations on stickers that she would leave in public places, like coffee shops or park benches, or give to strangers.

Leth wrote the words that she needed to hear when she was struggling: "Staying soft means choosing to rebuild in the face of loss."

She wrote the things she wanted to tell her friends with broken hearts: "You are more than the people who didn't know how to love you."

And she wrote the messages she wished she could have told her dad: "You can get through anything."

Eventually, Leth said, people started asking her for the stickers so often that she began to send stacks of them to friends, who would distribute them to other friends. She wrote messages that could carry several meanings so people could take from them whatever they needed to get through the day.

To anyone struggling with suicidal thoughts, Leth wants to say: "I want you to be here and I think you are important - and that (you) are enough. No matter what your lowest low was like or no matter what happened today, I'm not giving up on you."