Joyce, 50, whose National Party rules alongside Turnbull's Liberals, admitted last week to having an affair with his 33-year-old media adviser, who is pregnant with their child. 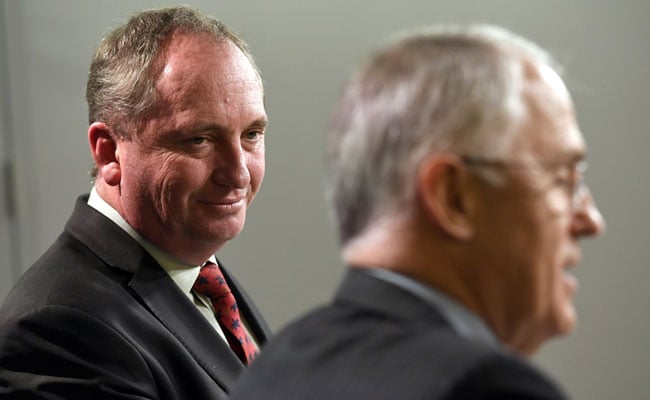 Barnaby Joyce admitted having an affair with his media adviser, who is pregnant with their child. (AFP)

Joyce, 50, whose National Party rules alongside Turnbull's Liberals, admitted last week to having an affair with his 33-year-old media adviser, who is pregnant with their child.

Turnbull on Thursday harshly admonished Joyce for making a "shocking error of judgement" for the affair and said he had created a "world of woe" for his wife, four daughters and lover Vikki Campion.

Turnbull, head of the Liberal Party, acknowledged that he was powerless to remove Joyce, who holds the deputy position as leader of smaller National Party on which he relies to govern.

He instead announced that a formal ban on sexual relations between cabinet members and their staff would be added to the ministerial code of conduct.

Joyce hit back in a defiant press conference in Canberra Friday, refusing to resign and accusing Turnbull of interfering with internal National Party affairs. He blasted the PM's comments as "inept", "unnecessary" and causing "further harm".

"I don't believe people should be resigning in any job over personal issues," Joyce added.

"In any workplace in Australia, when personal issues become the determination of a job, then I think we've moved to a very sad place," he said.

He also batted away revelations he accepted a rent-free apartment from a millionaire after his marriage collapsed, saying the accommodation was just a gesture of support from a friend.

Daily media headlines about the affair have riveted the public and sparked debate about workplace culture in Australia amid the global #MeToo movement against sexual harassment.

But it has also highlighted the perilous state of the coalition government, which just a few months ago survived a crisis over lawmakers' dual citizenship that threatened its wafer-thin parliamentary majority.

The Labor opposition has capitalised on the ructions, with leader Bill Shorten on Friday calling for Turnbull to sack Joyce.

"This government is in crisis. It is a full-blown political crisis," Shorten told reporters, adding that the spat showed neither man was "fit for the high office they currently hold".

The citizenship crisis had capped a decade of turmoil for Australian politics that saw a revolving door of prime ministers.

Labor's Kevin Rudd, who came to power in 2007, was ousted as prime minister by his deputy Julia Gillard, before snatching back the top job in 2013.

Promoted
Listen to the latest songs, only on JioSaavn.com
He lost the national election in the same year to the Liberals' Tony Abbott, who was then deposed by rival Turnbull in 2015.