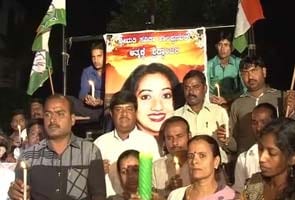 London: Praveen Halappanavar, husband of an Indian dentist who died due to pregnancy-related complications after being denied abortion in Ireland, says the medical notes made available to him do not contain their repeated pleas for a termination, but mention trivial requests for tea and toast.

"They have all the other information including requests for tea and toast and for an extra blanket, all of that is in the notes, but the important information about requesting the termination is not," Praveen, whose 31-year-old wife Savita died on October 28 at Galway University Hospital, said.

Praveen described how the missing information had destroyed his faith in the Irish Republic's Health and Safety Executive (HSE).

"It's time to get the facts and the truth for Savita," he was quoted as saying by Belfast Telegraph.

"I don't have any faith in the HSE. I saw (the files) earlier this week. It was a blow and that was the reason why we never wanted the HSE inquiry," said Praveen, who has been demanding a full public probe.

It has also emerged that a number of clinical notes were added to the file after Savita's death.

However, none of these refer to the termination request. Tony O'Brien, head of the HSE, has asked the patient safety watchdog, the Health Information and Quality Authority (HIQA), to begin a separate investigation.

Meanwhile, Irish President Michael D Higgins, who earlier said the probe into Savita's death must meet the needs of her family as also the State, defended his intervention in the row.

Higgins said he spoke out to express the great sadness felt in Ireland, but some felt he was sidestepping his obligation not to make political statements.

"I said it's very important that the investigation be such as satisfies the genuine concern of the Irish people and that helps reduce the grief for Savita's husband and her family."

Savita, who was 17-week pregnant when she died, had miscarried and subsequently suffered septicaemia.

Her husband says that doctors refused to carry out an abortion because a foetal heartbeat was present. He says they were told Ireland "is a Catholic country."

Irish Minister for Health James Reilly, meanwhile, said the likely announcement of a second State inquiry into the death of Savita is "an extra dimension, rather than a U-turn", The board of the Health Information and Quality Authority (HIQA) is expected to confirm shortly that it will undertake a statutory investigation into Savita's death, following a request from the HSE.

It was unclear whether Praveen, who says he will have nothing to do with the HSE inquiry, will cooperate with the investigation to be conducted by the authority, which is the State's health watchdog.

According to a report in The Irish Times, his solicitor Gerard O'Donnell last night said he was "not ruling out" participation in the HIQA inquiry. However, it was key for his client that it "sits in public, is open and witnesses are called".

Promoted
Listen to the latest songs, only on JioSaavn.com
The authority conducts its investigations in private and does not take statements under oath but is free to draw up its own terms of reference.