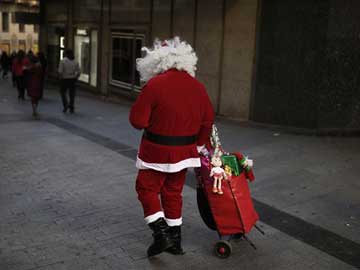 Four armed men dressed as Santa robbed a jewellery shop in a Tirana mall, police said Thursday while another "Santa gang" injured two people during a robbery in neighbouring Kosovo.

The four thieves, armed with automatic weapons, burst into the Tirana shop on Tuesday, threatening the owner at gunpoint as they filled sacks with luxury goods, Interior Ministry spokesman Florion Seriani told AFP.

Police found two automatic weapons in the trash can near the mall, believed to belong to the thieves.

And in neighbouring Kosovo on Thursday, two people were injured when three armed men dressed as Santa fled a jewellery shop after robbing it in the southern town Prizren, media in Tirana reported.

Promoted
Listen to the latest songs, only on JioSaavn.com
Kosovo police were not available for comment.