The fiercest fighting was near the towns of Bakhmut and Avdiivka, the region's governor Pavlo Kyrylenko said in a television interview. 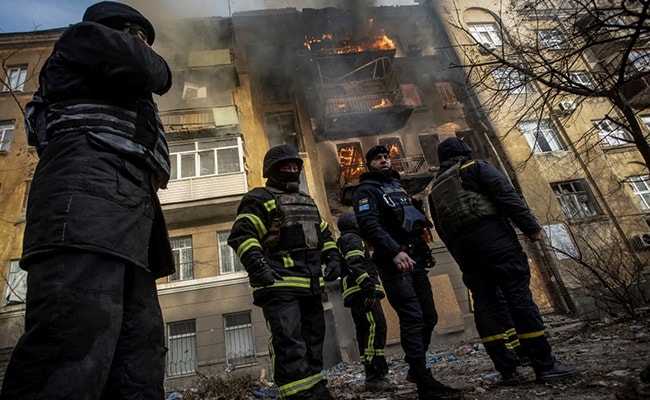 A Russian military strike leaves a residential building on fire in Donetsk, Ukraine.

Russian forces shelled the entire front line in the Donetsk region in eastern Ukraine on Thursday, Ukrainian officials said, part of what appeared to be the Kremlin's scaled-back ambition to secure only the bulk of lands it has claimed.

The fiercest fighting was near the towns of Bakhmut and Avdiivka, the region's governor Pavlo Kyrylenko said in a television interview. Artillery slammed into the town of Toretsk southwest of Bakhmut, killing one civilian and damaging 12 buildings, Kyrylenko said.

"The entire front line is being shelled," he said, adding that Russian troops were also trying to advance near Lyman, which was recaptured by Ukrainian forces in November, one of a number of setbacks suffered by Russia since invading its neighbour in February.

In Bakhmut and other parts of the Donetsk region that neighbours Luhansk province, Ukrainian forces countered with barrages from rocket launchers, a Reuters witness said.

Ukraine's military command said Russian artillery attacked civilian infrastructure in the towns of Kupiansk and Zolochiv in the northeastern region of Kharkiv, and Ochakiv in the Mykolaiv region. Ukrainian anti-aircraft units downed several of the missiles trained on Kharkiv region on Thursday evening, governor Oleh Synehubov said on a messaging app.

"The Russians have intensified their efforts in Donetsk and Luhansk," Ukrainian presidential adviser Oleksiy Arestovych said in a video post.

"They are now in a very active phase of attempting to conduct offensive operations. We are advancing nowhere but, rather, defending, destroying the enemy's infantry and equipment wherever it tries to advance."

Reuters was not able to verify battlefield reports.

In a reminder that, despite the hostilities, Russia maintains lines of communication with the West, the United States said Russia had freed U.S. basketball player Brittney Griner in return for the release of Russian arms dealer Viktor Bout.

The White House said the prisoner swap would not change its commitment to the people of Ukraine.

Separately, a U.S. citizen ordered deported by a Russian court over a domestic dispute left Russia late on Thursday.

The U.S. House of Representatives passed a defence bill on Thursday that provides Ukraine at least $800 million in additional security assistance next year.

In Rome, Pope Francis broke down and cried as he mentioned the suffering of Ukrainians during a traditional prayer.

"Immaculate Virgin, today I would have wanted to bring you the thanks of the Ukrainian people," he said before being overwhelmed by emotion and having to stop.

Francis, who was later able to continue speaking, has mentioned Ukraine in nearly all his appearances since the invasion and has grown increasingly critical of Russia.

President Vladimir Putin has given conflicting statements on the goals of the war but is now clear the aims include some expansion of Russia's borders, in contrast with comments at the beginning of the "special military operation", when he said Russia's plans did not include the occupation of Ukrainian land.

The Kremlin said on Thursday it was set on securing at least the bulk of the territories in east and south Ukraine that Moscow has declared part of Russia, but appeared to give up on seizing other territory in the west and northeast that Ukraine has recaptured.

Russia proclaimed in October that it had annexed four provinces, which it calls "new territories", shortly after holding so-called referendums that were rejected as bogus and illegal by Ukraine, the West and most countries at the United Nations.

While Russia made clear it wanted to take full control of Donetsk and Luhansk - two largely Russian-speaking regions collectively known as the Donbas - it left unclear how much of the regions of Zaporizhzhia and Kherson it was annexing.

Ukrainian President Volodymyr Zelensky says his troops will eventually drive Russia from all captured territory, including the Crimea peninsula annexed by Russia in 2014.

In the settlement of Posad-Pokrovske in the southern region of Kherson, retaken by Ukraine, some villagers have returned to homes damaged or reduced to rubble by Russian shells, set in a landscape of downed utility poles and spent munitions.

"This is perhaps even fiercer and more devious than missile terror," said Zelenksy.

"For there is no system against mines that could destroy at least part of the threat as our anti-aircraft systems do."

On Thursday, Russian naval forces shot down a Ukrainian drone over the Black Sea, according to the Russian-installed governor of Sevastopol, an important port and the largest city in Crimea.