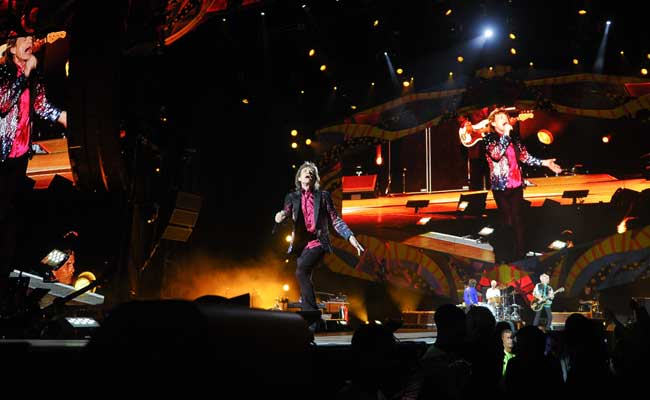 British singer and frontman of rock band The Rolling Stones Mick Jagger performs during a concert at Ciudad Deportiva in Havana, Cuba, on March 25, 2016. (AFP photo)

Havana, Cuba: Cubans had never seen the Rolling Stones before and after Mick Jagger rocked them in their hundreds of thousands in Havana, they and their communist island were unlikely ever to be quite the same again.

The massive crowd flowed across the Cuban capital's Ciudad Deportiva, a sports complex with a capacity of 450,000, the human tide spilling beyond into the streets. Fans even stood thick on neighboring rooftops to get a glimpse of history.

When fans raised their phones and cameras to get snapshots of Jagger strutting across the giant stage, the flashes looked like a new galaxy.

Kicking off Friday with "Jumpin' Jack Flash," as the sun set over Havana, this was the British superstars' first concert in Cuba.

But it was more: it was the first gig by any rock band that big, with a production featuring giant video screens and a sound system that got the crowd jumping, arms swaying, to classic after classic, from "Angie" to "Paint It Black."

And, because this was happening on an island seemingly frozen in time -- yet bursting with desire for change -- this was not only rock 'n roll.

Friday's free concert turned history on its head, in a country where just a few decades ago all rock music was considered part of an enemy plot against the communist state.

"We know that years ago it was difficult to hear our music in Cuba, but here we are playing," Jagger said in Spanish, prompting huge cheers.

"I think that finally the times are changing. That's true, isn't it?"

The crowd erupted during songs like "Out of Control" and "Satisfaction," with people of all ages singing along to the choruses and hopping up and down in rhythm to thunderous guitar solos.

"It's so amazing that they came to Cuba and united such a variety of people, young and old," said Andres Enda, 24, a dancer.

"Change is already coming -- the fact they're here shows that."

The twin events added up to a tumultuous week for Cuba, run by Fidel Castro and now his brother Raul ever since their guerrilla army deposed a hated, US-backed regime in 1959.

Although Jagger's comment about changing times was his only overtly political statement, the whole concert seemed like a massive declaration by Cubans that they want to join the world.

Between the 1960s and 1990s, rock 'n roll was discouraged to varying degrees in Cuba, leading during the most repressive years to clandestine listening sessions and an underground trade in smuggled recordings.

Those restrictions have gone, but the ban on political and media freedoms has not, while the ramshackle communist economy and decades-old US economic embargo have forced many into lives of stiflingly few opportunities.

The crowd danced, swayed and for one long spell joined Jagger, 72, in intense back-and-forth singing, seemingly sending a message that the time has come to move on.

Cuba's state news blog www.cubadebate.cu made the concert its top story Saturday, but didn't mention the call for change, instead focusing on Jagger's charm and how he told the crowd they were "cool."

But there was no way to keep a lid on such an event.

"People will be talking about this for the next two weeks," student Fernandez de Cossio said.

The Stones' show was among the most ambitious ever staged in Cuba, requiring 61 sea containers and a packed Boeing 747 filled with gear and equipment.

It was not clear whether many more big bands would be coming soon, however.

The island woefully lacks infrastructure, remains under the US embargo and most Cubans are in any case too poor to pay regular concert ticket prices.

Cuban police were out in large numbers, but remained discreetly to the sides during the concert. Many fans ignored an alcohol ban, bringing in bottles of rum, as well as puffing on fat Cuban cigars.

While the Stones' technical teams were operating state-of-the-art light and sound systems, the Cuban contribution was tellingly basic.

As nearly everywhere else in Cuba, there was no wifi signal at the sports complex, and as soon as the crowds grew, cellphones went dead. Metal cabins positioned over ordinary street drains served as public toilets.

After the show, the group tweeted: "Thank you Cuba for an incredible, unforgettable show! It was wonderful to see all of you!" -- a message also sent in Spanish -- with the hashtag #StonesCuba.

But few in Cuba, where Internet is not widely available, would have been able to even see Twitter.