The 12 boys, aged between 11 and 16, and their 25-year-old assistant coach, went missing on Saturday after their soccer practice. 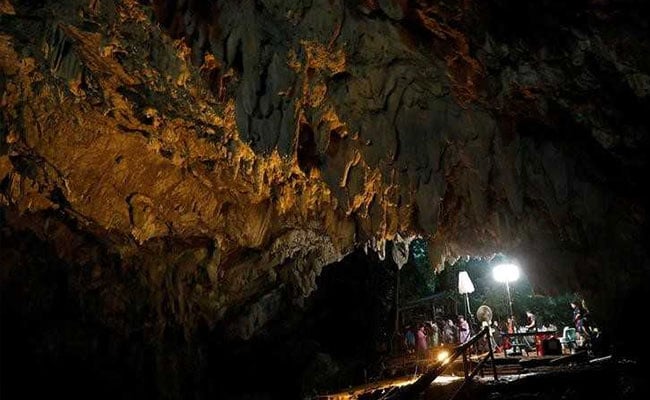 Thai volunteers and military teams, including a navy SEAL unit, struggled through flood waters inside a cave on Wednesday in a search for a team of school boy soccer players missing since they set out to explore the complex on the weekend.

Rescue workers took turns pumping water from inside Tham Luang cave complex, which runs 10 km (6 miles) under a mountain in the northern province of Chiang Rai, but persistent heavy rain was compounding the difficulties.

"Last night, we worked non-stop in order to drain water out of the cave as much as possible," Major Buncha Duriyapan, commander of the 37th Military District in Chiang Rai, told Reuters.

The 12 boys, aged between 11 and 16, and their 25-year-old assistant coach, went missing on Saturday after soccer practice.

They planned to explore the cave, even though it is known to be prone to flooding in the rainy season, and had taken flashlights and some food, according to messages they exchanged.

But nothing has been heard of them and no sign found, apart from some footprints and marks left by their muddy hands near the cave entrance.

The search has dominated the news in Thailand since the 13 were confirmed as missing late on Saturday and increasingly distraught relatives and friends have been gathering in the mud and rain at the mouth of the cave.

"I hope to have good news soon," he told reporters in Bangkok.

Chiang Rai Governor Narongsak Osottanakorn said rescue workers have identified three chimneys, or shafts, rising up from the roof of the cave to the open air on the mountain above and rescuers hoped to descend through one of them.

"We are planning to rappel down one but the opening is narrow," Narongsak said.

"Water is the biggest challenge. There is a lot of debris and sand that gets stuck while pumping," Kresada told Reuters.

"We have to switch out units because there is not enough air in there," he added, before heading back into the cave.

A guide book to the caves of northern Thailand describes the Tham Luang cave as having an "impressive entrance chamber" leading to a marked path. It then describes the end of the path and the start of a series of chambers and boulders.

"This section of the cave has not been thoroughly explored. After a couple of hundred metres the cave reduces in size to a mud floored passage 2 m wide and 3 m high," writes Martin Ellis, author of 'The Caves of Thailand Volume 2'.

Vern Unsworth, a British cave explorer based in Chiang Rai who has joined the search, said a lot of water was seeping into the cave from two directions.

"There is a watershed inside, which is unusual, it means there is water coming in from two directions," Unsworth told Reuters.

"The biggest challenge is the water. Massive amounts."Nopparat Kantawong, the head coach of the team who did not attend practice on Saturday, said he was hopeful that the boys would stay strong and pull through.

"They won't abandon each other," Nopparat told reporters.

The boys had visited the cave several times before, he said.