Cribbing the tune from pop song Jealous - or Ghen in Vietnamese - by singers Erik and Min, the Ministry of Health released an animated video with lyrics telling its citizens to ''push back the virus Corona, Corona.'' 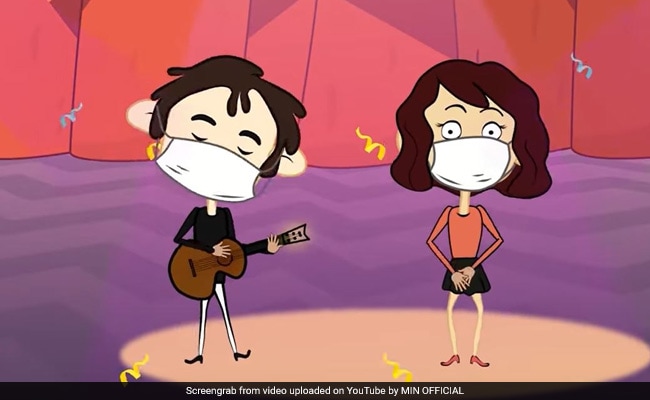 A home-made animated video featuring a catchy Vietnamese song spreading awareness about precautionary measures to fend-off the deadly coronavirus outbreak has taken over the internet with by storm.

Cribbing the tune from pop song Jealous - or Ghen in Vietnamese - by singers Erik and Min, the Ministry of Health released an animated video with lyrics telling its citizens to ''push back the virus Corona, Corona.'' The song is also available on YouTube, titled, ''Trung tam Thanh thieu nien mien Nam - SYC''.

Meanwhile, devising a unique way, a Vietnamese dancer also choreographed the song into a hand-washing dance with proper signs symbolic of safety measures to ward-off the viral infection that has killed more than 3200 people globally.

"I am so happy that my dance spread the world," gushed Ho Chi Minh City's Quang Dang on Instagram yesterday.

In the video, uploaded last month, a yellow-shirt-wearing Dang and a matching buddy can be seen grooving in unison to a tune based on Vietnamese pop hit "Ghen."

The two boys can be seen urging the public to "push the coronavirus away" by refraining from "rubbing one''s nose, mouth and eyes, limiting visits to public places," and, of course, washing one''s hands thoroughly.

Appreciating Dang's efforts, the United Nations Children''s Fund (UNICEF) tweeted, "We love this handwashing dance from Vietnamese dancer, Quang Dang. Washing your hands with soap and water is one of the first steps to protect yourself from #coronavirus."

Amid the rapid spread of the coronavirus outbreak around the world, Vietnam has announced that all 16 infected patients, including the oldest who is 73, in the country were discharged from hospital and declared cured.

For the past 15 days, including on Friday, the government also detected no new cases of infections, the last one having been reported on February 13, even as a village north of Hanoi remains under a 20-day lockdown.

The virus which originated from the central Chinese city of Wuhan last year has infected more than 83,000 as of Saturday.

World Health Organization (WHO) officials and health experts said the government''s swift response to the emergency was crucial in containing the crisis at the early stage.