Since the start of Vladimir Putin's second term, a construction boom has been underway at more than two dozen institutes that were once part of the Soviet Union's biological and chemical weapons establishment. 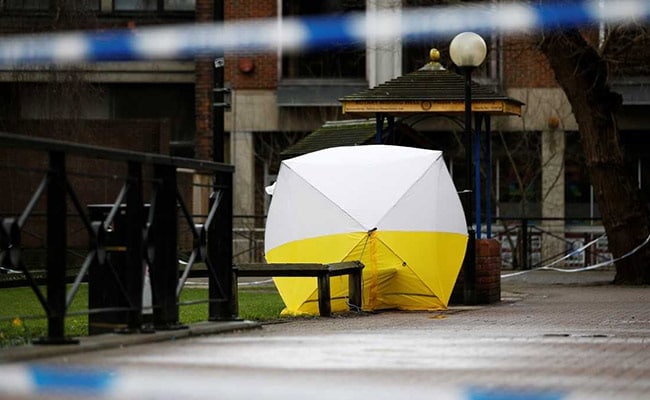 The poisoning in the English city of Salisbury on March 4 has led to a diplomatic crisis. (File)

During his last run for the presidency in 2012, Russian leader Vladimir Putin startled U.S. military experts with a mysterious pledge to develop novel kinds of weapons to counter the West's technological edge. Armies of the future, he said, would need weapons "based on new physical principles" including "genetic" and "psychophysical" science.

"Such high-tech weapons systems will be comparable in effect to nuclear weapons," Putin said in an essay published in Rossiyskaya Gazeta, the Russian government's newspaper of record, "but will be more 'acceptable' in terms of political and military ideology."

Exactly what Putin meant - and how any "genetic" weapon could square with international treaties outlawing chemical and biological warfare - remains uncertain. But what is now clear is that Putin's words unleashed a wave of activity across a complex of heavily guarded military and civilian laboratories in Russia.

Since the start of Putin's second term, a construction boom has been underway at more than two dozen institutes that were once part of the Soviet Union's biological and chemical weapons establishment, according to Russian documents and photos compiled by independent researchers. That expansion, which includes multiple new testing facilities, is particularly apparent at secret Ministry of Defense laboratories that have long drawn suspicions from U.S. officials over possible arms-treaty violations.

Russian officials insist that the research in government-run labs is purely defensive and perfectly legal. But the effort has come under increased scrutiny in the wake of allegations of Moscow's involvement in the poisoning of a former Russian spy and his daughter in Britain. Both were sickened by exposure to Novichok, a kind of highly lethal nerve agent uniquely developed by Russian military scientists years ago.

"The big question is, why are they doing this?" said Raymond Zilinskas, a chemical and biological weapons expert with the James Martin Center for Nonproliferation Studies in Monterey, California. In a newly released book, "Biosecurity in Putin's Russia," Zilinskas and co-author Philippe Mauger analyze hundreds of contract documents and other records that show a surge in Russian research interest in subjects ranging from genetically modified pathogens to nonlethal chemical weapons used for crowd control.

The analysis also tracks a simultaneous rise in sensationalist Russian claims that the United States is itself pursuing offensive biological weapons. Reports posted on state-sponsored news sites and amplified over social media have accused U.S. scientists of being behind recent outbreaks of the Zika virus as well as the Ebola epidemic in West Africa that began in 2014. In each instance, various U.S. federal agencies marshaled a sizable response to counter or contain the outbreaks.

Such baseless claims could be viewed as part of a deliberate effort to "explain to their own people why they need to do this research," Zilinskas said in an interview.

A spokesman for Russia's Ministry of Foreign Affairs declined to answer written questions but forwarded a March 13 statement by Vassily A. Nebenzia, Russia's ambassador to the United Nations. Nebenzia denied any involvement by the Kremlin in the March 4 nerve-agent attack and suggested that it was the United States and Britain, not Russia, that were continuing to conduct illegal research to create "new toxic substances."

The research by Zilinskas and Maugerappears to bear out long-held concerns by the State Department, which has sharply criticized Russia in recent years over a lack of transparency in its military-related biological and chemical research. Since 2012, State Department officials have issued a series of reports faulting Moscow for refusing to open its military research laboratories to outside inspectors, and for failing to provide proof that it completely destroyed the highly lethal arsenals created by Red Army scientists in the years before the Soviet Union's collapse.

Thomas Countryman, an assistant secretary of state for international security and arms control under the Obama administration, said that even before Putin, U.S. officials questioned whether the Kremlin had owned up to its past "fully and transparently." But over the past six years, official distrust has grown as Moscow has embraced a more aggressive foreign policy that includes intimidation of Russia's neighbors and an unabashed support for a Syrian dictator who uses nerve agents to kill his own people.

"Moscow's full-throated defense of Syrian use of chemical weapons - and, especially, its apparent use of chemical agents in targeted assassinations - only add to the concerns," Countryman said.

When the Soviet Union was dismantled in 1991, the Russian Federation became instant heirs to history's most dangerous arsenal of chemical and biological weapons.

During the Cold War, Soviet leaders spent vast sums to create weaponized versions of 11 different pathogens - including the microbes that cause anthrax, smallpox and the plague - while also experimenting with genetically altered strains. They created new classes of chemical toxins, such as Novichok, reportedly used in the attempted assassination of former Russian spy Sergei Skripal and his daughter, Yulia, in Salisbury, England.

A fourth-generation nerve agent more deadly than VX, Novichok is the stuff of legend; Russia denies that it ever researched or manufactured such nerve agents, but it arrested a former Soviet weapons scientist on charges of divulging state secrets after he published details about Soviet Novichok production in newspaper articles and a memoir.

The Soviet program was motivated in part by competition with the United States. Washington maintained its own stockpile of nerve agents during the Cold War and manufactured biological weapons until 1969, when President Richard M. Nixon dismantled the program. But the Kremlin pressed ahead, convinced that the Pentagon was continuing bioweapons research in secret. Finally, in 1992, newly installed Russian President Boris Yeltsin acknowledged the existence of the secret program to U.S. officials and reported that all Soviet bioweapons had been destroyed.

In the years immediately following the Cold War, securing and dismantling Soviet weapons of mass destruction united Americans and Russians in common cause. The United States helped Russia build incinerators for destroying its chemical weapons, and sponsored programs that paired former Soviet bioweapons scientists with Western companies to keep them employed during the country's economic transition.

Such U.S.-Russian technical cooperation began to wane following Putin's election as president, and collapsed completely after the Russian strongman won a second term in 2012. Yet, even during the Yeltsin years, Russia refused to grant access to key weapons sites, including four biodefense laboratories run by the Russian military and perpetually sealed off from outside visitors, former U.S. officials said.

"We were always curious: Were they embarrassed to let us in because of the shape of their labs? Or were they hiding something?" said Laura Holgate, a senior adviser to President Barack Obama on preventing biological, chemical and nuclear terrorism.

Holgate allowed that Russia's reluctance also may have reflected a "paranoia about what the U.S. might be learning" about the country's military capabilities. In any case, she said, it became clear over time that Putin intended to preserve some Soviet-era capabilities for use in very specific situations. One of these was assassination - the killing of the Kremlin's opponents using methods that were dramatic, yet allowed Moscow to plausibly deny culpability. Another was crowd control: the use of controversial "knockout" chemicals to incapacitate individuals involved in hostage standoffs and other mass disturbances.

Officials familiar with Russia's program said the expanded activity at military labs may be partly aimed at honing those capabilities, giving Putin a variety of tools for dealing with adversaries while seeking to avoid the most flagrant violations of Russia's treaty obligations.

"That would be in line with behavior that we've been seeing for years," Holgate said.

Whatever the explanation, the buildup is striking. Data collected by Zilinskas and Mauger includes contract documents, Russian-language reports and aerial imagery that shed light on a dramatic expansion at the four secret Ministry of Defense laboratories and numerous government-run civilian research centers across the country.

At one military complex at Yekaterinburg - the scene of an accidental release of anthrax spores in 1979 that is said to have killed 100 workers and townspeople - satellite images show clusters of newly built, warehouse-size industrial buildings dotting a walled campus. Renovations can be observed in older buildings that in Soviet times were factories for mass-producing bacillus anthracis, the bacteria that causes anthrax.

At the 33rd Central Research Test Institute at Shikhany - formerly a "closed" Russian military city on the Volga River in southwest Russia - records point to a recent spending spree for specialized equipment such freeze-drying machines used in microbial production. Lab officials are shown soliciting bids for repairs to a wind tunnel, the type used in testing aerosolized bacteria and viruses, as well as upgrades to an area of bermed storage pens that the researchers say are likely intended for open-air testing involving explosives.

Wind tunnels and outdoor testing facilities can be used legitimately to develop defenses against biological and chemical attacks. Indeed, the Pentagon employs similar equipment at its biodefense research facilities in Maryland and Utah. But Zilinkas and Mauger say the Russian expansion invites a higher level of scrutiny in light of the explicit calls by Russian leaders for work on novel kinds of weapons, including "genetic" ones.

"We noted the numerous high-level calls for the development of biotechnology-based weapons in Russia, without further specification," Zilinskas and Mauger write. At minimum, the vagueness of such statements potentially opens the door for any military official or "ambitious scientist" to lobby for a chance to develop a new kind of weapon - with the implicit blessing of top Russian officials, they write.

"When taken in conjunction with the [military]'s apparent support for the development of 'genetic' weapons, these statements erode normative barriers toward biological weapons in Russia," the authors say.

(This story has not been edited by NDTV staff and is auto-generated from a syndicated feed.)
Comments
Vladimir PutinEx-Russian SpySergei Skripal