Protests will also be outlawed in much of the southern city of Nice, where Chinese President Xi Jinping will meet his French counterpart Emmanuel Macron on Sunday. 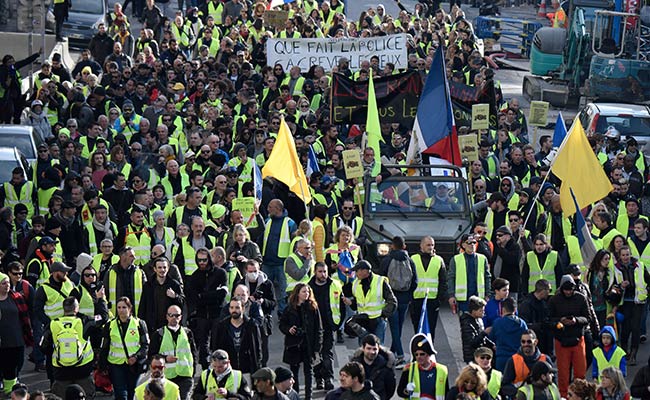 Paris police said Friday that "yellow vest" protests would be banned on the Champs-Elysees on Saturday, a week after hundreds of anti-government demonstrators rioted and looted shops on the iconic Paris avenue.

Protesters will also be stopped from entering streets surrounding the Arc de Triomphe, at the top of the avenue, as well as several nearby areas, including the presidential Elysee Palace and the National Assembly, the Paris prefect's office said.

"There are serious reasons to believe that violence and damages are likely during the scheduled demonstrations," the office said.

Similar bans were planned in other major cities, including Toulouse, in southwestern France, where officials said the main city square will be out of bounds for demonstrators.

Protests will also be outlawed in much of the southern city of Nice, where Chinese President Xi Jinping will meet his French counterpart Emmanuel Macron on Sunday.

The Paris prefect's office said anyone defying the bans would face fines, part of tough new measures vowed by the government to prevent another flare-up of violence.

In other areas of Paris, "the right to demonstrate, which is a fundamental freedom, will be allowed", but "any riotous groups will be immediately dispersed," police warned.

Last Saturday, police appeared to hang back as hundreds of violent protesters rampaged along the Champs-Elysees, burning and looting more than 100 businesses in unrest that cost the Paris police chief his job.

The weekly Saturday protests began on November 17 over fuel tax increases and quickly ballooned into an anti-government rebellion against Macron's policies, seen by the protesters as geared towards the rich.

Although several of the initial protests ended in rioting, the clashes with police had eased as participation dwindled in recent weeks.

Destruction of property is estimated to have cost 200 million euros ($227 million) so far over the 18 weeks of protests, according to Economy Minister Bruno Le Maire.