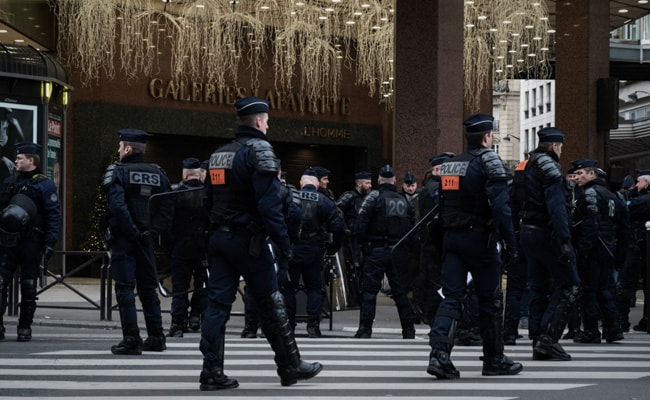 French "yellow vest" demonstrators occupied a top Parisian department store on Sunday, a day after clashes in the capital on the first anniversary of the protest movement.

The glitzy Galeries Lafayette store in the Opera shopping district was evacuated after dozens of protesters chanting anti-capitalist and anti-government slogans took over the third floor.

"(President Emmanuel) Macron is destroying France and your rights, don't criticise us" We're here for you," one placard read.

The protest came on a second day of demonstrations to mark the anniversary of a leaderless revolt that badly rattled President Emmanuel Macron's centrist government.

Twenty people were arrested Sunday in Paris but in most places the protests were peaceful.

On Saturday, police in Paris had battled rioters for hours around the southeastern Place d'Italie square, where a yellow vest march was shut down by the authorities after turning violent.

Several cars were overturned or set alight, bus shelters were smashed and a monument to a World War II hero Marshal Alphonse Juin was defaced by demonstrators dressed in black, who wore masks to hide their faces.

Police checked thousands of demonstrators over the weekend. On Sunday, prosecutors said 169 were held in custody including eight minors.

Castaner claimed that there were "few demonstrators" among at the protesters in Paris, who he said were mainly "thugs, brutes who came to fight the security forces and prevent the emergency services from doing their work".

But leftist TV historian Mathilde Larrere wrote on Twitter that she and two friends were prevented from leaving the protest after the clashes began because of police crowd control tactics.

She accused the police of tactics "unworthy of a democratic state", citing "the repeated teargassing and (stun) grenades going off everywhere".

In rural France, by contrast, the mood of the anniversary was more festive. Many yellow vests returned to the traffic roundabouts they occupied last year when they began rebelling against Macron's economic policies.

But at the town of Le Pont-de-Beauvoisin in the southeast Savoie region, around 60 people paid tribute to a yellow vest protester who died a year ago. Chantal Mazet was knocked over by a car at a roundabout on the first day of the protests.

The interior ministry put the number of demonstrators on Saturday at 28,600 nationwide but the organisers said nearly 40,000 people had rallied -- a far cry from the estimated 282,000 who took part in the first big day of protests on November 17, 2018.

The yellow vests, who accuse Macron of ruling on behalf of the urban elite -- the spark for the protests was a series of fuel price hikes that squeezed car-dependent rural-dwellers -- are adamant that they have not gone away.

They are now looking to join forces with the trade union movement, which is planning a major transport strike over pension reforms starting on December 5.