Tight security surrounded the start of the trial of the 28-year-old, who was transferred overnight from a jail near the French capital Paris and arriving in Belgium in a convoy of police vehicles. 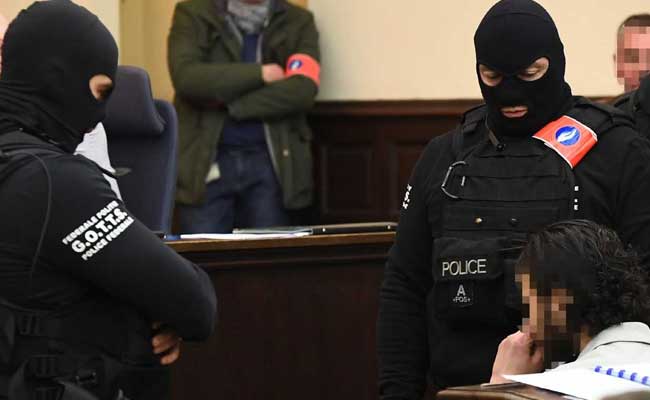 Salah Abdeslam, refused to answer questions on Monday, as he went on trial in Brussels. (AFP)

Brussels, Belgium: The only surviving suspect in the 2015 Paris attacks, Salah Abdeslam, refused to answer questions on Monday as he went on trial in Brussels over a bloody shootout with police that led to his capture.

Tight security surrounded the start of the trial of the 28-year-old, who was transferred overnight from a jail near the French capital Paris and arriving in Belgium in a convoy of police vehicles.

Abdeslam, who has declined to to speak to investigators since his arrest in March 2016, immediately signalled his defiance on Monday by refusing to stand when asked by the judge and saying he would not cooperate.

"I do not wish to answer any questions," Abdeslam, bearded and wearing a long-sleeved white polo shirt, said when the presiding judge, Marie-France Keutgen, asked him to confirm his identity.

The judge told the court that Abdeslam has also refused to have photos or video taken of him during the four-day trial in Brussels.

The Belgian-born French national of Moroccan descent faces charges of attempted terrorist murder of police officers and carrying banned weapons over a gunbattle in the Forest district of Brussels on March 15, 2016.

Three police officers were wounded and a jihadist was killed in the fight, which came as Abdeslam was on the run four months after the Paris attacks. He was captured three days later.

Abdeslam and the man arrested with him, Tunisian national Sofiane Ayari, 24, could serve up to 40 years in prison if convicted.

Hundreds of Belgian security forces turned the Palais de Justice court building in Brussels into a virtual fortress while a helicopter with searchlights circled overhead as he arrived.

"This must remain an ordinary trial," said the official who presides over the court, Luc Hennart. "If there is the slightest problem I will order the courtroom to be evacuated."

The non-jury trial is the prelude to a later one in France and prosecutors hope the Brussels trial will yield clues not only about the attacks that killed 130 people in Paris but also the suicide bombings months later in Brussels.

Abdeslam has refused point-blank to speak to investigators throughout the nearly two years since his arrest, which capped a four-month hunt for Europe's most wanted man.

But he has insisted on attending the Brussels trial, where three judges are to lead proceedings for four days, which had raised hopes, now apparently dashed, that he would use it to break his silence.

Hennart insisted that the trial would only focus on the shootout, saying: "That is what we will talk about, we will not talk about either the Brussels or Paris attacks."

The plans for transferring Abdeslam from Fleury-Merogis prison in the Parisian suburbs, and then back to a prison just across the border in northern France every night, were shrouded in secrecy.

Two separate convoys left Fleury-Merogis in the middle of the night with an escort of elite French officers with blue lights flashing, while a third group of unmarked vehicles left shortly afterwards.

The boyish former bar owner has spent nearly 20 months in isolation under 24-hour video surveillance at Fleury-Merogis, after being transferred to France after his arrest.

At the Brussels court journalists and officials all had to pass through security checks. A police sniffer dog checked the austere courtroom itself, into which journalists were banned from taking phones and computers.

Shot in the leg

Investigators believe Abdeslam's capture three days after the shootout caused members of his jihadist cell to bring forward plans for the attacks in Brussels.

Suicide attacks on March 22, 2016, killed 32 people at Brussels airport and a metro station near the EU headquarters.

The same cell is believed to have been behind both the Paris and Brussels attacks, which were claimed by the ISIS group.

Police say Abdeslam and Ayari were holed up at the Forest flat when it was raided by French and Belgian police in a routine operation after the Paris attacks.

A third suspect, 33-year-old Algerian Mohamed Belkaid, died while providing covering fire for their escape through a back door.

Police say they found Abdeslam's fingerprints in the flat, confirming they were on the trail of the last suspect in the rifle and bomb attacks on the Bataclan concert hall, bars, restaurants and the national stadium in the French capital on November 13, 2015.

Promoted
Listen to the latest songs, only on JioSaavn.com
Abdeslam is reported to have disposed of a suicide belt before fleeing. He is also suspected of being the driver in the attacks, in which his brother Brahim was one of the suicide bombers.

Armed officers shot in the leg and captured him and Ayari just yards from Abdeslam's home in Molenbeek, a gritty Brussels immigrant neighbourhood.