Over 100 Killed In Boeing 737 Crash In Cuba, 3 Survivors Pulled Out

Cuban television said the crash was about 12 miles south of Havana near the villages of Santiago de las Vegas and Boyeros. 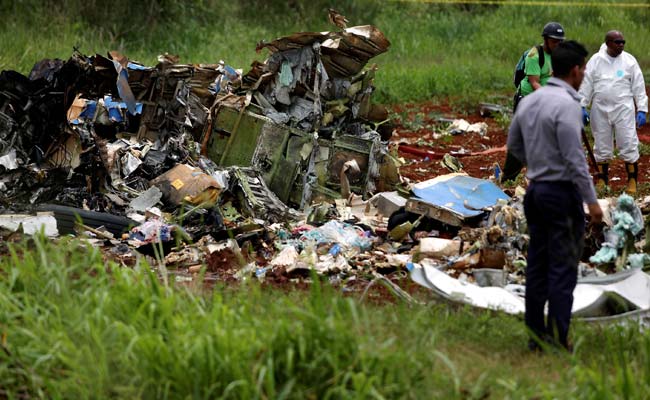 The Mexican ministry confirmed that the crashed plane was 38 years old. (Reuters)

An aging airliner crashed Friday shortly after takeoff on a domestic flight in Cuba, officials and Cuban news media reported, leaving more than 100 people dead in an accident that highlighted the precarious state of the country's commercial aircraft fleet.

The plane, a Boeing 737-200 leased by state airline Cubana de Aviacion from a small Mexican carrier and operated by a Mexican crew, went down in a field within a couple of miles of Havana's Jose Martí International Airport. There were conflicting accounts of the exact number of people on board; Cuban media reported that as many as 105 passengers were listed, plus up to nine foreign crew members.

The Cuban state-run newspaper Granma did not immediately provide a death toll but said that only three people survived the crash, which occurred at 12:08 Eastern time. It said the three were rushed to a hospital in critical condition.

Cuban television reported that all three of the survivors were women. It said five children were among the passengers, including an infant under 2 years old.

There was no immediate information on the cause of the crash.

The plane, designated as Flight 972 and bound for Holguin in the eastern part of Cuba, belonged to Mexico's Global Air and had at least six Mexican crew members on board, an airline official told the Associated Press. The Mexican Ministry of Communications and Transportation identified the cockpit crew members as Captain Jorge Luis Nunez Santos and First Officer Miguel Angel Arreola Ramírez, both Mexicans.

Boeing's 737-200 first entered service in the United States in 1968 and was last manufactured 30 years ago.

The Mexican ministry confirmed Friday that the crashed plane was 38 years old.

A history of the ill-fated aircraft indicated that it had changed hands at least 15 times, beginning its career in 1979 with Piedmont Airlines. It was later flown by airlines in Canada, Chile, Cameroon, Benin and the Caribbean, in addition to an earlier stint in Mexico. For almost five years, it was flown by the U.S. Navy.

Images posted on social media from inside the airport terminal showed gray smoke rising in the distance from the crash site minutes after the plane went down.
Cuban's newly appointed president, Miguel Diaz-Canel, and other government officials rushed to the site, along with emergency medical workers and ambulances. Photos from the scene showed Diaz-Canel inspecting the wreckage, surrounded by firefighters, rescue workers, soldiers and officials.
The president said a commission would be formed to investigate the cause of the crash. He said there was no damage to homes in the area or casualties on the ground, and he thanked local residents for racing to the scene to help first responders.
Cuban television said the crash was about 12 miles south of Havana near the villages of Santiago de las Vegas and Boyeros.

The plane came down in a cassava field and appeared heavily damaged and burned, the AP reported. Firefighters sprayed water on its smoldering remains.

The news agency said residents of the rural area reported seeing some survivors being taken away in ambulances. 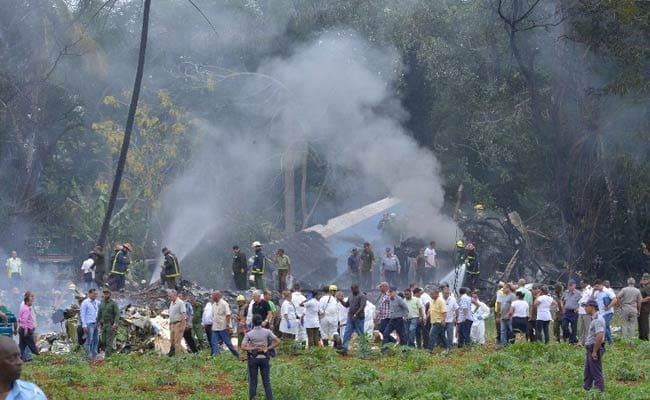 The Boeing 737 was a domestic flight going to Holguin, carrying 104 passengers.

"We heard an explosion and then saw a big cloud of smoke go up," said Gilberto Menendez, who runs a restaurant in Boyeros, Reuters news agency reported.

A worker at Havana's Calixto Garcia Hospital told Reuters that one of the three survivors who were rushed to the hospital subsequently died from burns and other trauma and the other two were in critical condition. There was no immediate official confirmation.

Family members of the passengers were brought to a private area of the airport terminal on Friday afternoon.

"My daughter is 24, my God, she's only 24!" cried Beatriz Pantoja, whose daughter Leticia was on board the plane, AP reported.

Cubana de Aviación has taken many of its aging planes out of service in recent months because of mechanical problems.

Mercedes Vazquez, Cuba's director of air transportation, told Cubadebate, a state-run news outlet, that the plane was leased from Global Air, which was founded in Mexico in 1990 and operates under the name Aerolineas Damojh, S.A. de C.V.

Cubana has been relying heavily on aircraft rented from other companies since a number of its Russian-made planes were grounded for lack of spare parts.

The spare-parts issue has grounded most of Cubana's Antonov 148 aircraft, which account for six of the company's 14 airplanes.

Two U.S. government - the Federal Aviation Administration and the National Transportation Safety Board - and investigators from Boeing could assist in the investigation if invited by Cuban authorities. It is routine for U.S. investigators and the airplane manufacturer to help with investigations anywhere in the world when a U.S.-made plane crashes.

Boeing said in a statement Friday, "We are aware of news reports out of Cuba and are closely monitoring the situation."

It was the third major aircraft accident in Cuba this decade.

Promoted
Listen to the latest songs, only on JioSaavn.com
Last year, a Cuban AN-26 military transport plane crashed into a hillside in the western province of Artemisa, killing all military personnel on board. In November 2010, a domestic flight, an ATR 72-212 belonging to AeroCaribbean airlines, went down in bad weather over central Cuba en route from Santiago to Havana. All 68 people on board, including 28 foreigners of various nationalities, died in that crash, Cuba's worst in more than two decades.