The country's President Miguel Diaz-Canel, who visited the crash site, warned earlier that many people were feared dead. 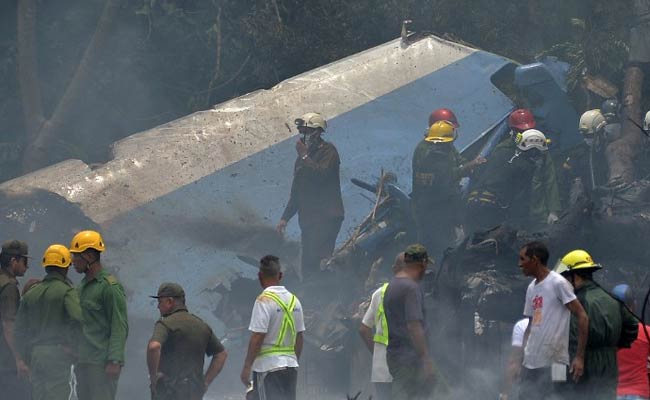 The plane crashed soon after take off from Havana's main airport.

Havana, Cuba: Three people have been pulled alive from the wreckage of a Cuban airliner which crashed after takeoff Friday with 104 passengers aboard, and are in a critical condition in hospital, state media said.

The country's President Miguel Diaz-Canel, who visited the crash site, warned earlier that many people were feared dead.

The Boeing 737 operated by Cubana de Aviacion crashed into a field close to a wooded area near Havana's Jose Marti airport, sending a thick column of acrid smoke into the air, an AFP journalist at the scene said.

The plane was almost completely destroyed in the crash and subsequent fire, which was extinguished by fire trucks which raced to the scene along with a fleet of ambulances.

Firefighters, some still hosing down the burnt fuselage, and rescue workers combed through the wreckage, lending little hope that there could be survivors.

"Three passengers managed to survive the accident. They are in a critical condition. They are already in hospital," the state newspaper Granma said.

What appeared to be one of the wings of the plane was wedged among scorched tree trunks, but the main fuselage seemed to have been entirely destroyed.

Cuba's President Miguel Diaz-Canel, who went to visit the scene, told AFP there was a large number of casualties.

"There has been an unfortunate aviation accident. The news is not very promising, it seems that there is a high number of victims," Diaz-Canel was quoted as saying after his visit.

Diaz-Canel said nine crew members were believed to have been on board, in addition to the passengers.

The 58-year-old president, who succeeded Raul Castro as the island's leader only last month, appeared aghast as he surveyed the recovery efforts, wearing a short sleeved green shirt and surrounded by officials.

State television said the airliner was operated by a foreign crew, but gave no details.

In July 1997 an Antonov-24 passenger plane fell into the sea off Santiago de Cuba. All 44 aboard were killed, including two Brazilians and two Spaniards.

Promoted
Listen to the latest songs, only on JioSaavn.com
That was followed in March 2002 by the crash of a small Antonov-2 plane travelling from Cienfuegos to Cayo Coco crashed in the central province of Santa Clara. All 16 people aboard, among them six Canadian tourists, four Britons and two Germans, were killed.


(Except for the headline, this story has not been edited by NDTV staff and is published from a syndicated feed.)
Comments
Havana Airport crashCuba plane crashHavana