"Never Been So Humiliated": Mother, Baby Kicked Off Flight For Dry Skin

A South Carolinian mother and baby didn't have a doctor's note vouching for a shared genetic skin condition. The airline kicked them off the flight. 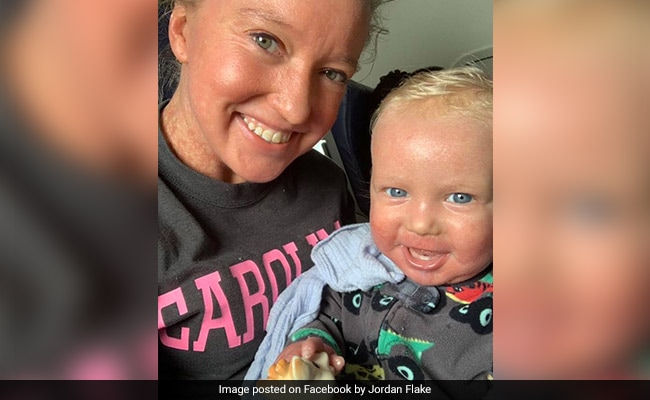 Jordan Flake said "never felt more embarrassed about my skin, or the condition I share with my son."

Rare Disease Day is meant to raise awareness about exactly the kind of genetic skin condition that Jordan Flake shares with her 1-year-old son, Jackson.

The international observance, which fell Thursday, puts the spotlight on "orphan diseases" - disorders that affect a small percentage of the population.

And although Flake said she was glad that her skin condition has garnered attention, she expressed dismay at the incident itself.

"I have never been so humiliated in my life," Flake wrote Thursday in a Facebook post, claiming American Airlines discriminated against her and her child by removing them from a South Carolina-bound flight from Texas. American Airlines said it is looking into the incident and has offered an apology.

On Thursday, after spending several days seeing off her husband before his deployment, Flake and her son began their journey home to Columbia - checking their luggage, passing through security and settling into their seats on the plane, she wrote on Facebook and LoveWhatMatters.com. Flake did not specify whether her husband is in the military.

"We boarded our flight where everyone smiled and talked to Jackson," she recalled in her blog posts.

That changed as the plane readied for takeoff.

Flake wrote on Facebook that an American Airlines employee asked the men in the adjacent seats to get up, then "quietly asked me about 'my rash' and if I had a letter from a doctor stating it was ok for me to fly.

"I explained to him that it was called Ichthyosis and it was a genetic skin condition."

According to the American Academy of Dermatology, ichthyosis is a skin disease that may be inherited or develop from a gene mutation and causes "extremely dry, thick, and scaly skin. The skin often looks like it has fish scales." Ichthyosis is not contagious.

Flake said the airline employee Googled the condition and returned to the crew standing near the jet bridge, where they had a brief discussion.

"He came back and said he apologized, but we 'wouldn't be able to fly,' and we 'had to get off the plane,'" Flake recounted, adding that the employee, who was called by the attendant crew, was "very helpful and mad about the situation."

Even with his help, Flake was unable to retrieve her checked baggage, she said, and she and her son had to stay at a hotel overnight.

American Airlines said the company aims to create a "welcoming environment" for its customers.

"We sincerely apologize to Ms. Flake and her son for the experience they had Thursday, and our team has begun an investigation into the matter," the airline said in a statement Saturday to The Post.

After the incident, Flake wrote on LoveWhatMatters.com that she had "never felt more aware and embarrassed about my skin, or the condition I share with my son."

"I should never feel ashamed of myself for the way I was born," she continued. "This was unacceptable and uncalled for. I have never been asked to show a letter. I have never been told by a doctor that I had to have documentation stating I wasn't contagious, or whatever they were assuming. In 2019, it's time we stop discriminating. Ask questions, and listen.

"If anything comes out of this, I hope it's that whatever individual put this into action realizes they were wrong and unkind, and will think twice next time. If I am not to judge people based on their gender, skin color, or relationship status, then I should not be judged based off of the way I was born."