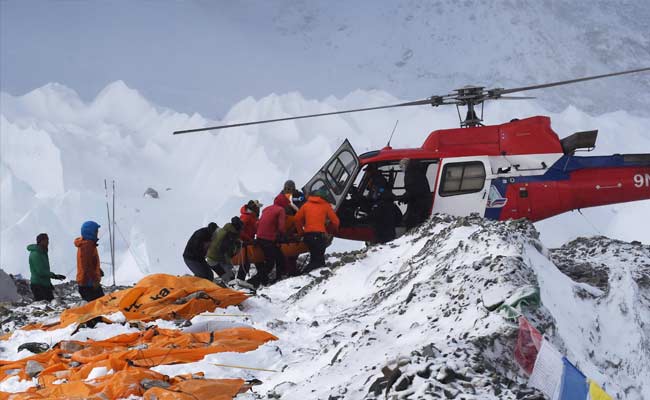 Helicopters have been used to evacuate a number of those stranded at high-altitude climbing and campsites on Mount Everest. (Agence France-Presse)

Lobuche, Nepal: Climbers stranded for two days were plucked Monday from high altitudes on Mount Everest following a deadly quake-triggered avalanche, as exhausted and emotional mountaineers said they were thankful to be alive.

Rescue teams in three helicopters were running missions to Camps One and Two on the world's highest peak following Saturday's avalanche that killed 18 people further down the mountain at base camp, officials said.

The 150-odd stranded climbers, not thought to be seriously injured, were blocked by slabs of ice and snow brought down in the avalanche which damaged their land route back down the mountain.

"We have deployed three helicopters today to bring climbers down from Camp One and Two to base camp," tourism department chief Tulsi Gautam told AFP. "They are safe but we need to bring them down because part of the route is damaged."

Helicopters have already rescued scores of climbers and their teams seriously injured at base camp in the avalanche, which sent a cloud of snow cascading down the mountain.

There were more than 800 people at different altitudes on the 8,848-metre (29,029-foot) peak when the avalanche hit along with several aftershocks.

It was triggered by Saturday's massive earthquake which has killed more than 3,500 people across the country and devasated parts of the capital Kathmandu.

Foreign climbers expressed their gratitude at being rescued as well as sorrow at the lives lost, in an outpouring on social media.

"Evacuated to base camp. Emotionally trashed & all gear swept away. VERY LUCKY to be alive please let everyone know," said 19-year-old British climber Alex Staniforth, whose organisation appeared to be tweeting on his behalf.

US-based climber Jim Davidson said good weather allowed for the evacuations, which were going smoothly. "I am safe in basecamp now... the injuries, fatalities," he tweeted.

Many climbers had travelled to Nepal for the start of the annual climbing season, which was cancelled last year after 16 sherpa guides were killed in what was previously the deadliest disaster in the mountain's history.

Danish climber Carsten Lillelund Pedersen has posted a video on Facebook which appears to show exhausted climbers flanked by rescue workers being helped out of helicopters and walked to safety at base camp.

"My fellow climbers and Sherpas are being rescued down from Camp 1 and they are doing fine," he posted.

An AFP team on assignment at Everest, who were caught in the avalanche, described damage to the route down from base camp as they made their way slowly on foot to the hamlet of Lobuche.

"We are truly stranded here without possibility of walking to Lukla airport as suspension bridges are damaged," South Asia photo chief Roberto Schmidt said in an email exchange.

"Yesterday, not much after leaving base camp, we felt a strong earth movement and a subsequent roar indicative of avalanche," he said.

Schmidt's photographs of Saturday's avalanche show a terrifying cloud of snow roaring towards base camp.

Kathmandu bureau chief Ammu Kannampilly describes the camp covered in snow, boulders and other debris, along with collapsed tents, with porters and sherpas carrying the injured to medical camps.

A guide is heard saying into a radio "Nothing is left, what (we) are supposed to do?"

At least two Americans died in the avalanche, a doctor working for a mountain guide company and a Google executive, their organisations said.

Japan's foreign ministry said that at least one of its nationals was also killed.

Promoted
Listen to the latest songs, only on JioSaavn.com
Tourism official Gautam said the climbing season might again be called off in the wake of the avalanche.

"It is possible that climbing might not continue this year. However, there has been no official decision," he said.