Kobe Bryant was among nine people killed when a helicopter slammed into a hillside in Calabasas, California, the Los Angeles County Sheriff's Department said Kobe Bryant, the basketball icon who won five NBA championships with the Los Angeles Lakers, died in a helicopter crash Sunday, leaving a legacy that spanned 20 years in professional sports and a growing second career as an investor.

Bryant was among nine people killed when a helicopter slammed into a hillside in Calabasas, California, the Los Angeles County Sheriff's Department said. He was 41. Also among the victims were his 13-year-old daughter, Gianna, another parent and a teammate from Gianna's travel sports team.

"The NBA family is devastated," NBA Commissioner Adam Silver said in a statement. And in a sign that Bryant's impact went deep into the city where he made his career, Los Angeles Mayor Mayor Eric Garcetti said he "will live forever in the heart of Los Angeles, and will be remembered through the ages as one of our greatest heroes."

A 6-foot-6 small forward, Bryant was a gifted scorer whose intensity and work ethic became lore throughout the sports world. He entered the NBA in 1996 directly out of high school, and as the youngest player in the league had an almost-immediate impact for the Lakers. At the time the team was looking for the next star to continue a run of legends that included Jerry West, Wilt Chamberlain, Kareem Abdul-Jabbar and Magic Johnson.

Most people will remember Kobe as the magnificent athlete who inspired a whole generation of basketball players. But I will always remember him as a man who was much more than an athlete. pic.twitter.com/9EZuwk8wrV

Bryant delivered. During his 20-year pro career he won -- in addition to his NBA titles -- two gold medals in the Olympics, two NBA Finals MVPs and a regular season MVP in 2008. He led the league in scoring twice and retired with 33,643 points -- third on the league's all-time scoring list until he was passed this weekend by LeBron James. He wore two jerseys for the Lakers -- No. 8 and No. 24 -- and the team retired both.

His career was not without controversy. In 2003, he was accused of sexually assaulting a 19-year-old hotel employee in Colorado. Bryant said the encounter was consensual, and criminal charges were dropped when his accuser refused to testify. She later filed a civil suit against him, and the two sides settled out of court, with Bryant issuing an apologybutadmitting no guilt.

The rape case created a complex legacy for Bryant, who repaired his reputation both on the court, and off it, becoming a celebrated investor and businessman. He co-founded a venture capital firm in 2013 and in 2018 wonan Academy Award for best animated short for 2017's "Dear Basketball," based on a poemhe wrote announcing his retirement. 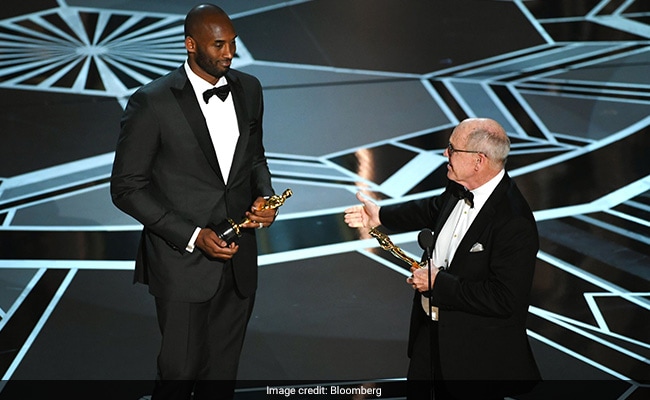 Bryant's immense popularity, including overseas in China, made him a valuable endorser even after he finished playing. No partnership was as big as his long-time relationship with Nike Inc. Bryant signed with the company in 2003 and became one of the sneaker-maker's most important athlete endorsers. Nike built an entire apparel line around Bryant, and released more than 10 signature Kobe shoes.

"He was one of the greatest athletes of his generation and has had an immeasurable impact on the world of sport and the community of basketball," the company said in a statement.

Bryant's name was the first to be mentioned on-stage at the Grammy Awards on Sunday evening, when singer Lizzo dedicated the night to him before opening the show with a two-song performance. His two retired basketball jerseys were illuminated in Staples Center, home of the Lakers.

Kobe Bean Bryant was born in Philadelphia on Aug. 23, 1978. Son of a professional basketball player, Bryant moved to Italy when he was 6 after his father took a job with a team in Rieti. Fluent in Italian, Bryant returned to the U.S. in 1991, and starred as a high schooler for Philadelphia's Lower Merion High School.

He was drafted 13th overall in 1996 by the Charlotte Hornets, who traded him to the Lakers -- the only team he would ever play for. Even early in his career, his work ethic set him apart from others. Longtime NBA coach Byron Scott recalls finding Bryant, when he was 18, shooting alone in an empty gym two hours before practice.

"I go out to the court and I look, and there's Kobe Bryant, he's out there shooting in the dark," Scott told Business Insider in 2017. "I stood there for probably about 10 seconds and I said, 'This kid is going to be great.'"

Paired with Hall of Fame center Shaquille O'Neal, Bryant won his first NBA title in 2000, the first of three straight that the team would win. After O'Neal departed, Bryant went on to win two more, in 2009 and 2010. He was named the finals MVP for both.

Outside of the championships, Bryant's career contains a number of legendary NBA moments. In 2005, he outscored the Dallas Mavericks 62-61 through three quarters of a regular season game. A month later he scored 81 points in a game against the Toronto Raptors, the closest any player before or since had come to touching Chamberlain's record 100.

In 2013, he tore his Achilles tendon against the Golden State Warriors, and hit two free throws before leaving the game. It's just one of many examples of how Bryant fought through injuries in his career. Former Lakers teammate John Celestand remembers another, when Bryant broke his wrist during the 1999-2000 season. 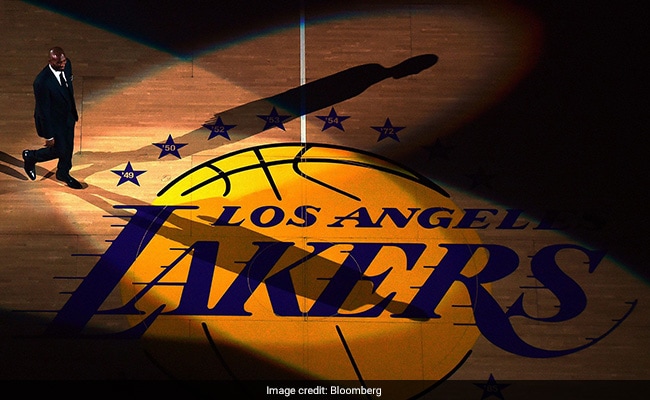 Kobe Bryant walks out on the court to retire his #8 and #24 jerseys at the Staples Center in 2017.

"I am ashamed to say that I was excited the day after his injury because I knew that there was no way that No. 8 would be the first to practice, if he would even be there at all," Celestand wrote in 2005 blog post. "As I walked through the training room, I became stricken with fear when I heard a ball bouncing. No, no, it couldn't be! Yes it could. Kobe was already in a full sweat with a cast on his right arm, and dribbling and shooting with his left."

Bryant began investing long before he retired from the NBA. Those who worked with him said he showed the same intensity and work ethic in pitch meetings that he used to show on the court. He'd frequently cold-call CEOs and business leaders -- including former Nike Chief Executive Officer Mark Parker, former Apple Inc. executive Jony Ive, and media moguls Oprah Winfrey and Arianna Huffington -- to learn more about their business.

Among his most successful investments was an early stake in the sports drink-maker BodyArmor. He reportedly put $6 million into the company in 2014, a stake that was worth an estimated $200 million after Coca-Cola took a majority stake in BodyArmor four years later.

"It's the same mentality" as playing basketball, Bryant told Bloomberg Businessweek of his investing back in 2018. "You win one championship, you can go on vacation all summer long or be in the gym the next day working on winning the next one. That same mentality carries through to what we are doing today, to me being here now."

He dabbled in media as well, launching a production company called Kobe Studios.

Bryant leaves behind a wife, Vanessa, and three surviving daughters -- Natalia, Bianka and Capri, who was born last year.

The National Transportation Safety Board said it dispatched investigators to the crash site.

The superstar, his daughter and other passengers were traveling in a Sikorsky S-76B, a popular helicopter for commercial uses that has been used for decades. The helicopter identified by flight-tracking website Flightradar24 is owned by Island Express Holding Corp. in Van Nuys, California, according to Federal Aviation Administration records.

Flightradar24 said preliminary data indicated the helicopter had taken off from John Wayne Airport in Orange County, just south of Los Angeles, at 9:06 a.m. local time. It flew over Los Angeles and Glendale, then over the San Fernando Valley before turning toward the rugged Santa Monica Mountains near Malibu. 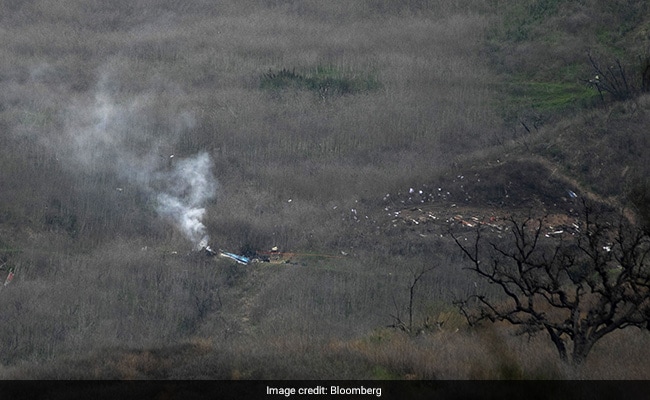 Wreckage of the crashed helicopter in Calabasas, California.

In its last recorded position at 9:45 a.m., the helicopter was at 1,700 feet altitude and flying at 176 miles per hour. Photos of the crash site show that it hit an undeveloped hillside.

The final tweet on Bryant's personal account referred to James's achievement on the court this weekend passing him as No. 3 on the all-time NBA scoring list.

In 2010, Bryant spoke with Yahoo! Sports about his legacy.

"When my career is over, I want them to think of me as an overachiever despite the talent that I have," Bryant said. "To think of me as a person that's overachieved, that would mean a lot to me. That means I put a lot of work in and squeezed every ounce of juice out of this orange that I could.